The Intertwined History of Rogers Park and the West Ridge Communities of Chicago.

CONNECTION SUMMARY
On April 29, 1878, Rogers Park was incorporated as a village in Illinois governed by six trustees. At one time, West Ridge was adjoined with neighboring Rogers Park, but it seceded to become its own village in 1890 over a conflict concerning park districts (known as the Cabbage War) and taxes. Rogers Park was annexed to Chicago on April 4, 1893, along with West Ridge, each becoming one of Chicago's 77 communities.

THE WHOLE STORY
Rogers Park originated when the 1816 Treaty of St. Louis was signed by the tribes of the Chippewa, Ottawa, and Potawatomi Indians, stating they were to cede a 20 mile wide and 70 miles long strip of land to the United States, which connected Chicago and Lake Michigan with the Illinois River. The northern Indian Boundary Line ran west by southwest, from what is now Rogers Avenue from Lake Michigan through what is now Indian Boundary Park in the West Ridge community and eventually to the Des Plaines River.
Between the late 1830s and his death in 1856, Irishman Phillip Rogers purchased approximately 1,600 acres of government land, part of which formed the basis of Rogers Park.

During the 1830s and 1840s German and Luxembourger farmers settled in the area. A small community known as Ridgevill (encompassing parts of Rogers Park and Evanston) grew up around the intersection of Ridge and Church Road. (Church Road was the original name of Devon Avenue before being renamed in the 1880s by Edgewater developer John Lewis Cochran who named it after 'Devon Station' on the Main Line north of Philadelphia.)

The Great Chicago Fire of 1871 brought a wave of people to the Rogers Park area, looking for new homesteads. In 1872 Rogers' son-in-law, Patrick Touhy, subdivided part of Rogers Park and sold 225 acres of land east of Ridge to a group of businessmen.

Several hundred people lived in the area, many still farming, but many others were commuting to jobs in Chicago. Rogers Park extended west to the larger of two geological ridges running relatively parallel with Lake Michigan's shoreline. The smaller Ridge is known today as Clark Street, while the larger is Ridge Boulevard.

The village of Rogers Park was incorporated in 1878 by original members of Rogers Park Building & Land Company; John Villiers Farwell, Luther Greenleaf, Stephen Purrington Lunt, Charles H. Morse, and the brother's Paul Pratt and George Pratt, all of whom have a street named after them.

As early as 1886, some farms gave way to buildings and two-story homes; others continued into the 1900s, with fields and greenhouses "neighboring" comfortably with newer brick buildings.

West of Rogers Park was unincorporated land. While considered an extension of Rogers Park, "North Town" (not the current Nortown) didn't have an identity and remained relatively rural throughout the 19th century. St. Henry's Roman Catholic Church served as the community's religious and social center. West Ridge (inaccurately called "West Rogers Park" by some today; which is a neighborhood within the West Ridge community), as it's named, was home to Rosehill and St. Henry's cemeteries and the Angel Guardian Orphanage. Truck farms, greenhouses, and the open prairie characterized much of the area.

Disagreements with Rogers Park about taxes for park districts (known as the Cabbage War) led to the incorporation of West Ridge as a village in 1890.

Chicago annexed Rogers Park and West Ridge on April 4, 1893. Unlike in Rogers Park, annexation did not bring rapid growth to West Ridge. The number of residents remained under 500 until after 1900. No prominent business districts existed, as community members relied on either Rogers Park or Evanston for their goods and services. 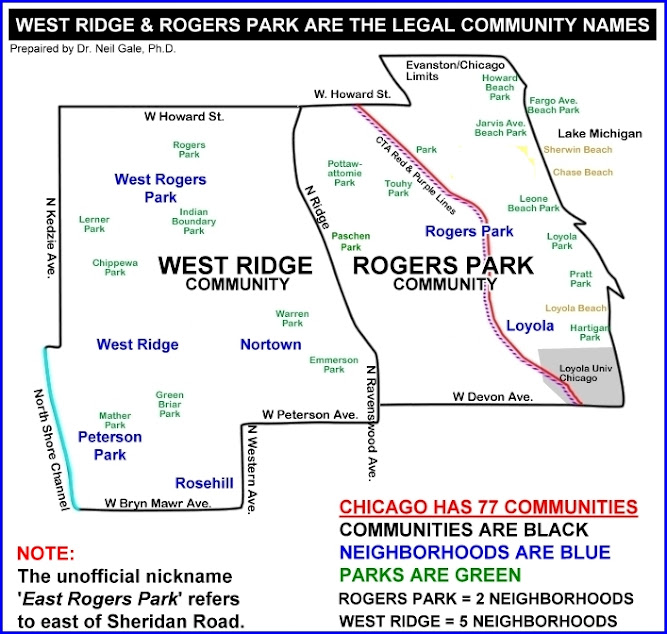 On August 8,  1894, at 9:30am, the fire wiped out an entire block of Rogers Park. The Town Hall, Livery Stable, John Lindley's Store, Phillips Mill, Sharp Bros' Store, Drug Store, and Foote's Grocery, along with factories and dwellings, fourteen in all, while ten families were driven out homeless. 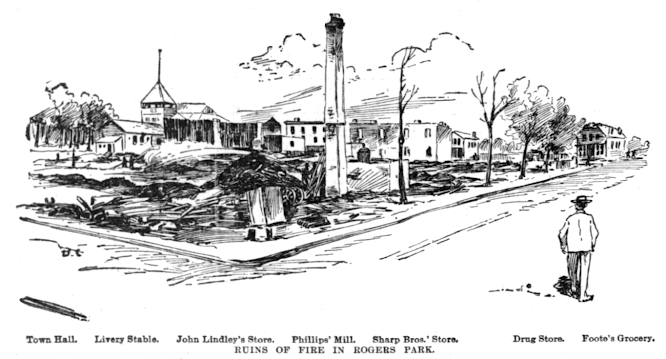 The property loss was estimated at $34,550 ($993,410 today), but during the excitement, many persons narrowly escaped injury while five were hurt. During the rebuilding process, West Ridge and Rogers Park split over a public park permit issued to Rogers Park in 1895. The West Ridge farmers opposed the permit because they did not wish their tax money to be used to improve the lakefront property. They subsequently applied for a license for their own park district west of the Chicago and North Western tracks. Notably, at this time, there was no unified Chicago Park District, and it was common for local communities to create separate park authorities, which would sometimes compete for tax dollars to develop and maintain parks.

At the rate the native white birch trees are dying out on the east side where formerly such fine groves existed, it will not be a great while before all will be gone. —Rogers Park News-Herald, June 29, 1900

The construction of Sheridan Road led to some development, but the area's population was sparse until 1906 when the Jesuits founded Saint Ignatius Parish and Loyola University. Developments in 1908 inspired the real transformative year for Rogers Park. The city of Chicago extended the Red Line from Wilson to Evanston, adding four stops in Rogers Park.

The pace of growth quickened in West Ridge after 1900. Brickyards, formerly located along the North Branch of the Chicago River, moved into the area of present-day Kedzie Avenue to take advantage of the sand and natural clay deposits. The construction of the North Shore Channel of the Sanitary District of Chicago in 1909 increased the amount of clay available. Scandinavian and German workers moved from other parts of Chicago to find jobs in the expanding brickyard operations, and workers' cottages appeared in the western part of the community. Real-estate interests began to market West Ridge both locally and nationally.

On May 5, 1915, Chicago annexed the area north of Howard Street, east of the "L" tracks, and south of Calvary Cemetery, known as "No Man's Land." The South Evanston area became known as 'Germania' and became home to well-off German and Jewish residents and brought Rogers Park and Chicago a new northern boundary. No Man's Land was identified by the United States Geological Survey as being a variant name of the Howard District.

Just after the "L" was extended, between 1910 and 1930, the demand for townhouses and apartment buildings skyrocketed. Rogers Park was able to stand as a neighborhood of its own as the "L" made nightlife activities easily accessible, and the construction of theaters gave Rogers Park dwellers constant entertainment. Industry throughout the area meant workers could work close to home, and Catholic and Protestant churches and the Jewish synagogues accentuated the neighborhood with religious diversity.

At the end of World War I triggered a real-estate boom in West Ridge. Brick bungalows and two-flats became the dominant residential structures in the neighborhood. Apartment buildings also appeared, but relatively poor transportation facilities in the area before 1930 limited the demand for large multiunit buildings. By the end of the 1920s, Park Gables and several Tudor revival apartment buildings clustered around Indian Boundary Park. A tennis club built in the Tudor revival style opened at 1925 West Thome Avenue. A business district along Devon Avenue (Cool photo from 1914 looking east on Devon from Western) also developed during this period as the area's population swelled from about 7,500 in 1920 to almost 40,000 by 1930, and local residents looked to their own community for goods and services.

Unlike many Chicago communities, West Ridge grew steadily during the 1930s. However, population growth and economic development did not alter the overwhelming residential character of the community. The area has no manufacturing establishments, and its economic base remains primarily commercial. Population growth necessitated more housing units, and larger, multiunit structures appeared. One of the most significant residential construction projects in Chicago during the 1930s, the Granville Garden Apartments in the 6200 block of Hoyne Avenue, was built in 1938 to help meet the need for housing.

West Ridge continued to draw families. In 1949, Hollywood Kiddieland opened on McCormick Boulevard and Devon Avenue. The mid-1950s saw Bounceland, a trampoline park, open on Devon Avenue just east of Lincoln Avenue. Beginning in the 1950s through the late 1970s, there were 15 Bakeries on Devon Avenue (◄─ names and addresses) between Kedzie and Ridge Avenues, under two miles in the distance, in West Ridge.

A small part of West Ridge's, West Rogers Park neighborhood was known as the "Golden Ghetto." The boundaries were Pratt Boulevard to the north, Western Avenue to the east, Peterson Avenue to the south, and Kedzie Avenue to the west. The name came from the thriving Jewish Community from about 1930 to the mid-1970s, when the Jewish migration to the northern and northwestern suburbs in the mid-1960s became noticeable.
NOTE: Chicago NEVER referred to its communities or neighborhoods by "Parish" names.
VISIT OUR SOUVENIR SHOP
Compiled by Dr. Neil Gale, Ph.D.

'The Birdcage' Apartments at 6901 North Ridge Boulevard (at Farwell) in Chicago was built by architect Don Erickson in 1959.

The History of the Edgewater Golf Club (Today's Warren Park) in Chicago, Illinois.

The History of Chicago / Evanston Telephone Exchanges Including their Two-Letter Codes and Meanings.

"The Spirit of the Fighting Yank," WWII Memorial in Chicago, Illinois.