The Chinese Takeout Box, a Chicago Invention by Frederick Weeks Wilcox in 1890. 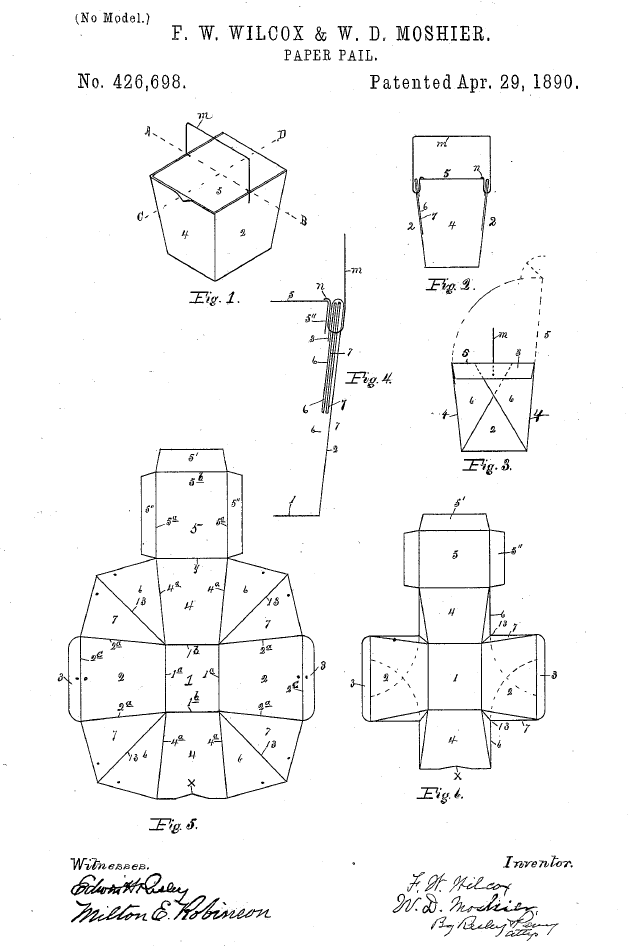 The Japanese-influenced origami folded container is uniquely a Chicago invention. Frederick Weeks Wilcox, Frederick W. Wilcox, 9360 Longwood Drive (at 94th Street), Chicago - TEL: Longwood 1262, patented what he called a “Paper Pail,” in 1890. It was a single piece of paper, creased into segments, and folded into a (more or less) leakproof container secured with a dainty wire handle on top. The supportive folds on the outside, fastened with that same wire, created a flat interior surface over which food could slide smoothly onto a plate.
Use by Chinese restaurants "Chinese Takeout Box," and Oyster Houses [1] new style "Oyster Pails" for food orders or left-overs to be taken out of the restaurant.


How to Eat Chinese Takeout.
Wilcox’s paper box seems to have been an advance in existing “oyster pail” technology. The oyster pail, as described by Ernest Ingersoll in his 1880 book: “The Oyster Industry used a wooden receptacle with a locked cover which was used in transporting raw oysters.”
At any rate, the paper oyster pail and the incipient Chinese-food industry — which was beginning its meteoric rise in the early 20th century — seemed made for each other. “It’s nearly leakproof, and it’s disposable, and they’re really inexpensive,” says Michael Prince, who redesigned the Box O’ Joe Coffee carton for Dunkin’ Donuts. “Origami can make a really cool transport device.”

In the 1970s, a graphic designer (whose name, sadly, has been lost to history) working at the company now known as Fold-Pak, put a pagoda on the side of the box and a stylized “Thank you” on top. Both were printed in red, a color symbolic of good fortune in China, where oyster pails are little known. 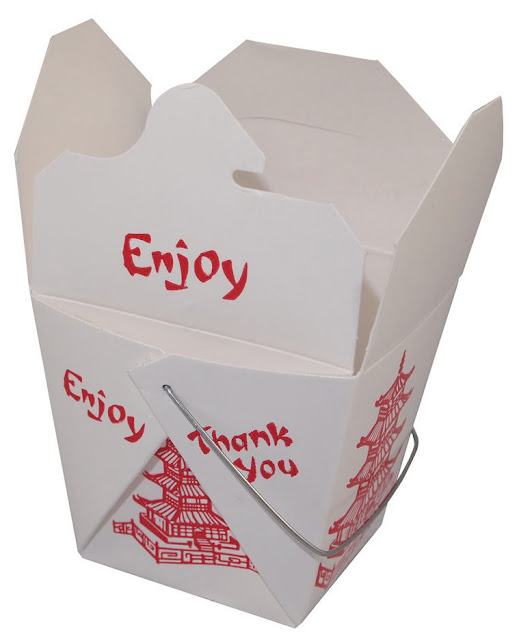 And thus was forged the great paradox: “The structure has come to represent the idea of Eastern cuisine in Western society even though this packaging is not used for food containment in Chinese culture,” says Scott Chapps, designer of packaging for Help Remedies. Or, as David Federico, marketing manager for Fold-Pak, put it, “We don’t sell them in China.”

Today Fold-Pak makes oyster pails in much the same way Wilcox suggested, albeit using solid-bleached-sulfate paperboard with a poly-coating on the inside for more grease- and leak-resistance. The company has also made adjustments for modern-day behaviors: it offers microwave-safe Chinese-food cartons that use glue instead of wire and non-dyed, environmentally friendly containers. It’s a growing market, Federico says. But the traditional takeout container doesn’t seem bound for extinction. “In America, if you just drew an icon of a box, people would understand exactly what it is,” Prince said. “That’s a lot of power.”

[1] Chicago Oyster History.
New Englanders settle in Chicago, bringing with them a taste for oysters. Chicago had become a huge oyster town, with large multilevel oyster houses. These houses would have a dance hall, lunchroom, formal dining, and taprooms in one huge building.
Delivered by sleigh from New Haven, Connecticut, the first fresh oysters in Chicago were served in 1838 at the Lake House Hotel on Kinzie Street. The Lake House Hotel establishment was our city’s first foray into (5-Star) fine dining and offered these East Coast imports to their well-heeled clientele. It was the first restaurant to use white tablecloths, napkins, menu cards, and toothpicks.
This spurred Chicago’s earliest love affair with the oyster. By 1857, there were seven "Oyster Depots" and four "Oyster Saloons" in the city. Chicago's population in 1860 was 109,000. Peaking in the Gilded Age of the 1890s, with a population of 1,001,000 in 1890, and waning with Prohibition, oyster consumption was plentiful in old Chicago. Believe it or not, Ice cream parlors also served oysters because they had all that ice.

NOTE: I've been asked several times; "How fresh oysters could be coming from the east coast in 1835?"
First of all, oysters were kept alive on Ice while being transported. If an oyster's shell opens, they die. Dead oysters carry dangerous bacteria for humans.
In the 1890s express-service refrigerated train cars shipped oysters and other perishable foods around the country. The cars did not come into general use until the turn of the 20th century.