Hello. My name is Dr. Neil Gale, Ph.D. As a child, I had no interest in History. Like many of us, I found learning History in elementary school boring. I didn't think remembering dates, names, and events would be helpful as an adult... "in the real world." History was not captivating or even interesting to me. Many teachers didn't try to make learning history fun or exciting and didn't present the "results" of historical events.

But, at seven, I began collecting antique and vintage Chicago postcards (Chicago proper - no suburbs). My mom and aunt would take me to many antique and collectible shows.

The first time I found an antique dealer's booth with tables full of boxes filled with postcards from around the country, I parked myself on one of his folding chairs in front of the many boxes marked "Chicago, Illinois." After about two hours, my mom returned to the dealer's booth to find me still looking through and reading the postcards.

Postcards were very reasonable back then, mostly 10¢ to 25¢ per postcard, so I could buy a few with my own money. I found it fascinating that I was looking at images that were 50 years old or older and knew the present locations and what they currently looked like. I now have approximately 5,000 Chicago-only postcards.

By the time I was in High School, I had developed an interest in American History. Still, the teaching methods mainly were memorization. On my own, I learned how to research historical events, places, and people. I spent many Saturdays at the Chicago Historical Society, researching Chicago history and the 1893 Chicago World's Columbian Exposition. I frequented the library so often and put in many hours per visit that the library administrator gave me a library card at no charge since I wasn't a member of the CHS.

My senior year in High School was the first year of the Chicago Metro History Fair, which included schools from the entire Chicagoland area. My project analyzed why the 1933 Century of Progress World's Fair opened for a second year. I had many of my postcards and a research report on the financial profitability of the World's Fair at the end of the Great Depression and Prohibition. I highlighted the benefits to the City of Chicago and to the state of Illinois.
I won the regional first and second rounds, receiving a Certificate for 'Outstanding Historical Ability and Performance"' with an Honorable Mention.
In the History Fair's finals, held at the old Chicago Cultural Center (renamed from Chicago Main Public Library in 1977), I received an 'Outstanding Achievement Award.' 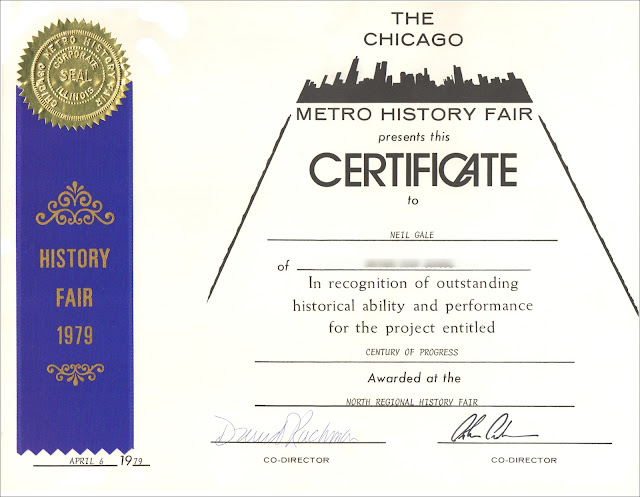 The Chicago Metro History Fair's finals were held at the Chicago Cultural Center (renamed from Chicago Main Public Library in 1977). I received a "Certificate for Outstanding Achievement" Award.

As my Chicago postcard collection grew to over 5,000, I wanted to share some unique Chicago postcards. I opened the Chicago Postcard Museum on November 1, 2007. The Virtual Museum is constructed with lobbies, galleries, rooms, and exhibit halls, just like walking into a brick-and-mortar Museum. Special presentations and collections of extremely rare, antique, and vintage postcards will be displayed. 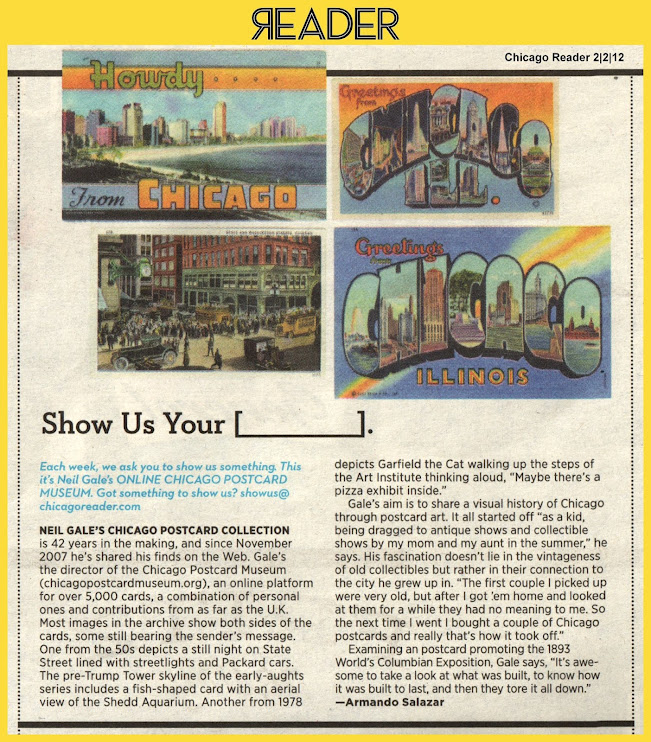 REJUVENATING ILLINOIS HISTORY
As a historian and author, I enjoy learning about Illinois history and presenting the stories and photographs that make Illinois' History come alive. In my opinion, the next evolution of a modern-day historian is to interact with History by allowing others to add to the richness of the article presentations with additional facts, photographs, and personal and family experiences. This is where a Facebook group excels by allowing feedback, comments, videos, photographs, and images to be added to the presentations, enriching the experience of all readers.

The resources below help students research and prepare for the Chicago Metro History Fair and the Illinois Regional History Fairs (aka History Day), all leading up to the state finals competition on Illinois History Day held in Springfield, Illinois, each May.

In October 2012, I started the Facebook group and named it Living History of Illinois and Chicago®. People worldwide and from all walks of life have joined to participate in this social history venue, forming one of the most interesting educational and entertaining groups on Facebook. The group hosts Junior and Senior High School (6th-12th grades) history and social studies classes with their educators for lesson plans.

I've recruited dozens of Illinois community, township, and county Historical Societies, History Museum Directors, Museum Curators, and career Historians to join the group. Many members are in public service, including Mayors and former Mayors from towns and cities all over Illinois. In addition, the group is loaded with local media broadcasters, including news anchors and researchers from NBC, ABC, CBS, and other TV and cable networks, plus radio personalities from around the state. The group boasts of having several professional photographers who share their own photographs.

In 2013, I started the Digital Research Library of Illinois History®. The library includes my personal research papers, including a series about 'Lost Town of Illinois,' 'Chicago's Forgotten Neighborhoods,' and 'Defunct Amusement Parks of Illinois.' The library's goal was to be a prime Illinois history resource for students and educators.

Because of Facebook's restrictions on each group's number of posted images stored (approx. 5,000 per group), the oldest ones are deleted when new ones are posted. I found it necessary to create a way of "Saving Illinois History, One Story at a Time" before the posts on Facebook is deleted. On November 6, 2016, I founded the Digital Research Library of Illinois History Journal™. The Journal presents Illinois history in a friendly format. Being membership-free, anybody online can add their comments to the articles in the Journal.

I offer our members and the general public a free Daily Illinois Newspaper. The Living History of Illinois Gazette™ has current news from all over Illinois.