Before we begin discussing the Great Chicago Fire, let's talk about the summer of 1871, which marked a fourteen-week drought; the fire department was taxed daily. The wood-constructed Chicago was a dry tinder box.

The devastating "Burlington Warehouse Fire" occurred on September 30, 1871. Twenty fires in one week, three on October 4, four on October 5, and five on October 6.

An alarm sounded sometime between ten and eleven o'clock on the night of October 7, the "Saturday Night Fire" for 209 South Canal Street. The entire area from Jackson, Adams, Clinton Street, and the River was ablaze within twenty minutes of the fire's discovery. Even though the firefighters were totally exhausted, they fought unceasingly, eventually preventing the fire from crossing Adams to the north. Too short of recovery time to put the apparatus back in service and insufficient rest left the firefighters thoroughly spent for what they were to encounter in just a few hours, the Great Chicago Fire.

On October 8, 1871, Chicago endured one of the worst urban fires in American history. Maximizing tinder-dry conditions, a gale-force wind turned a small fire into a huge disaster. Almost four square miles of the city were destroyed. Approximately 300 people died, and the entire business district was wiped out.

Chicago had come a long way since Jean Baptiste Pointe de Sable, the first settled near Lake Michigan on the Guarie River in 1788. He built a house closer to the lake and sold it to John Kinzie.

Chicago prospered from a small settlement of local Indians who called this place Chicagoua
into a major transportation center (40 years later).

As the Civil War (1861-1865) neared its end, Chicago was "the metropolis of the northwest." By 1868, little was stopping the city's growth. The three branches of the Chicago River formed a kind of boundary for the town. The south branch divided the rural part of south Chicago (where the O'Leary family lived) from the urban part.

In 1871, Chicago had over 330,000 inhabitants. Its fire department and equipment were "modern" for the time, but the city employed only 185 fire-fighting personnel. On the night of October 7, before the big fire on the 8th, a fire broke out at Lull & Holmes Planing Mill at what is now 209 South Canal Street. Some of the city's equipment was damaged while the already overworked, understaffed fire-fighting crews were battling that blaze.
It's generally acknowledged that the fire started in the O'Leary barn, but no one is sure how it started. There is the belief that Mrs. O'Leary's cow kicked over a lit lantern. But there is no proof of this claim. 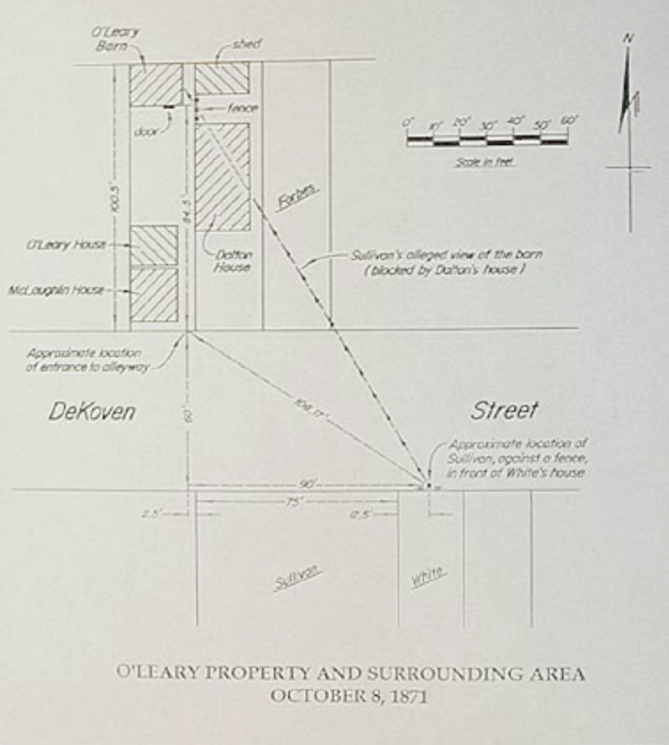 Patrick and Catherine O'Leary lived with their five children in the rear of this house at 137 DeKoven Street (Today: 558 West DeKoven Street), Chicago. They rented out the front two rooms. They owned five cows, nameless, which grazed in the yard. This was common for near-westside Chicago dwellers - like the O'Learys - before the Great Fire of 1871. Owners relied on their living-within-the-city animals for fresh milk and eggs. They would either consume the products themselves or sell them to their neighbors. Both the above photographs, circa 1870, depict such a homestead within Chicago's city limits.

Daniel ("Peg Leg") Sullivan first saw the flames coming, he said, from the O'Leary barn. Yet, when one considers Sullivan's line of sight to the barn (see illustration), it's doubtful he could even see the O'Leary property. Maybe he really wasn't where he said he was. Along those lines, a recent study blames Sullivan himself. Did he go to the O'Leary barn to feed his mother's cow that night? If so, did he smoke there and inadvertently start the fire? Historians have always considered the drought and an out-of-control brush fire as the likely cause. That was at least part of the official findings after concluding the investigation.
Cornelius "Pudgy" O'Leary (1858-Unknown) was the unnamed son of Patrick and Catherine O'Leary. Rumors claimed the Pudgy accidentally started the Chicago fire while playing cards in the barn, and no proof was ever verified.
Per the "Find-A-Grave" website, Catherine and Patrick O'Leary's children were:
In 1880, he was a prisoner at the House of Correction in Chicago, Cook County, Illinois. Around 1883, Kate Snyder (also known as Kate Campbell) gave birth to a child that was said to have been fathered by Cornelius. The child died in infancy. On August 23. 1885 in Lake, Cook County, Illinois, Cornelius shot Kate Snyder and his sister Mary (O'Leary) Scully. Kate died, and Mary was taken to the County Hospital in Chicago, where she died on August 24, 1885. On September 22, 1885, Cornelius was captured in Kansas City. He was brought back to Chicago on September 27, 1885. He claimed not to know anything about the murder. On December 24, 1885, he pleaded guilty to the double murder. He was sentenced to forty years in prison, which could be reduced to twenty years on good behavior. He was taken to the penitentiary in Joliet, Illinois, on January 7, 1886. He was taken to an insane asylum on December 2, 1889. What happened to Pudgy after being moved to the asylum is unknown, as is where and when he died or where he was buried.

Ironically, O'Leary's house, located at 137 DeKoven Street, was spared from the fire.

Whatever the cause, a combination of failures worked against Chicago that night. An elaborate fire alarm system - dependent on human input - failed. The alarm closest to the O'Leary farm (Box 295) was never rung. Firefighters near DeKoven Street learned about the fire when they saw it. All available men and equipment were fighting a losing battle on the south side. No one dreamed the fire would jump the River, and no one was there to combat the growing wall of flames when it did.

People were awakened by the fire. Many left their homes with shawls and blankets around them. People fleeing certain death spent the night among the cemetery dead - at Potter's Field, near Lincoln Park - close to the Lake Michigan shore. The Chicago Tribune was burned out of its building. Citizens, in a panic, tried to flee over the Randolph Street Bridge.

There was a heartbreaking loss of life as entire families could not escape. A hundred thousand people who had enjoyed an unseasonably warm and beautiful Sunday were homeless by Sunday night.

When the Chicago Fire started, Mary Todd Lincoln (widow of President Lincoln) was residing at her son Robert Lincoln's house on Wabash. Read what happened.

Fleeing people thought they'd be safe in Lake Michigan, and they weren't. Some never came out of the water. The intense heat from the burning buildings, even the flames from them, reached the water and even stretched out over it. The fleeing men, women, and children rushed into the lake till nothing but their heads appeared above the surface of the waters, but the fiery fiend was not satisfied. The hair was burned off the heads of many, while some never came out of the water alive. Many who stayed on the shore, where the space between the fire and water was a little more expansive, had the clothes burned off their backs.

The Meteorite Theory
Recently the idea of a disintegrating comet, with falling meteorite debris, has resurfaced as a possible cause, first suggested in 1883. A 58½ pound meteorite was allegedly found on the shore of Lake Huron. At the time of the fire, people said they saw burning material falling from the heavens. The fire burned approximately 1.2 million acres, with the number of deaths estimated between 1,500 and 2,500. No one took them seriously, of course. They were just hysterical people, weren't they? Yet the line of actual fires, drawn from the meteorite's Lake Huron location to Peshtigo, Wisconsin, and Chicago, Illinois, makes one wonder about the evidence. Or was it just a coincidence?
The 558 West DeKoven Street Address Years Later
Absolved of Blame
Mrs. Catherine O'Leary and the cow were exonerated (but not Mr. Patrick O'Leary) from starting the 1871 Chicago Fire. The Resolution was signed by Richard M. Daley and the City Council on September 10, 1997.

NOTE: St. James Cathedral at 65 E Huron St., Chicago, was gutted when the Great Chicago Fire erupted. Nothing was left but the stone walls, the Civil War Memorial, and the bell tower, whose bells rang for as long as possible, warning the neighborhood of the encroaching fire.
Surviving Structures
The following structures are the only structures from the burnt district that survived the Great Chicago Fire: 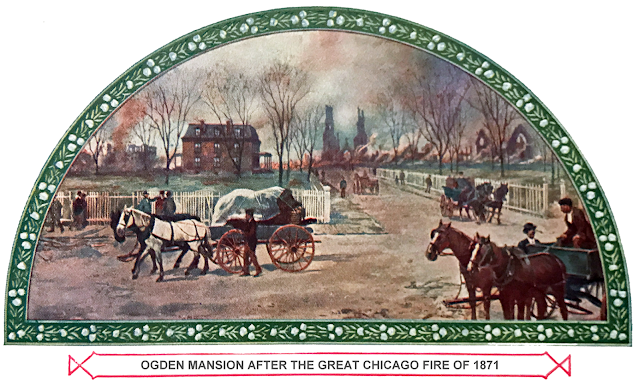 False claims of structures that survived the burnt district of the fire: 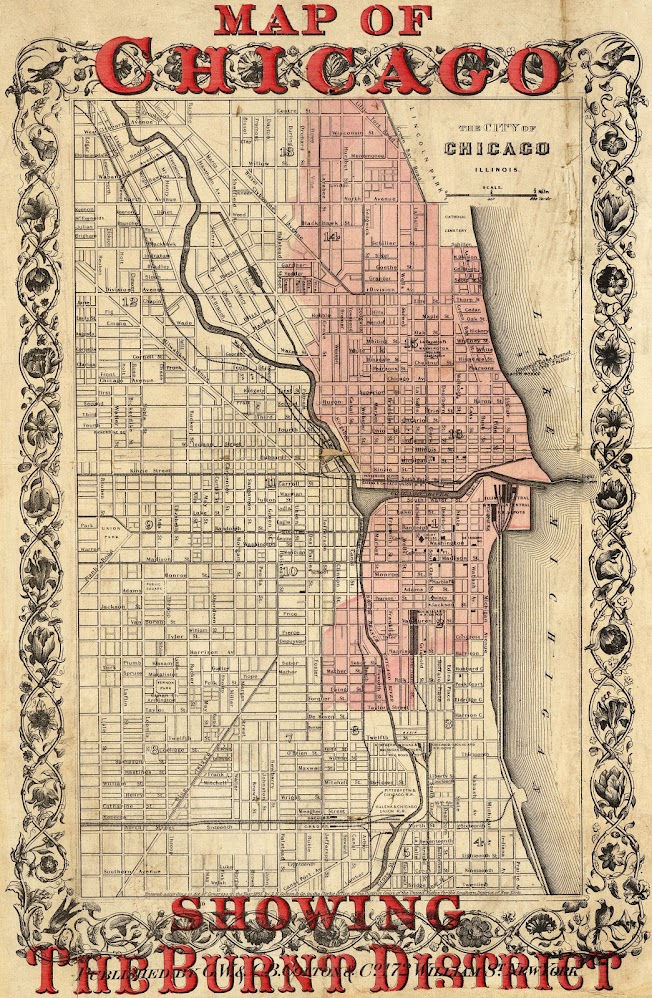