Bessie "Queen Bess" Coleman, the First Black and Native American Woman to get a Pilot License. 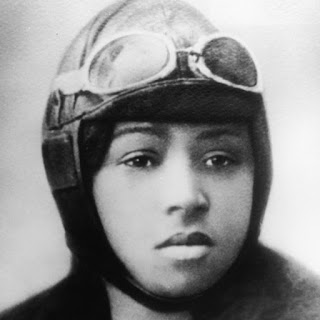 Elizabeth "Bessie" Coleman was born on January 26, 1892, in Atlanta, Texas, the tenth of thirteen children to sharecroppers George Coleman, who was mostly Cherokee and part African-American, and Susan, who was African-American. When Coleman was two years old, her family moved to Waxahachie, Texas, where she lived until age 23. Coleman began attending school in Waxahachie at the age of six. She had to walk four miles each day to her segregated, one-room school, where she loved to read and established herself as an outstanding math student.

She completed all eight grades in that school. Every year, Coleman's routine of school, chores, and church was interrupted by the cotton harvest. In 1901, George Coleman left his family. He returned to Oklahoma, or Indian Territory, as it was then called, to find better opportunities; but Susan and her family did not go along. At the age of 12, Bessie was accepted into the Missionary Baptist Church School on scholarship. When she turned eighteen, she took her savings and enrolled in the Oklahoma Colored Agricultural and Normal University (now called Langston University) in Langston, Oklahoma. She completed one term before her money ran out and she returned home.

In 1916 at the age of 23, she moved to Chicago, Illinois, where she lived with her brothers. In Chicago, she worked as a manicurist at the White Sox Barber Shop. There she heard stories from pilots returning home from World War I about flying during the war. She took a second job at a chili parlor to procure money faster to become a pilot. American flight schools admitted neither women nor blacks. Robert S. Abbott, founder, and publisher of the Chicago Defender encouraged her to study abroad. Coleman received financial backing from banker Jesse Binga and the Defender.

Coleman took a French-language class at the Berlitz school in Chicago and then traveled to Paris on November 20, 1920, so she could earn her pilot license. She learned to fly in a Nieuport 82 biplane with "a steering system that consisted of a vertical stick the thickness of a baseball bat in front of the pilot and a rudder bar under the pilot's feet." On June 15, 1921, Coleman became the first Negro and American Indian woman to earn an aviation pilot's license and an international aviation license from the Fédération Aéronautique Internationale. 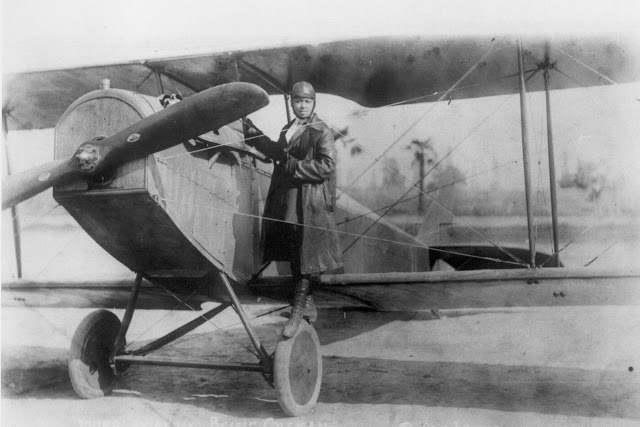 Determined to polish her skills, Coleman spent the next two months taking lessons from a French ace pilot near Paris and in September 1921 she sailed for New York. She became a media sensation when she returned to the United States.

“The air is the only place free from prejudices. I knew we had no aviators, neither men nor women, and I knew the Race needed to be represented along this most important line, so I thought it my duty to risk my life to learn aviation.” — Bessie Coleman

With the age of commercial flight still a decade or more in the future, Coleman quickly realized that in order to make a living as a civilian aviator she would have to become a "barnstorming" stunt flier and perform for paying audiences. But to succeed in this highly competitive arena, she would need advanced lessons and a more extensive repertoire. Returning to Chicago, Coleman could not find anyone willing to teach her, so in February 1922, she sailed again for Europe. She spent the next two months in France completing an advanced course in aviation, then left for the Netherlands to meet with Anthony Fokker, one of the world's most distinguished aircraft designers. She also traveled to Germany, where she visited the Fokker Corporation and received additional training from one of the company's chief pilots. She then returned to the United States to launch her career in exhibition flying.

"Queen Bess," as she was known, was a highly popular draw for the next five years. Invited to important events and often interviewed by newspapers, she was admired by both blacks and whites. She primarily flew Curtiss JN-4 "Jenny" biplanes and other aircraft which had been army surplus aircraft left over from the war. She made her first appearance in an American airshow on September 3, 1922, at an event honoring veterans of the all-black 369th Infantry Regiment of World War I. Held at Curtiss Field on Long Island near New York City and sponsored by her friend Abbott and the Chicago Defender newspaper, the show billed Coleman as "the world's greatest woman flier" and featured aerial displays by eight other American ace pilots, and a jump by black parachutist Hubert Julian. Six weeks later she returned to Chicago to deliver a stunning demonstration of daredevil maneuvers—including figure eights, loops, and near-ground dips to a large and enthusiastic crowd at the Checkerboard Airdrome (now the grounds of Hines Veterans Administration Medical Center, Hines, Illinois, Loyola Hospital, Maywood, and nearby Cook County Forest Preserve).

But the thrill of stunt flying and the admiration of cheering crowds were only part of Coleman's dream. Coleman never lost sight of her childhood vow to one day "amount to something." As a professional aviatrix, Coleman would often be criticized by the press for her opportunistic nature and the flamboyant style she brought to her exhibition flying. However, she also quickly gained a reputation as a skilled and daring pilot who would stop at nothing to complete a difficult stunt. In Los Angeles, she broke a leg and three ribs when her plane stalled and crashed on February 22, 1923.

In the 1920s, in Orlando, Florida on a speaking tour, she met the Rev. Hezakiah Hill and his wife Viola, community activists who invited her to stay with them at the parsonage of Mount Zion Missionary Baptist Church on Washington Street in the neighborhood of Parramore. A local street was renamed "Bessie Coleman" Street in her honor in 2013. The couple, who treated her as a daughter, persuaded her to stay and Coleman opened a beauty shop in Orlando to earn extra money to buy her own plane.

Through her media contacts, she was offered a role in a feature-length film titled Shadow and Sunshine, to be financed by the African American Seminole Film Producing Company. She gladly accepted, hoping the publicity would help to advance her career and provide her with some of the money she needed to establish her own flying school. But upon learning that the first scene in the movie required her to appear in tattered clothes, with a walking stick and a pack on her back, she refused to proceed. "Clearly ... [Bessie's] walking off the movie set was a statement of principle. Opportunist, though she was about her career, she was never an opportunist about race. She had no intention of perpetuating the derogatory image most whites had of most blacks" wrote Doris Rich.

Coleman would not live long enough to establish a school for young black aviators but her pioneering achievements served as an inspiration for a generation of African-American men and women. "Because of Bessie Coleman," wrote Lieutenant William J. Powell in Black Wings (1934), dedicated to Coleman, "we have overcome that which was worse than racial barriers. We have overcome the barriers within ourselves and dared to dream." Powell served in a segregated unit during World War I, and tirelessly promoted the cause of black aviation through his book, his journals, and the Bessie Coleman Aero Club, which he founded in 1929.

On April 30, 1926, Coleman was in Jacksonville, Florida. She had recently purchased a Curtiss JN-4 (Jenny) in Dallas. Her mechanic and publicity agent, 24-year-old William D. Wills, flew the plane from Dallas in preparation for an airshow but had to make three forced landings along the way because the plane had been so poorly maintained. Upon learning this, Coleman's friends and family did not consider the aircraft safe and implored her not to fly it. On take-off, Wills was flying the plane with Coleman in the other seat. She had not put on her seatbelt because she was planning a parachute jump for the next day and wanted to look over the cockpit sill to examine the terrain. About ten minutes into the flight the plane unexpectedly went into a dive and then a spin. Coleman was thrown from the plane at 2,000 feet and died instantly when she hit the ground. William Wills was unable to regain control of the plane and it plummeted to the ground. Wills died upon impact and the plane exploded and burst into flames. Although the wreckage of the plane was badly burned, it was later discovered that a wrench used to service the engine had jammed the controls. Coleman was 34 years old.