The History of Tessville (Lincolnwood), Illinois.

The Potawatomi Indian tribe originally settled in this wooded area but vacated the land after the Indian Boundary Treaty of 1816. Rural development proceeded slowly on treacherous plank roads along present-day Milwaukee and Lincoln Avenues.

Johann Volrath Theodor Tess (1828-1915), for whom the village was originally named, and his family came from Belitz, Gustrow, Mecklenburg-Vorpommern, Germany in 1856, purchasing 30 acres of barren land in the area. Johann Tess is buried at Saint Peters United Church of Christ Cemetery in Skokie, Illinois.

The population slowly increased, and the first commercial establishment, the Halfway House Saloon, was established in 1873.

Prior to the assassination of President Abraham Lincoln, the Indian trail was known as Little Fort Road and it led to the town of Little Fort, now known as Waukegan, Illinois. Little Fort Road became a plank road and was turned into a toll road. In 1926 then Lincoln Avenue became part of U.S. Route 41 which stretches 2,000 miles between the Upper Peninsula in Michigan to Miami, Florida.

The sparse farming population grew after the establishment of a Chicago & North Western Railway station in nearby Niles Centre in 1891 (Americanized to Niles Center in 1910, then renamed to Skokie in 1940).
The completion of the North Shore Channel in 1909 made the easily flooded prairie land manageable. More saloons and taverns soon appeared along Crawford and Lincoln Avenues. Because only incorporated municipalities could grant liquor licenses, 359 residents incorporated in 1911 and named the village Tessville.

Tessville annexed land throughout the 1920s, finally stretching to Central Avenue on the west and Kedzie Avenue to the east (the land that Thillens Stadium (renamed "The Stadium at Devon and Kedzie") sat on at the east side of Kedzie at Devon Avenues, now in Chicago was originally in Tessville[1]). During Prohibition, Tessville became a haven for speakeasies and gambling facilities.


NOTE: Historically, many so-called speakeasies turned out to be urban myths; i.e. Elliott's Pine Log Restaurant in Skokie and the famous Stratosphere Club in the Jewelers Building, downtown Chicago. Legal alcohol was available during the prohibition years.

During Prohibition, Tessville became a haven for speakeasies and gambling facilities and was long reputed for drinking and gambling. In 1931, Henry A. Proesel, a grandson of George Proesel, one of the original American settlers, was elected and served as the longest-serving mayor.
Proesel worked with the federal government's Public Works Administration (PWA) originally called the Federal Emergency Administration of Public Works and hired the entire unemployed workforce of Tessville to plant 10,000 elm trees on the village streets.

Most importantly, the community passed a liquor license law in 1934 that limited the number of liquor licenses allowable within the city limits and became a model ordinance for other communities. Proesel finally changed Tessville's image when he renamed the village “Lincolnwood” in 1936.
Henry A. Proesel served as Mayor of Tessville/Lincolnwood for 46 years from 1931 to 1977. Today, Lincolnwood is a two-and-a-half square mile suburb of Chicago.

[1] McCormick Road was built in 1926 by the Chicago Sanitary District as an access road to its North Side Water Reclamation Plant at Howard and McCormick. 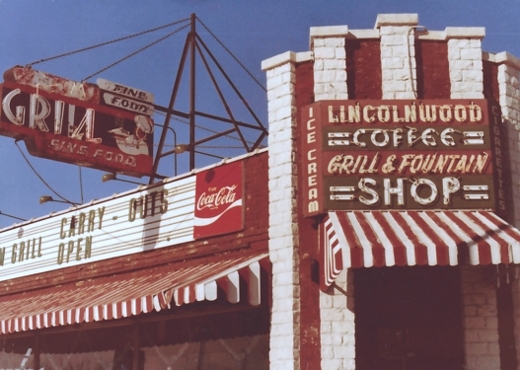 Email ThisBlogThis!Share to TwitterShare to FacebookShare to Pinterest
Living History of Illinois and Chicago® IL Northeast