The History of Thillens Stadium, a Little League Baseball Park in the West Rogers Park neighborhood of Chicago.

The "North Town Currency Stadium" at 6404 North Kedzie Avenue was founded in 1938 by Mel Thillens, Sr., owner of the Thillens Checashers business at 2351 West Devon Avenue, just east of Western Avenue. Thillens' idea was to have a baseball park that anyone could use, rent-free. It cost Thillens a total of $6 million to build the park to his satisfaction.

Thillens Stadium was north of the Lincolnwood diner and past the CTA bus terminus turn-around for the 155 bus route. Next came the parking lot for the Stadium was small, perhaps only 20 cars and another 20 cars along the eastern fence on Kedzie Avenue.
Tessville, Illinois, was renamed "The Village of Lincolnwood" in 1936. The border of Lincolnwood was moved from the west side of Kedzie Avenue to the west side of McCormick Boulevard after 1940.
In 1940 the ballpark erected lights for night use. In the 1940s, 1950s, and 1960s, both Little League games and men's 16-inch softball games were televised from the park by WGN-TV, with Jack Brickhouse announcing.

North of the 2nd baseball diamond was a large, free, gravel parking lot on the east side of the North Shore Canal.
During a Little League telecast in the 1950s, the centerfield camera, now a staple of all baseball telecasts, was first used. According to Brickhouse, "One of our cameramen, Chuck Seatsema, told me that the centerfield scoreboard was only a couple hundred feet away. He felt that if he put a camera out there, we'd get a nice shot of the little catcher giving signs and the little batter's face over the pitcher's shoulder."
"The Bases Are Loaded."
Thillens Stadium, Devon & Kedzie, Chicago, Illinois. 1953
[runtime: 00:27:09] 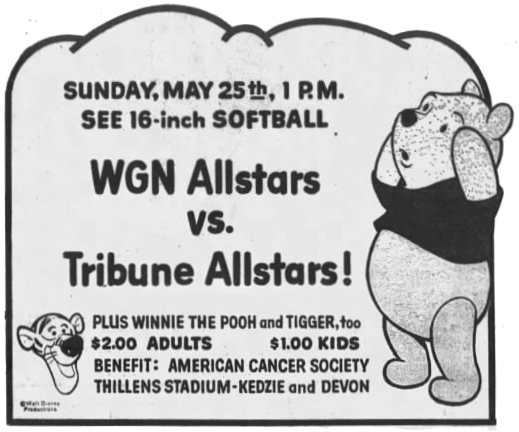 In 1969, I met and talked to Ray Rayner, who played a charity softball game against the Playboy Bunnies. After his game, he came up to the announcer's booth and sat down.

An area landmark was the giant baseball with the name Thillens on a large pole in the front of the ballpark. Initially, the ball spun on the pole. The Thillens baseball sign began as a globe spinning on top of the "Boys' World" clothing store at  2516 West Devon Avenue, at Maplewood, which used to be the Cine Theatre from 1937 to 1953. Mel Thillens bought the globe when Boys' World closed in the 1950s, and Mel had a parade moving the globe west on Devon Avenue to Kedzie Avenue.
The Thillens family took great pride in the spit-and-polish glamour associated with Thillens Stadium. The landscaping, cleaning and painting all contributed to the sense that you were in a shrine, spending $100,000 a season for expenses and over $100,000 yearly maintenance to keep the place up.

The centerfield scoreboard contained a 6-by-8-foot picture of the Thillens armored truck. Starting in 1974, if any player hit the truck on the sign, they would win a $5,000 savings bond. Only three talented little leaguers hit the armored truck at the top of the scoreboard, hitting a baseball 300 feet.
Amazingly, all three batters accomplished the feat on the same date; September 2. Al Pulikowski of Villa Park and Art Eggert of Elk Grove hit it in 1984, only 52 batters apart. Five years later, Patrick Patterson of Des Plaines became the third winner, hitting the truck on September 2, 1989. 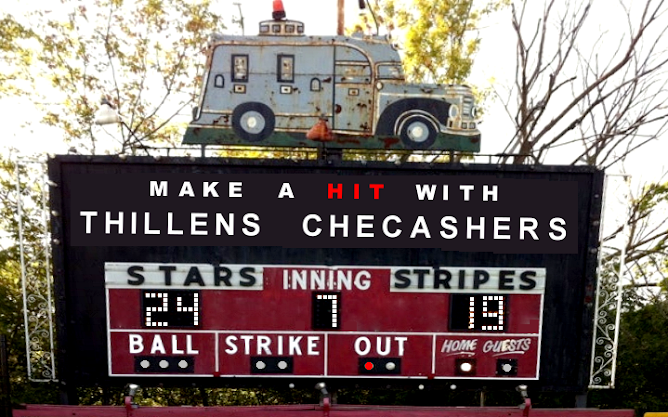 Mel Thillens, Sr. died on December 20, 1993, but his family continued to operate the field, and a non-profit charitable foundation supported it. Over time, the foundation could not afford expenses, and in March 2005, Thillens Stadium closed.
The city of Chicago and the Chicago Cubs combined to invest $1.5 million in repairs, and the Stadium reopened its doors in June 2006. The larger of the two diamonds, the one on the park's south side, was named "Cubs Field." The park has since been renamed "The Stadium at Devon and Kedzie."

In 2013, the Thillens family requested that their family name be removed from the field. Mel Thillens, Jr. was quoted as saying the field wasn't being maintained, and the Thillens family and business no longer wanted to be associated with it. The Chicago Park District claimed to have maintained Thillens to "continue as a place of historical significance" that "thousands of children enjoy" each year. They obliged Mr. Thillens' request, removing the name from the field. In June of 2013, the 60+-year-old giant baseball, estimated at 12 feet in diameter, was removed because it was deemed unsafe.
RAY RAYNER SPENT AN HOUR WITH ME AT THILLENS
I met Mel Thillens at his business office of the "Thillens Armored Car Check Cashing Company" on Devon Avenue, just east of Western Avenue. I just walked in and asked to speak with Mr. Thillens in the spring of 1968; I was 8 years old. Mel Thillins stepped out of his office to greet me and took me into his office.
I asked him if I could work at Thillens Stadium for the season. Mel asked me a few questions to find out about my interests. Mel gave me a day and time to meet him at the Stadium. He introduced me to the staff, telling them that I'd be helping them out.
I was allowed to attend any and all games I wanted to for free. When working, I was allowed to eat, drink, and snack for free. As a matter of fact, I don't remember there being any limit to food and drink. Sounds good, right?. Although I didn't get any money, I met some local celebrities, like Ray Rayner, Eddie Feigner and his team, the King and his Court, the Queen and her Court, the Donkey Baseball teams, etc.
I met Ray Rayner at Thillens Stadium in 1968. Rayner was on a WGN 16" softball team playing the Playboy Bunnies. The evening game was for a charity, and the game was standing-room only.
If you know anything about Thillens Stadium, one kid worked the manual scoreboard placing the number of runs per inning, and a total runs count. The Strikes, Balls, and Outs scoreboard lights were worked from an elevated platform, with the game announcer, from behind the home plate. I worked the strikes and outs from the announcer's booth.
Rayner sat up in the announcer's booth when the WGN vs.Playboy Bunnies game was over. We talked for quite some time. Ray told me he would talk about the charity softball game on his show on Monday. I jokingly mentioned that I had never heard my name called on the Romper Room Show. Rayner told me he would say my name on his TV show the next day and that I could count on him.
Sure enough... Ray talked about the charity softball game and how much money was raised, then he said he met a great kid who worked at Thillens Stadium, Neil Gale. I was floored. It's too bad there were no recording devices to capture that, but it's one of my life's "claim to fame" moments.
Mel Thillens had my name put up on the sign that same day. I freaked out when I saw it.
I'm Facebook friends with two of Mel's daughters, one of who is active in my Facebook Group, Living History of Illinois and Chicago® 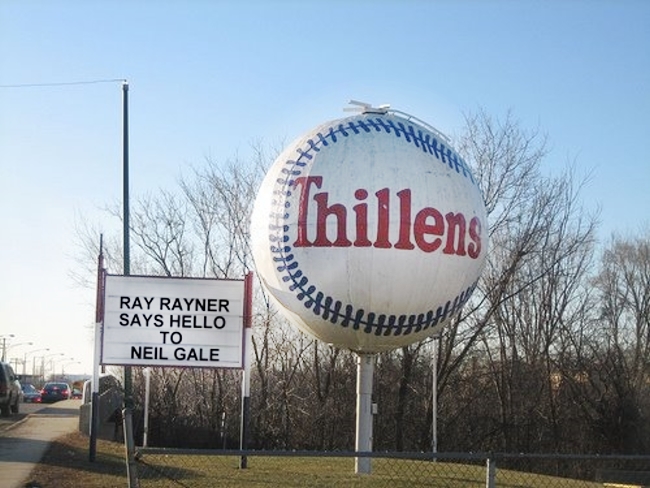 NOTE: In 1932, Mel Thillens owned and operated a currency exchange at 2351 West Devon Avenue in Chicago. His clientele consisted mostly of factory workers and government employees in the Works Progress Administration (WPA) program from 1935-1943. To eliminate customers from tracking mud over his new office carpet, he conceived the idea of bringing money to the worker to cash their paychecks. It was the first mobile armored car check cashing service in the U.S.