The History of the "Father Time" Clock, the Jewelers Building, and the Stratosphere Club in Chicago.

ABOUT THE JEWELERS BUILDING CLOCK
The "Father Time" Clock at 35 East Wacker Drive, in Chicago, is located at the Jeweler's Building which faces the Chicago River.

Weighing an estimated six tons, the clock was donated to the building by one of its first major tenants, the Elgin National Watch Company. 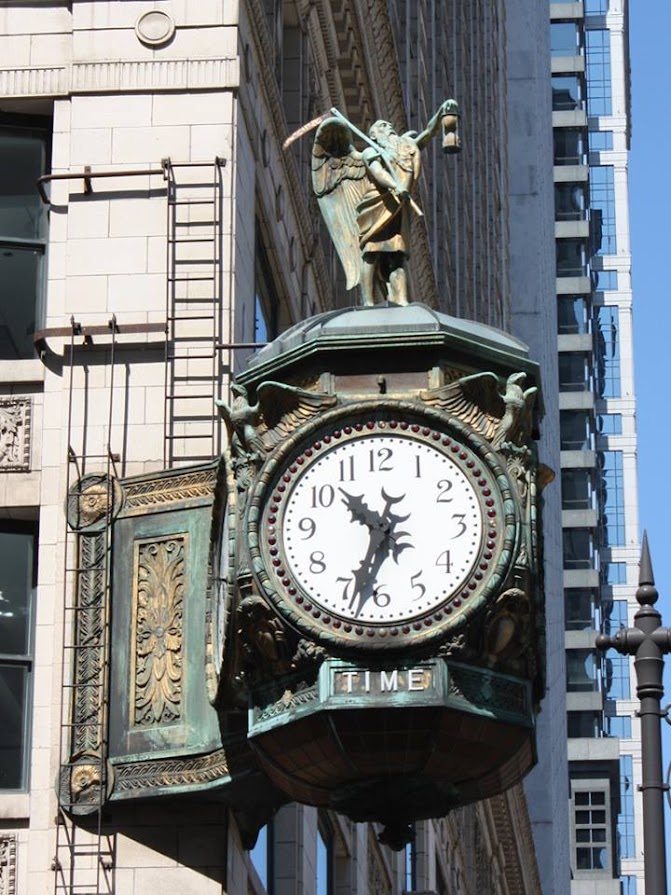 If you visit the northeast corner of the building, the clock at first glance looks like the Marshall Field's clocks. That is until you notice the creepy guy who looks like death. He is really supposed to be Father Time. 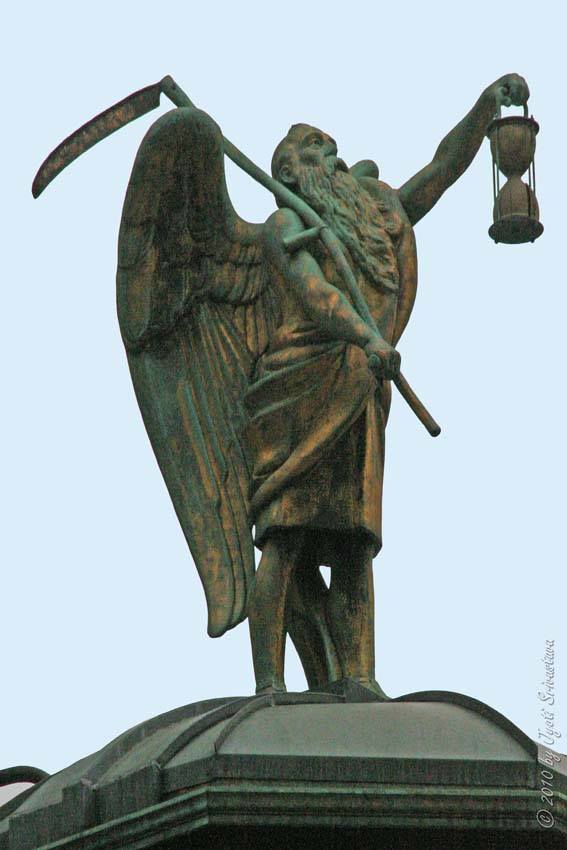 At night the clock is outlined in dark red lights, which makes it look even creepier. The clock was a gift from the Elgin Watch Company. Father Time was their logo. They had an office in the building. 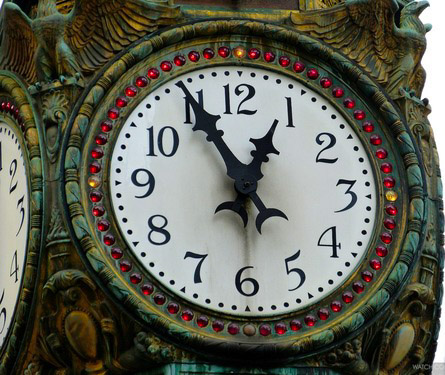 ABOUT THE JEWELERS BUILDING
Aside from the fact that it's a beautiful building with a fancy dome on top of it, it has a very cool history. Construction started in 1924 and was completed in 1927. The Jewelers’ Building was renamed the Pure Oil Building on October 1, 1926.

The lower floors were opened to their first tenants in May 1927, the upper stories opened in the summer, and the tower in October of 1926.

Since this was originally a jewelers building, it had many innovative security features. One of them was a really extreme version of a parking garage. Since jewelers would carry their merchandise around with them, they were often in danger of being robbed. So, to make sure no one was attacked on the walk between the car and the office, jeweler's just drove their car straight into the building! For its first 14 years, the building had a car lift that served the first 23 floors and facilitated safe transfers for jewelry merchants. The car elevator would bring you to the floor you worked on and then drop your car off on one of the parking levels. From the security office, a lock-down would commence upon any tenant's trigger of the alarm system. All outside doors would lock, and elevators would stop at the next floor, doors remaining closed and would not move.

The best part of this 40 story building is the dome at the top. 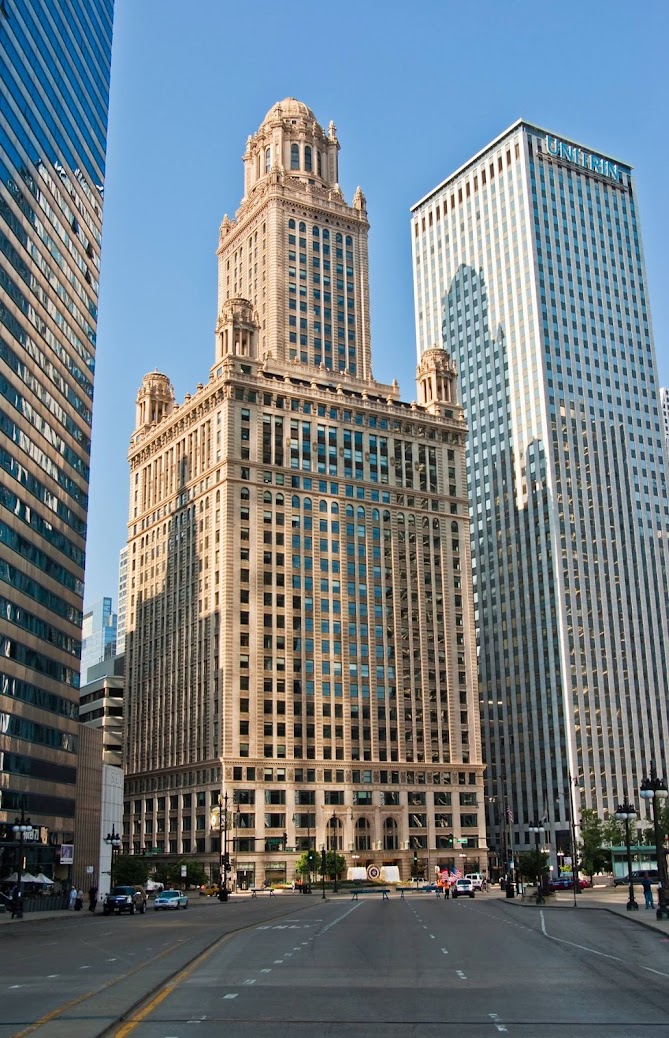 Formerly the Pure Oil Building, then the North American Life Insurance Building, 35 East Wacker was listed in 1978 as a contributing property to the Michigan–Wacker Historic District on the National Register of Historic Places and was designated a Chicago Landmark on February 9, 1994. 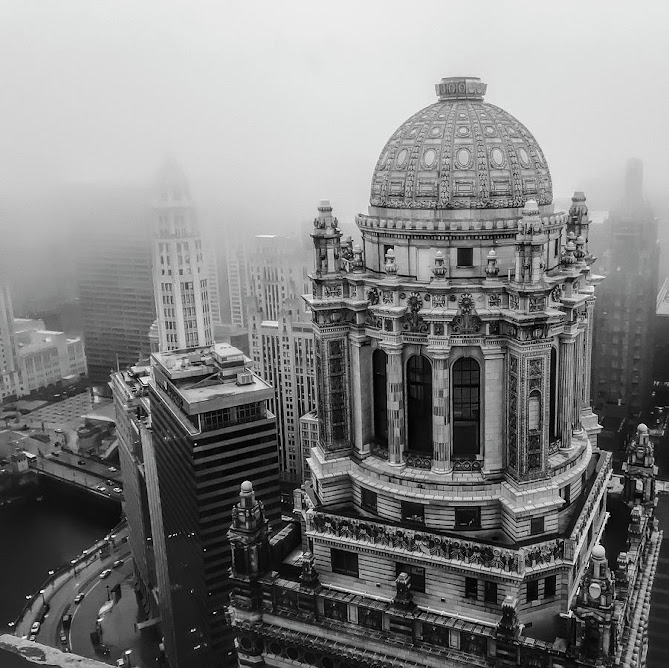 When the 40-story Jeweler’s Building was completed in 1927, the dome sat empty for some time. In 1930, the Chicago Tribune reported that a hawk had taken up residence in the dome and was preying on migratory birds in the loop. References seem to indicate that it was used for storage.
The Stratosphere Club in the dome was not, nor ever was a speakeasy, and Al Capone never stepped foot in the Stratosphere Club which opened in March of 1937. Al Capone was in Alcatraz Federal Prison since August 22, 1934, and prohibition ended on December 5, 1933.

The creation of the Stratosphere Club was announced in the Tribune. On January 10, 1937, a Tribune article entitled “City’s Highest Restaurant Being Built.” Owner Paul Streeter named the club after a closed club in the Rockefeller Center in New York City.

The Stratosphere was scheduled to open in March and was the top four floors – a kitchen on the 37th, a regular restaurant on the 38th and 39th, and a cocktail lounge on the 40th. An ornate birdcage elevator took guests to the 40th-floor. The lounge was decorated as a hot air balloon, accentuating the outstanding views of the Chicago River and the Loop.

The club was a big hit, but by 1954, the cupola was converted into a showroom for a commercial artist who kept and used the old circular bar of the Stratosphere Club. It was the private conference room and showroom for architect Helmut Jahn (1940-2021), with his offices in Suite 300 of the North American Life Insurance Building.
Jahn designed that awesome United Airlines Terminal 1 at Chicago’s O’Hare International Airport in the late 1980s with the moving walkways, ceiling light sculpture, and heavenly music.
Jahn was killed on his bicycle on May 8, 2021, in suburban Campton Hills. The collision happened near his home and horse farm in St. Charles, Illinois.

A photoalbum of Jahn's building. 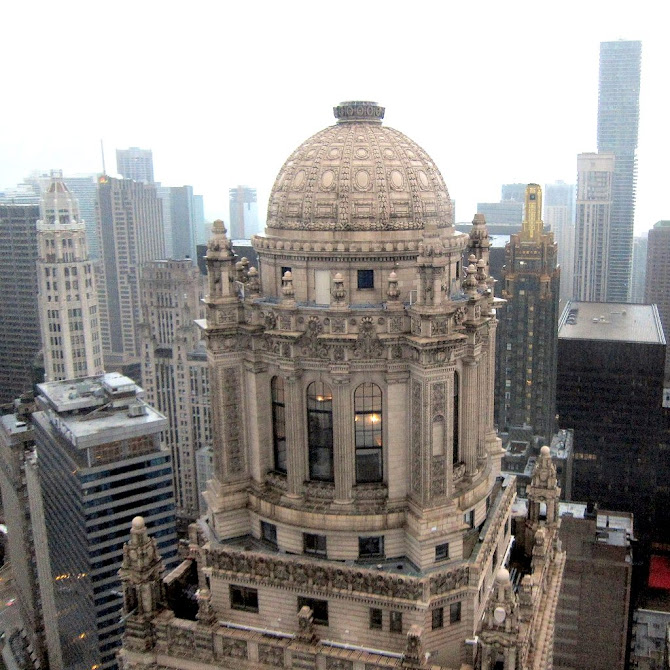 Movies love this building. It's the Gotham City Courthouse in "Batman Begins," and Batman sits on one of the turrets in one scene. In the movie "Transformers: Dark of the Moon" there's a giant robot battle on top of the building.


"I used to give [Chicago] tours on double-decker buses, river & lake tours. We [and I] used to tell the story of Al Capone and the Stratosphere Club [being a speakeasy] and we always believed it to be true. All those people that I lied to through the years."