Paul W. Cooper, a  concessionaire, and promoter for "Riverview Sharpshooter Park" (the "Sharpshooter Park" part was dropped in 1905) from Riverview's opening day on Sunday, July 3, 1904. He owned a water ride called "Shooting the Rapids," a Shoot-the-Chutes ride, but not at Riverview.
William M. Johnson, a lawyer, and project's funder was also a promoter for Riverview Park. Somehow, Johnson and Cooper gained control of Riverview from Wilhelm Schmidt. Schmidt owned the (pre-Riverview) park called Schuetzen Park then "Sharpshooters Park," from 1879 on. Of course, there was growing animosity between them until Schmidt finally regained control and forced Cooper and Johnson out.

Cooper had a successful amusement concession at Municipal Pier (now Navy Pier) in the 1920 & 1921 seasons. 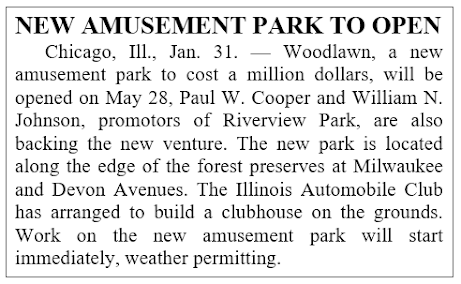 The new Woodlawn Amusement Park was dedicated on Tuesday, February 1, 1921. William M. Johnson turned the first spadeful of earth, and Mrs. Johnson christened the park by breaking a bottle of fine wine. Fifteen automobile loads of friends attended the ceremony. Afterward, there was a banquet at the Chicago Press Club with music supplied by Paul Cooper's Municipal Pier dance orchestra.
A few weeks later, William M. Johnson suffered what Billboard trade magazine called "a nervous breakdown." Plans for Woodlawn Amusement Park ground to a sudden halt, never to be built."


Chicago, Ill. — The Woodlawn Amusement Park Company, Paul W. Cooper, president, has abandoned the amusement park at Milwaukee and Devon Avenues for which Architect Ralph C. Harris made the plans.

Given this, Woodlawn was their attempt to become the big, new, Chicago Amusement Park. If it had been built it may well have outlived Riverview.

So why wasn't Woodlawn Amusement Park built? Here are my thoughts. In the late 1910s, the population in the city was starting to move outward in all directions as Chicago was experiencing a population explosion. Chicago's northwest side was a prime location because not much was out there. The area experienced a building boom and was perfect for a giant-sized amusement park.
After WWII, Riverview really began to feel the effects of their customer base moving away; and not come back but once or twice a season, if at all. Instead, these families found new kiddie amusement parks, which began popping up like dandelions, in the 1950s suburbs. These new parks had plenty of parking, picnic areas, rides for toddlers, and they took their Baby Boomer kids to these kiddie parks.

Woodlawn would have been closer to the new suburbanites. Also, with the area around Woodlawn still undeveloped in the 1920s and the Great Depression starting in 1929, they might have secured enough land for future expansion and been able to install 1960s and 70s theme park rides that Riverview didn't have the room for, like a miniature railroad, water rides, and 80s, 90s, and 2000s style steel and loop coasters, etc.

Woodlawn could have been a Chicago-style Kennywood Park, a Riverview-era amusement park in Pittsburgh, Pennsylvania; founded in 1898 and is still running.