Many Early Chicago Areas Were Called "The Cabbage Patch."

The term "The Patch" or "Cabbage Patch" was derived from Cabbage Farms.

A settler, Charles Lee (or Leigh), had come to the Chicago area about 1804 with his family and had preempted a large tract of land. Charles Lee owned a farm on the South Branch about four miles from its mouth; his house stood on the northwest side of the river in a grove and was first called "Lee's Place" and later "Hardscrabble." When immigrants arrived, they built the Illinois & Michigan Canal to link Lake Michigan and the Illinois River. Many came from Italy, Lithuania, Poland, and Ireland, hoping to recreate the tight-knit communities they had left behind. They settled in Hardscrabble, renamed Bridgeport, in 1836 after a low bridge crossing the Chicago River's South Branch. 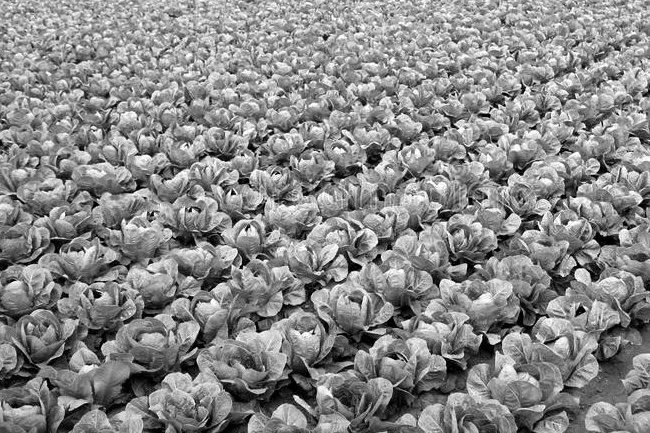 The Bridgeport area around 35th and Wells Streets was called the Cabbage Patch because people grew cabbages in their yards. After the canal was built, they worked in the Union Stock Yards and packing houses in the Back of the Yards neighborhood to the immediate south.
Chicago's first Swedish settlement emerged in 1846. They moved their community a few times until the 1870s, when a part of their settlement emerged in today's West Town neighborhood. Some Swedish families grew cabbage on small farms. The original nickname "Swede Town" became "Little Sicily," which was also known as "Little Hell." Smith Park, or "The Patch," was then settled primarily by Italian immigrants of various old country locations who moved west from the Little Sicily area on Sedgwick Street. Many families had lived in the neighborhood for over six generations. The Chicago Housing Authority (CHA) built the Frances Cabrini Homes, completed in 1942, which was the first major public housing project in Chicago and the first section of what would eventually be called the Cabrini-Green Project. The Cabrini Extension project was completed in 1958, followed by the nearby William Green Homes, another high-rise building that was opened in 1962.
In 1853, the Chicago Land Company, of which William B. Ogden was a trustee, purchased land at a bend in the Chicago River and began to cut a channel, formally known as North Branch Canal but also referred to as Ogden's Canal. The result was an island, the only island in Chicago. This river settlement along the North Branch became known as "Kilgubbin," or more often, as "The Patch." It quickly became a haven for Irish immigrants who were so poor they couldn’t afford proper housing. The island was dubbed Kilgubbin, after the area in Ireland where most of them were originally from. Taking a cue from the life they left behind in Europe, they built flimsy wooden homes with gardens and farms where they raised livestock and grew cabbage and vegetables. As the city grew around them, the island got a few factories, but other than that, it barely changed. Chicagoans came to see the residents as backward, treating them with a mixture of pity and mockery so they called Kilgubbin “Goose Island."
Old Town originated as a home and trade center for the Indian nations of the Potawatomi, Miami, and the Illiniwek. The area was founded in the 1850s by German settlers. Immigrants began to farm cabbage, potatoes, and celery, which is where Old Town inherited its nickname as “The Cabbage Patch.” Cabbage Patch fell out of style, and the area became “North Town” in the early 1900s.
On April 29, 1878, Rogers Park was incorporated as a village in Illinois. West Ridge was adjoined with neighboring Rogers Park at one time, but it seceded to become its own village in 1890 over a conflict concerning parks and the taxes to create and maintain them. Rogers Park and West Ridge were both annexed to Chicago on April 4, 1893, each becoming one of Chicago's 77 communities today.

As West Ridge and Rogers Park evolved from being independent villages to Chicago communities, residents carried animosity toward one another. Rogers Park was cosmopolitan compared to the decidedly rural West Ridge, which was mostly truck farms growing cabbage, vegetables, and flowers to be sold to wholesalers in Chicago.

Rogers Parkers prided themselves on the fact that they lived in a “dry” part of town where booze was outlawed. West Ridge, on the other hand, was home to several drinking establishments.

This cultural divide persisted as things came to a head on the political front in 1896-97. The two areas had proposed competing for plans to create and fund parks. Notably, there was no unified Chicago Park District at this time, and it was common for local communities to create separate park authorities, which would sometimes compete for tax dollars. During the campaign to decide which park plans would prevail, West Ridgers and Rogers Parkers exchanged harsh words and deployed brutal tactics in at least one case.

In 1895, Springfield approved a permit allowing the Lincoln Park Park District to create and administer the proposed North Shore Park District, which included all territory along the lakeshore from north of North Avenue to Northwestern University’s campus in Evanston. Rogers Parkers were, for the most part, in favor of such improvements. Things didn’t get gel, and in July 1895, Evanstonians voted to establish their own lakeshore park district. Rogers Parkers then formulated its own North Shore Park District version to occupy the lakeshore from Devon Avenue to the Evanston City Limits.

West Ridgers saw this plan as nothing less than a nefarious scheme to siphon off West Ridge tax dollars to improve the lakefront and Rogers Parkers’ properties. In retaliation, the West Ridgers sought and received a permit from the Cook County Court to create their own Ridge Avenue Park District encompassing the land west of the Chicago & North Western (C&NW) tracks. A referendum was slated for April 14, 1896, to decide whether West Ridge’s proposed Ridge Avenue Park District should be formed or whether Rogers Park’s proposal for the North Shore Park District should be formed. A bitter campaign followed. Accompanied by a brass band, Rogers Parkers paraded on the streets waving poles topped with cabbages and taunting the farmers of West Ridge with the chant, “Cabbageheads.” Come election time, the Cabbageheads prevailed, and in 1897, the first election of the Ridge Avenue Park Commission was held. Indian Boundary Park was created by this commission, among others.
Lilydale is a small neighborhood in the northwest corner of the Roseland community. In the 1920s and 1930s, the thinly populated area was referred to as the "cabbage patch." It consisted of mostly vacant land between 91st and 95th Streets and between State Street and the Chicago & Eastern Illinois Railroad tracks (then the Chicago and Western Indiana Railroad).
Polk Street and Western Avenue area was also called the "Patch."

NOTE: St. Ignatius Parish, 6559 N Glenwood Avenue, in the Rogers Park community of Chicago, was nicknamed "the Patch." I've been told by many people that when they attended school at St. Ignatius, the parish was nicknamed "the Patch" because the students were sprouting up like cabbages. There was no cabbage farm around Albany and Glenwood Avenues.

If you know of other Chicago areas that were known as the Patch or the Cabbage Patch, please comment with the location and information below.