The History of Indian Boundary Park in Chicago, Illinois.

Indian Boundary Park at 2500 West Lunt Avenue in Chicago is a 13-acre urban park in the West Ridge community of Chicago that opened in 1915.
Indian Boundary Park is named for the territorial boundary established by the Treaty of St. Louis in 1816 between the Chippewa, Ottawa, and Potawatomi tribes and the United States government.

After the U.S. Government bought the land as far west as the Mississippi River from Emperor Napoleon of France in the Louisiana Purchase of 1803, they still had to work out treaties with the Indian tribes who recognized neither the American or French claims to their territory.

The Indian tribes ceded land in a 20-mile-wide corridor all the way to the Mississippi River in the treaty of St. Louis in 1816. The rest of the land outside the boundaries (both north and south) was still owned by Indian tribes until the Chicago Treaty of 1833. 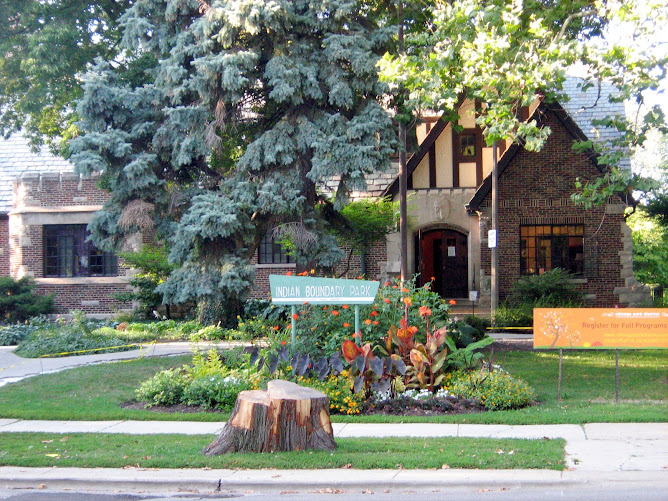 The 1816 Treaty of St. Louis - Like many diagonal streets that interrupt the grid patterned streets of Chicago, Rogers Avenue comes from a past far earlier than the surveyors who laid out Chicago’s streets. An ancient Indian trail, the passageway we now know as Rogers Avenue holds a special historic significance.

On August 24, 1816, the Treaty of St. Louis designated this particular trail to be a boundary dividing the land between the Indians and white settlers. Signed on behalf of the United States by Illinois’ first Governor, Ninian Edwards (1775-1833); Auguste Chouteau (1749-1829), and William Clark (1770-1838), of the Lewis and Clark Expedition, and brother of the Revolutionary War hero Gen. George Rogers Clark, after whom Clark Street is named), the treaty was negotiated with the Council of Three Fires, the united tribes of Ojibwa, Ottawa, and Potawatomi. White settlers were permitted to settle south and east of the boundary line.

The line ran southwesterly to what is now Ottawa, Illinois. The boundary existed until the Treaty of Chicago in 1833, when Indian tribes were driven out of the area.

This treaty line exists now as Rogers Avenue, which runs from Eastlake Terrace to Ridge Boulevard, and then starts and stops a few times in the Chicago neighborhoods of Sauganash and Forest Glen. The same trail picks up again briefly as Forest Preserve Drive, just west of Narragansett Avenue and continues the path to Belmont Avenue between Highway 171 and River Road. Rogers Avenue is named in honor of the same man after whom the community of Rogers Park is named, Philip Rogers.

Although the boundary now exists in history, it has lent its name to a very familiar landmark in our community, Indian Boundary Park, which lies directly in the path of the trail. Further down the trail, at the end of Forest Preserve Drive, the history of the trail is further memorialized by the aptly named “Indian Boundary Golf Course.”

An historic plaque was installed at Clark Street and Rogers Avenue on the Northeast corner. Presently it is partially hidden by the housing of the traffic light controller for this busy intersection.

About Indian Boundary Park
The Park was created in 1915 by the Ridge Avenue Park District (RAPD) for a $3000 per acre purchase price. The Ridge Avenue Park District was the first of 19 neighborhood commissions established in 1896 to serve areas recently annexed by the City of Chicago.
The Park was the 2nd and largest of four passive parks created for middle and upper-class residents who were purchasing some of the "finest apartment buildings in Chicago (then under construction), besides the houses and (Chicago style) bungalows" per the Chicago Evening Post on July 11, 1925. Whereas other Chicago parks were created for healthy outdoor activities for "the poor and immigrant communities," the passive parks were created for strolling through gardens and quiet activities such as bird-watching.
The park landscape architect was Richard F. Gloede of Evanston, Illinois, the creator of many North Shore estate landscapes. Two stone columns (still in place) on Lunt Avenue marked the entrance to a large, oval perennial garden designed by Mr. Gloede with many shrubs and meandering paths. One can imagine people in the 1920s strolling or sitting in the Park with friends on a Sunday afternoon visit.
The Park was unique in that it had no straight lines crisscrossing it like most other city parks. The Park's eastern and northern lawns flow seamlessly into the front yards of the Park Gables, Park Castle, Park Manor, and Park Crest co-op apartment buildings. The original plan also included the lagoon and spray pool, still important features of the Park.

Indian Boundary Park was added to the National Register of Historic Places in 1995.

VISIT OUR INDIAN BOUNDARY PARK SOUVENIR SHOP
The Indian Boundary Park Zoo
In the mid-1920s, the Ridge Avenue Park District opened a small zoo in Indian Boundary Park at 2555 West Estes Avenue with the donation of a black bear given by the district president, Frank Kellogg. Although many parks had their own zoos then, the animals were eventually transferred to Lincoln Park Zoo. 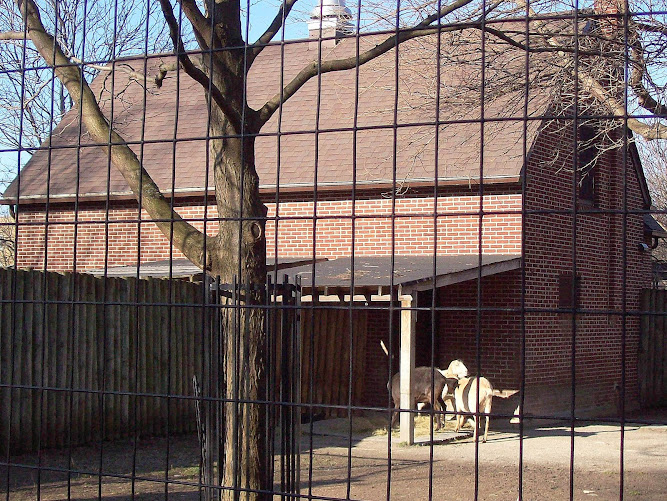 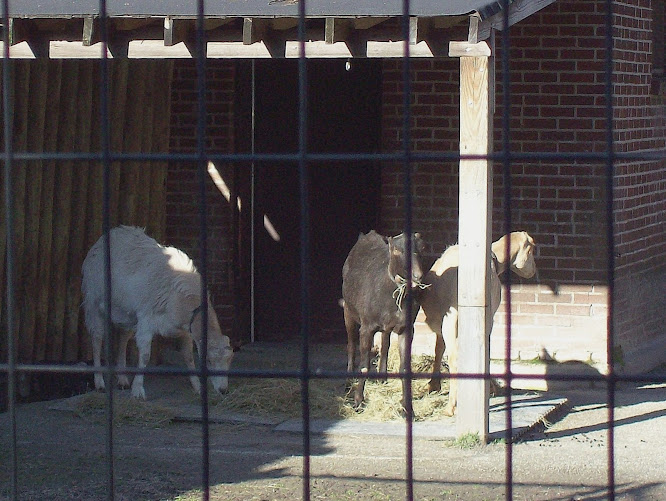 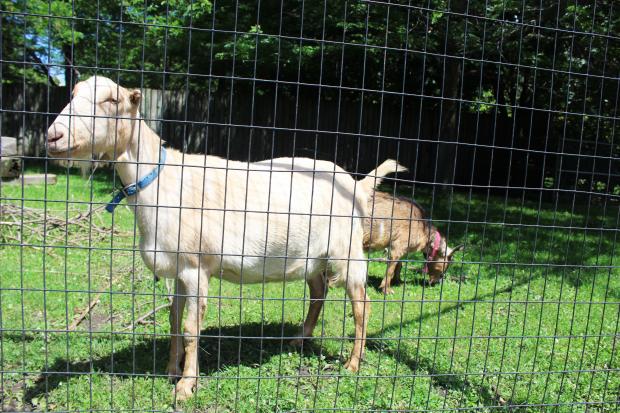 In the early 1980s, the community successfully lobbied to prevent the zoo from closing. The Chicago Park District spent $300,000 on repairs and new animal habitats, and work was completed in 1984. In 2013, the zoo at Indian Boundary Park finally closed. The remaining animals - a goat and some chickens - were moved to the Lincoln Park Zoo. 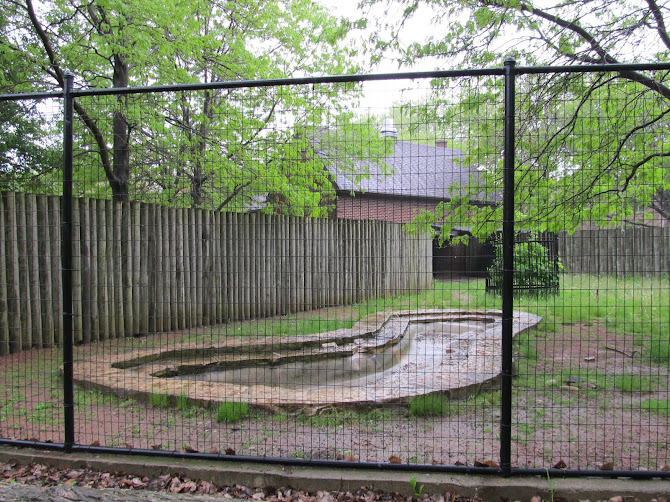 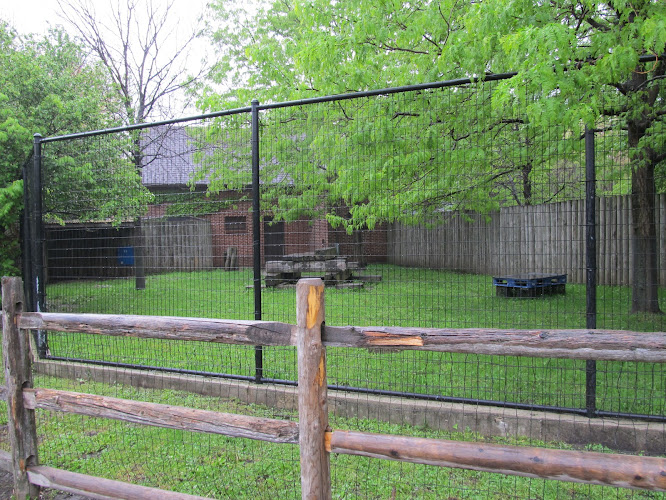 The former zoo has been transformed into an interactive play area with elements that encourage physical and imaginative play for children of all ages.
The Indian Boundary Park Lagoon
The Park's lagoon, designed by Richard Gloede, is a 1.04-acre multi-habitat natural area with prairie plants at its north end; the Park's west end is the former site of a small prairie planting. The lagoon contains wetland vegetation, while grassland plants dominate the island in the middle of the lagoon. 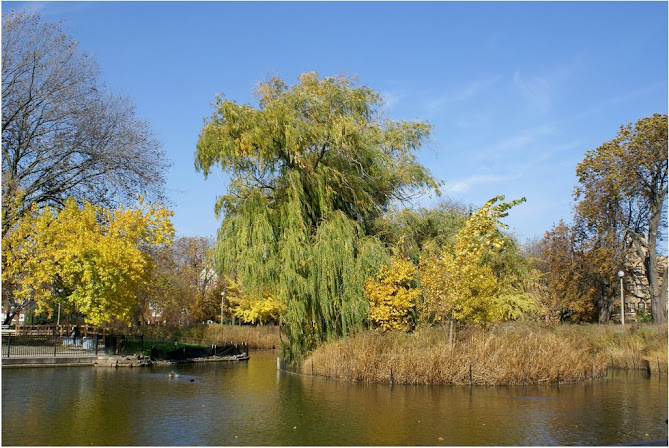 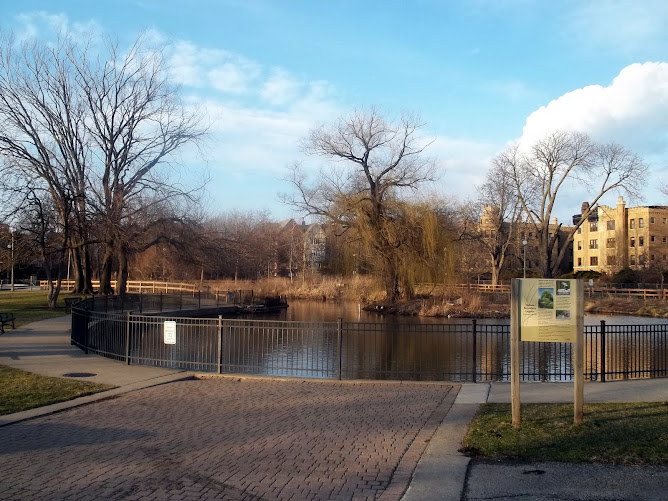 In 2001, the lagoon and the prairie areas underwent a restoration, while the island saw the planting of Bur oaks. Periodic controlled burns are used to maintain plants on the island and in the prairie.


Flying around the Lagoon at Indian Boundary Park - 2016

Indian Boundary Park Bird Sanctuary - 2010
The Fieldhouse
The Fieldhouse incorporates Indian interior elements and is a Tudor revival "Arts and Crafts" style structure. It was designed by Clarence Hatzfeld, responsible for many of the Chicago Park District's distinctive public buildings, including the nearby Green Briar Park & Chippewa Parks. Built in 1929, the structure serves as one of the twelve Cultural Centers of the Chicago Park District. It offers classes for all ages in theater, dance, visual arts, music, and performances presented to the public.

The interior design motifs acknowledge the Indians who lived here before being driven to the west. The motifs include an Indian Chief keystone carved in relief over the entryway, chandeliers in the Banquet Room/Auditorium featuring parchment as drums with bows and arrows, and Indian Head carvings on the walls.

The centerpiece of the Fieldhouse is the multi-use Auditorium with the original 1929 lighting fixtures and sprung maple dance floor. 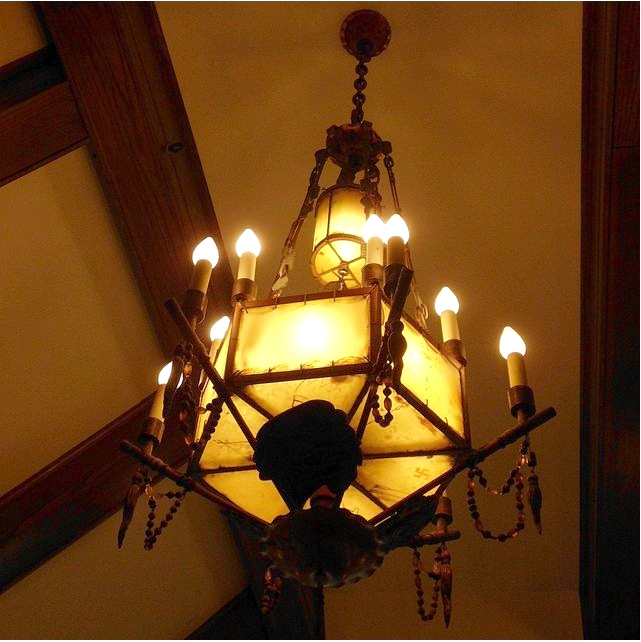 This room is a theater rehearsal and performance space, dance studio, lecture hall, and music performance venue. Some music classes were conducted in the Auditorium on the newly restored 1929 Mason Hamlin grand piano.

The Basement is another multi-use space but is primarily the province of the theater program. It multi-tasks as an ample rehearsal space, black box theater, and gathering space for teen programs.

The Ground floor Board Room and Solarium are where some visual arts classes occur because of the excellent natural lighting. In addition, smaller meetings take place there. The room is equipped with a piano for some of the music programs, and the ground floor front office, also equipped with a piano, is used for music instruction in a more private, one-on-one setting.

The Second floor has been devoted to the rapidly expanding stained glass and ceramics programs, complete with kilns for ceramics and glass fusing. In addition, the studio is set up with student workstations, each with easy access to storage and equipment.

In 2005 Indian Boundary Park fieldhouse was designated a Historical Landmark by the City of Chicago and listed in the National Register of Historic Places.
The Robert Leathers Playground
The large playground was built by the community in 1989. Funds were raised over 3 years, and 1500 neighborhood volunteers constructed the playground in 5 days. 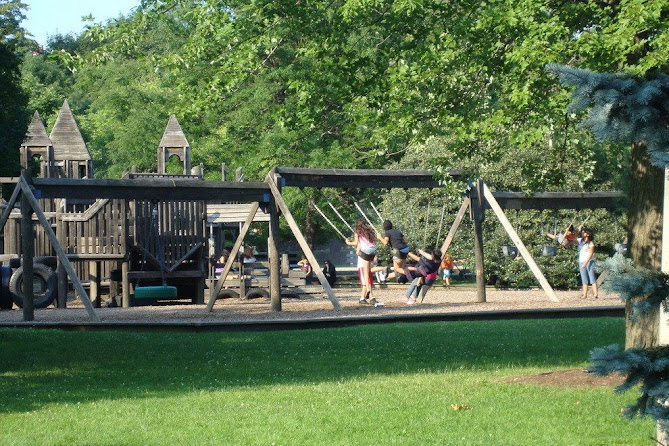 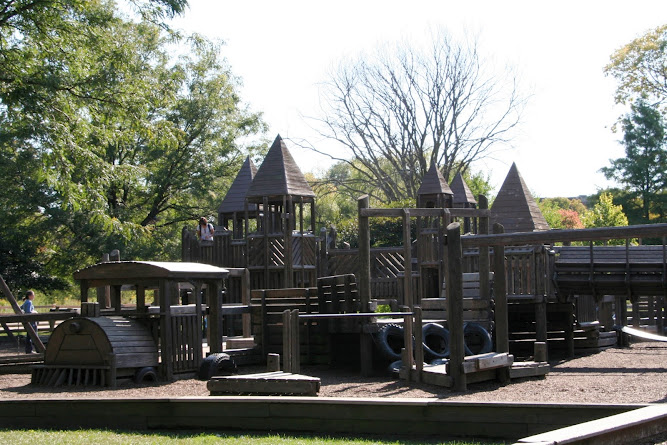 The Fieldhouse Catches Fire
An extra-alarm blaze severely damaged the Park's landmark fieldhouse on May 20, 2012. A partial roof collapse sent three firefighters to the hospital, two firefighters were treated for heat-related injuries, and the third firefighter was slightly injured. All three were checked out and then released from the hospital. 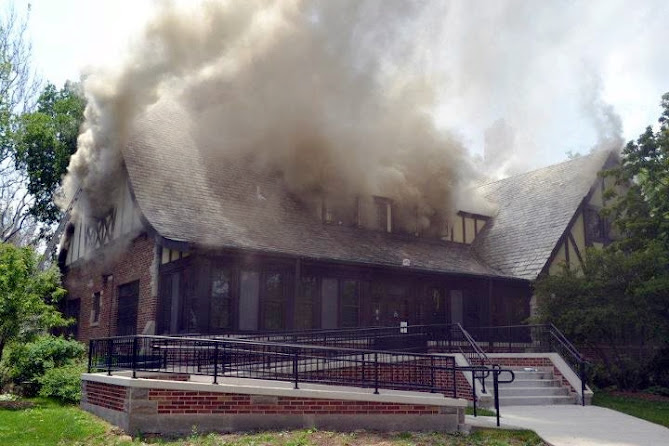 According to the Chicago Fire Department, the fire broke out around noon. Firefighters arrived quickly on the scene after the park supervisor called 911. The fire was caused by an electrical problem in the upper level of the Fieldhouse. Windows were shattered, and interior beams appeared to have crumbled inside the Fieldhouse. 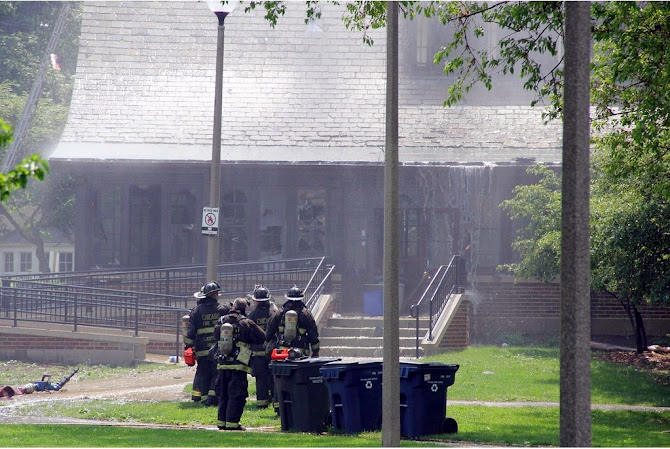 Witnesses say there were at least eight fire engines on the scene. About 15 firefighters enter the building at one point through the thick smoke. 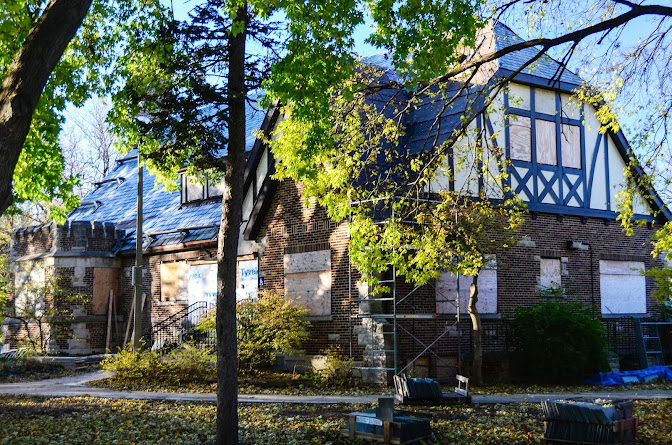 Indian Boundary Fieldhouse Fire - May 20, 2012
The Fieldhouse was closed to the public.