The History of the "Original" Blackhawk Restaurant on Wabash Avenue in Chicago's Loop.

The Blackhawk restaurant satisfied diners' sophisticated palates and music lovers from the moment Otto Roth opened the doors in the shadow of the 'L'  at 139 North Wabash Avenue on December 27, 1920, the same year that Prohibition began in January until his son Don Roth closed it in 1984, a memorable 64-year run.
The Blackhawk, a legend to several generations of Chicagoans, was named for the 86th Infantry Division called Blackhawk in World War I to honor Chief Black Hawk, who assisted the U.S. Army in Illinois and Wisconsin during the early nineteenth century.
Father and son were savvy innovators, tapping into diners' desires and setting trends before the word "trendsetter" became part of America's vernacular.

The main floor 600-seat dining room had magnificent murals, rich wood panels, and crystal chandeliers. An extensive continental menu was served by impeccable waiters to patrons seated at tables gleaming with white tablecloths, cloth napkins, and crystal, silver, with crested china. Classical musicians played from the balcony as diners ate below.
With Prohibition in place, Otto searched for a way to attract more customers. In September  1926, he abandoned the classical music format. He had a stage and a large dance floor installed. Otto booked the young dance band Carlton Coon-Joe Sanders and their Kansas City Nighthawks to play for two seasons. Success extended the orchestra's booking into the next five years at The Blackhawk.
The men's grill downstairs was a rathskeller (restaurant in a basement), symbolic of a diner, where lower-priced lunches and dinners were served quickly at both tables and counters. Once seated, a menu section offered some 30-minute lunch choices.
sidebar

According to John Drury, author of "Dining in Chicago" (1931): "If you like to dance between the soup and the entree (which connoisseurs claim is bad practice), we recommend the Blackhawk, at the east end of the bright light area (139 North Wabash Avenue); across the street from Marshall Field & Co. department store. Here is a luxurious dining room where the food and the music are both of high order and where you may see happy and not so happy couples and have an all-around good time. Coon-Sanders orchestra will tickle your toes if nothing else will. Dancing is from 6:30 PM to 1:30 AM, and there is no cover charge at any time. They serve a $1.50 table d'hote  (fixed price)  dinner that meets with the approval of Blackhawk patrons."

Many orchestra leaders and musicians found fame at The Blackhawk, like Bob Crosby and his Bob Cats, Jack Teagarden, Les Brown and others.
Later, when radio became popular in the 1930s, Otto Roth sponsored broadcasts directly from The Blackhawk, making it known for its entertainment.  "Live! From the Blackhawk!" became so popular that entertainers like Louis Prima, Glenn Miller, Perry Como, Kay Kyser, Chico Marx, Ozzie Nelson, Doris Day, Ted Weems, and in 1929, a 4-year-old Mel Tormé entertained dinners and dancers alike.

Melvin Howard Torme was born in Chicago, Illinois, to immigrant Russian Jewish parents, whose surname had been Torma." However, the name was changed at Ellis Island to "Torme." A Child prodigy, he first sang professionally at age 4 with the Coon-Sanders Original Nighthawk Orchestra, singing "You're Driving Me Crazy" at Chicago's Blackhawk restaurant.

The radio show became so famous that Western Union put a telegraph machine on the bandstand to receive song requests from the states east of the Rocky Mountains.
The Blackhawk survived the Great Depression and Prohibition, both ended in 1933, because of their entertainment choices and food quality.
In 1938, Don Roth took over the restaurant's operation after his father had a heart attack. At that time, Don Roth hired managers to operate the restaurant while he served in the Marine Corps. He returned to The Blackhawk as owner-manager in 1945, one year after his father's death.
As the big band era ended by 1950, Don Roth shifted The Blackhawk's focus from entertainment to food. Catering to business executives, the restaurant food focused on serving large portions of meat, such as prime rib with potatoes and salads.
In 1952, The Blackhawk was known as the venue "where food is the show," and Don Roth introduced his signature 21-ingredient Spinning-Bowl Salad, prepared and served tableside with flare from a rolling cart.
sidebar

Otto Roth had become one of the first restaurateurs to mix dinner and dancing. Otto was a savvy promoter, attracting female shoppers for a "dainty lunch," executives dining with clients, and sweltering Chicagoans to enjoy "cooled air." 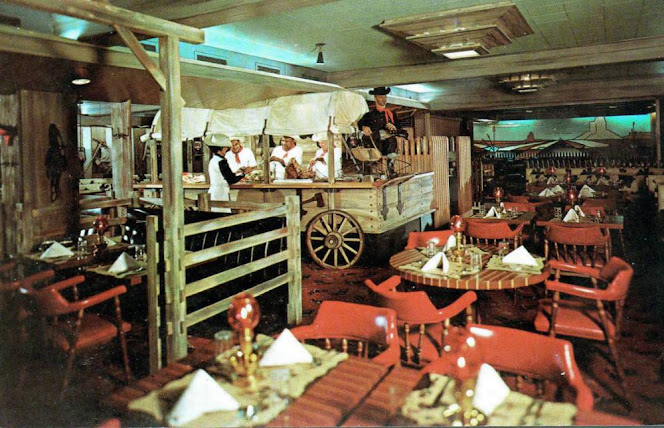 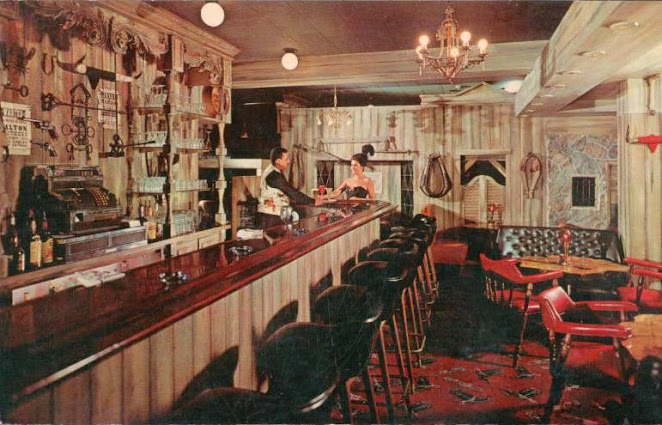 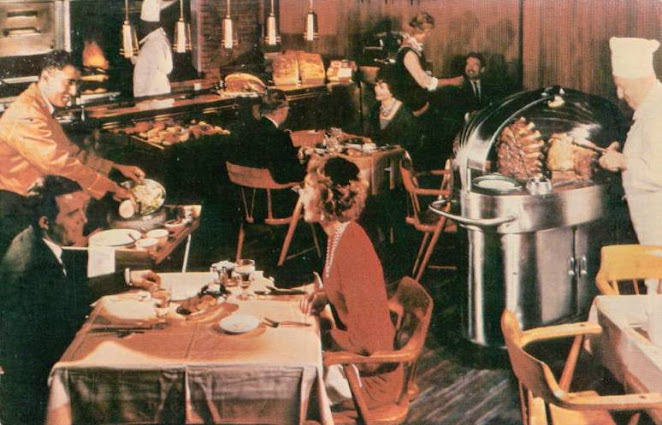 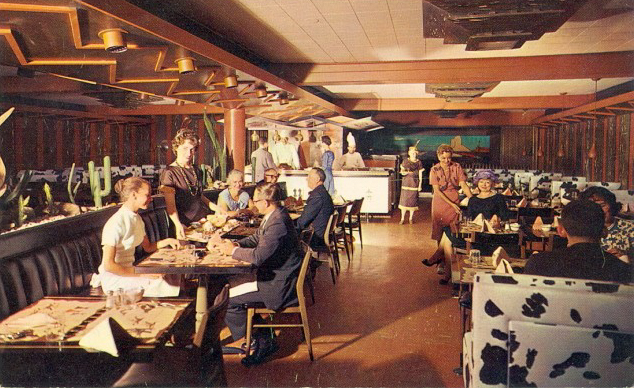 Don Roth, a University of Illinois at Urbana-Champaign grad fresh from serving as a lieutenant in the Marine Corps during World War II, took over the restaurant after his father's sudden death in 1944.
"We were a hearty restaurant," said Don, "But we knew that we had to replace the big bands with something revolutionary if we were to survive." During Don's reign, he did away with the stage and live music, preferring to "Made Food the Show."

Don's tableside theatrics featured prime rib and roast beef, served from food carts rolled through the dining room. His signature Spinning-Bowl Salad was set on ice and surrounded by all the ingredients, including their secret "spinning-bowl" dressing, which he later bottled and sold via local grocery stores. His signatures of the restaurant included a 15-shrimp cocktail and Boston scrod.

The restaurant was also the first to have art exhibits in the 1940s, a salad bar, and one of the first restaurants to have black and white waiters working alongside each other, claims Ann Roth, Don's wife.

"He was a very imaginative person and was extremely creative. My husband, Don, loved the business and was very charismatic," said Ann.

The restaurant, a legend to several generations, was named for the U.S. Army's Blackhawk infantry division, which in turn was named for Chief Black Hawk.
sidebar

A stink bomb was tossed into the restaurant on opening night, which cleared the restaurant until "a lake breeze supplied a new atmosphere," according to news reports, sending guests back into The Blackhawk to continue celebrating.

On January 10, 1952, when a statewide horse-meat scandal erupted, civic authorities closed the Blackhawk Restaurant.[1] Roth challenged the charges in court, where a jury found the restaurant not guilty. Upon reopening, business exploded.
sidebar

A comment by Ms. M.C. :
While in college I worked lunch in the more informal downstairs [dining] room (where lots of students worked). Don Roth was a very good boss and a smart man. An anti-Semitic diner came in about once a week and said bad things to me about Jews. I told him [Don Roth], and he said to show him the man the next time he comes in. So when he came in next, I pointed him out to Mr. Roth, who immediately walked over and told the man to leave the table and not return to the restaurant. I was so proud of Mr. Roth and relieved. He was a good businessman, a socially savvy person, and a good listener.

Don Roth opened several other restaurants on Michigan Avenue, Pearson Street, and Wabash Avenue north of the Chicago River, but they were all short-lived. 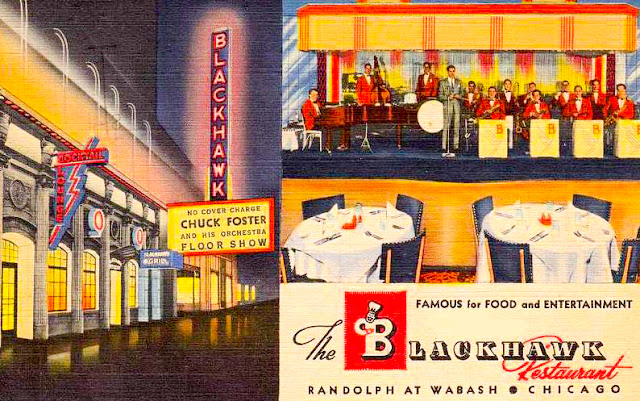 "Don Roth's Blackhawk" at 61 North Milwaukee Avenue, Wheeling, Illinois, opened in 1969 and ran 40 years before closing in 2009. Much of the original Blackhawk Restaurant's memorabilia became part of the Wheeling location.
Don Roth's Blackhawk in Wheeling closed on December 31, 2009.

Don Roth, one of Taste of Chicago's creators, was also involved in national and local restaurant organizations, often serving in leadership roles. Don Roth died on November 21, 2003.
INDEX TO MY ILLINOIS AND CHICAGO FOOD & RESTAURANT ARTICLES.

[1] THE 1952 STATEWIDE HORSE MEAT SCANDAL
As 1951 turned into 1952, many Chicagoans noticed that their meat tasted different. And now, the reason was evident a couple of weeks into the new year. They'd been eating horse meat, and Federal officials had been looking into meat sales around Chicago. Today the papers reported that another state meat inspector had been fired for refusing to cooperate with the feds. That made seven.
The investigation started with a packing plant in Lake Zurich. The feds claimed the "pure beef" shipped from there was 40% horse. The plant had processed more than 10,000 pounds of meat a week, and most of it wound up in Chicago.
Simple economics was the reason in 1952, beef sold for 59¢ a pound. A pound of horse meat went for 14¢. The feds had shut down the Lake Zurich plant, but other area packers were still under suspicion. And the Chicago mob seemed to be behind everything.
State meat inspectors had been bribed to look the other way, and any retailers complaining about getting strange meat were warned to keep their mouths shut. As a result, Chicagoans had consumed up to 4.5 million pounds of horse meat in the past two years.
News of the scandal had an immediate impact. Hamburger sales in Chicago dropped 50%, and fruits and vegetables were suddenly in demand. Meanwhile, city food inspectors became hyper-vigilant. The world-famous Blackhawk Restaurant was found to serve horse meat and had its license pulled. There was also political fallout. Governor Adlai Stevenson, a Democrat, was running for re-election, and the parade of disgraced meat inspectors didn't credit his administration. Though the governor wasn't involved in the scandal, the Republicans were now making jokes about "Adlai-burgers."
The horse meat probe led to several indictments. In the end, only a few people did any prison time. The Blackhawk reopened, and Adlai Stevenson became his party's nominee for President of the United States. He lost that election, but horse meat was not a factor.
Presented by Dr. Neil Gale, Ph.D. at 5/27/2020 08:00:00 PM