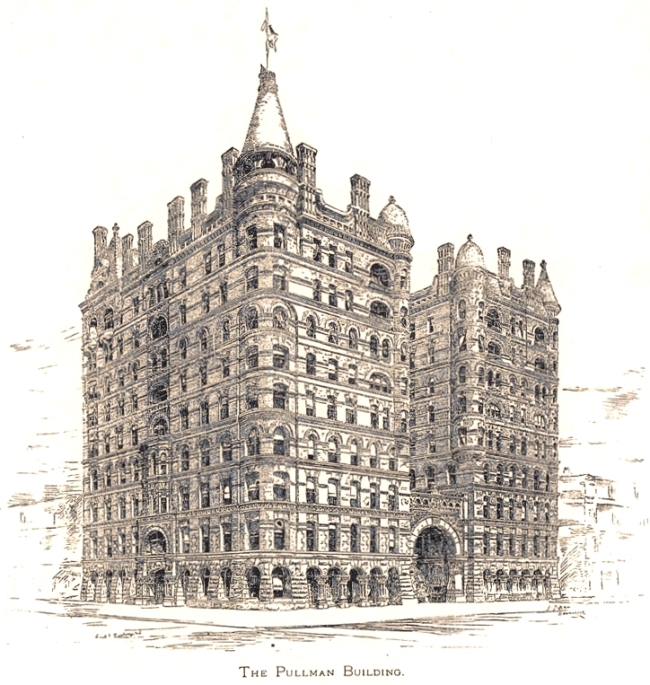 As the massively solid Pullman Building at 79 East Adams Street was under construction on Michigan Avenue in 1884, Adolph Hieronymus traveled to Chicago from his native Germany. Within a few years, he would run a renowned restaurant on the building’s top floor.

The Pullman Palace Car Company (established in 1862) was first located in the Tremont House at 92 Lake Street in February of 1867. The firm moved in 1868 to offices at Randolph and the lake, a fortuitous move. Not only was the building close to the rail lines running along the lakefront, but a rail siding ran next to the building.

The day after the Great Chicago Fire, Pullman quickly moved what he could save to stables at 18th Street, where business presumably carried on via the Illinois Central tracks. Between 1871 and 1884, Pullman's primary offices were located on the east side of Michigan Avenue south of 18th Street and later in the old Peoples Gas building at 122 South Michigan Avenue, the site which is still the site of the Peoples Gas building.

A new fire-proof building was built as the new headquarters of the Pullman Palace Car Company. It was completed in 1885 at the southwest corner of Michigan Avenue and Adams Street.

When owner George Pullman died in 1897, Robert Todd Lincoln, Abraham's son, filled in as the acting president. His role transformed into a permanent one in 1901. He resigned in 1911, citing health concerns. Lincoln remained involved as the chairman of the board, a position he held until 1922.

The Pullman Company was renamed on December 30, 1899, several years after the death of George Mortimore Pullman (1831-1897), and the headquarters remained in the Pullman Building until 1948, after which offices were moved to the Merchandise Mart.

When the imposing building was completed, the company occupied two and a one-half of its nine floors. At the same time, the rest of the space was rented for 125 offices and 75 apartments, which were known as “bachelor apartments,” probably because it lacked anything but the most rudimentary cooking facilities.
The Pullman company ran its own restaurant, "The Albion, " for the first few years," on the 9th floor. It was considered advanced, at the time, to locate restaurants on top floors so that cooking odors would not drift throughout the building. In addition, diners at The Albion, and later the Tip Top Inn restaurant, had excellent views of Lake Michigan.
During the World's Columbian Exposition in 1893, Adolph Hieronymus left his job as the chef at the Palmer House. He took over the Pullman building restaurant, renaming it to the Tip Top Inn. Under his management, it became one of Chicago’s best gourmet restaurants, hosting society figures and professional organizations. Until the Pullman company expanded its offices onto all eight floors below the restaurant, the men living in the 75 apartments on the upper floors were also steady customers of the Inn, often having meals sent down to them.

The space occupied by the Tip Top Inn was divided into a bewildering number of rooms, at least five and maybe more at once. Each had its own decorating scheme. Over the years – but surely not simultaneously — there were the Colonial Room, the Nursery, the Whist Room, the Charles Dickens Corner, the Flemish Room, the French Room, the Italian Room, the Garden Room, and the Grill Room. The Whist Room was decorated with enlarged playing cards and lanterns with spades, hearts, diamonds, and clubs. The lantern and suits also decorated the Inn’s china and menus.
Mr. Hieronymus employs negro waiters, and many people wonder how he gives such good service with negroes. In reply to this subject, Hieronymus said:

“I have tried to be a friend of the negro in this business. and have always employed them. It is in the Palmer House and The Tip Top Inn that the negro has held his position all these years in Chicago. I have their work systematized. Each waiter knows his station and what he has to do, arid each station has its captain, who is my representative, and I am always accessible. There is discipline, but no bad language. Every employee must be self-respecting and a credit to the establishment. The waiters appreciate the treatment and are loyal. It is the same way with the cooks; they are loyal, and have time and again given evidence of it. The policy here is to minimize waste. The high cost of living today is due in a large measure to waste, not alone in material, but in time."

Hieronymus was employee-centric and compensated his entire staff better than other local fine dining restaurants. The meals were expensive for the time period, and the waiters made an excellent living on tips.

A single tenant who had a meal sent down to his apartment might order; Tomato Crab Cumbo soup, Allice Salad, Fillet of Sea Bass, Peach a la Bellevue, and French Drip Coffee paid $2.95  in 1920 ($40.25 today).
Perhaps to attract new customers, Hieronymus created an associated restaurant on the 9th floor called "The Black Cat Inn," with somewhat lower prices than the Tip Top Inn and a menu featuring prix fixe meals (fixed price).

The Tip Top Inn and The Black Cat Inn occupy the entire top floor of the Pullman Building. The Black Cat Restaurant takes the west wing of the building and is operated with less overhead for service than The Tip Top Inn; consequently, the bill-of-fare prices are lower.

There was a new departure in service in the Black Cat Inn in that negro waitresses were employed. These young women had been carefully trained, serving a sort of apprenticeship as bus girls for some months before advanced to waiters. They are intelligent, respectful, clean, and work side by side with the negro waiters. Hieronymus watched them work for half an hour, and they gave satisfactory service.
Negro waitresses served in restaurants far less often than negro men. The Tip Top Inn, just like the Albion and the Pullman dining cars, had always been staffed with negro waiters, some of whom worked there for decades. It was said that anyone who worked at the Tip Top could find employment in any restaurant across the country.

In the book “Black Bolshevik,” author Harry Haywood (the son of former slaves who became a leading member of the Communist Party and a pioneering theoretician on the negro struggle. Originally published in 1978) wrote in his autobiography that he quickly worked his way up from Tip Top Inn busboy to a waiter and then landed jobs on the ultra-modern Twentieth-Century Limited train and with Chicago’s Sherman Hotel and Palmer House.

By 1931 when the Tip Top Inn restaurant closed, it was regarded as an old-fashioned holdover from a previous era. Its extensive menu of specialties such as Stuffed Whitefish with Crabmeat, Suzettes Tip Top, and Alice Salad[1], some of the more than 100 dishes created by Hieronymus, was no longer in vogue.

The outlawing of alcoholic beverages proved challenging to the Tip Top Inn, as it did to other leading Chicago restaurants of the pre-Prohibition era such as Rector’s, the Edelweiss, and the Hofbrau, all of which would go under before the ban on selling alcohol ended.

Aside from Prohibition (1920-1933), Hieronymus attributed the restaurant’s demise to the death of gourmet dining. Hieronymus died in1932, but he and his restaurant were remembered by Chicagoans for decades.

The Pullman Building was demolished in 1956. 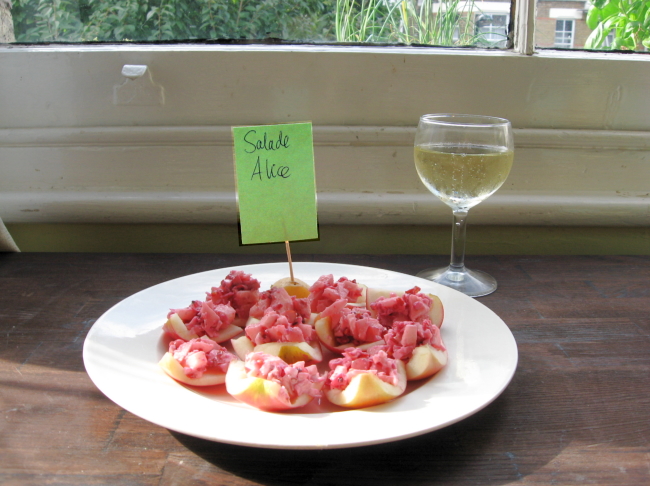