The History of Charles "Carl" Frederick Günther, known as "The Candy Man" and "The P. T. Barnum of Chicago." 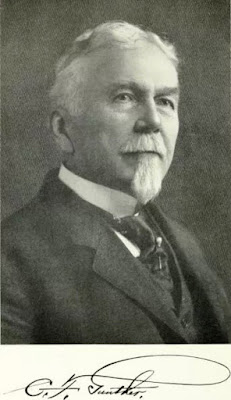 Charles "Carl" Frederick Günther (1837–1920), known as "The Candy Man" and "The P. T. Barnum of Chicago," Gunther was a German-American politician, caramel confectioner, chocolatier, numismatist, and art, antiquities, and curiosities collector, who purchased many of the coins and artifacts now in the Chicago History Museum.

Born in Wildberg, Württemberg, Germany, on March 6, 1837. He emigrated with his parents to Pennsylvania when he was five years old in 1842. They moved from Pennsylvania to Peru, Illinois, in 1850.

At the age of 14, he was employed as a clerk in a country store and later went to work in a drug store "where he gained quite an insight into the art of pharmacy." Gunther became a manager of the post office in Peru, Illinois. He spent five years employed by a banking house. Then moved to Memphis, Tennesee, and was employed by a local ice dealer in 1860.

Upon the outbreak of the Civil War, he was employed as purchasing agent and purser of the steamer "Rose Douglas" in the Confederate Service. Being captured when blockaded in the Arkansas River by Federal gunboats in Van Buren, Arkansas, "he was released in a prisoner exchanged and made his way north until he finally reached Peru."

"His life while acting in this capacity was anything but peaceful, and his adventures were many." Gunther returned to Peoria, where he was employed by a banking house. Then Gunther joined C. W. Sanford, a Chicago confectioner, as a traveling salesman visiting the principal cities of the South and those in Ohio, Michigan, Indiana, Illinois, Kentucky, and West Virginia." In the Fall of 1863, he next entered the employ of a wholesale grocery house. The line was not to his taste, and he entered the employment of a New York confectionery house, which he represented in the New England, Middle, and Western states.

In the meantime, Gunther had traveled extensively in Europe and Asia. He knew how these people prepared confections and, combined with what he learned of the business while representing manufacturers of confectionery on the road, made him finally decide to enter business on his account.

Gunther opened his own candy factory and store at 125 Clark Street in Chicago in the Fall of 1868. He originated and introduced caramels, a staple product of all factories ever since. Among his confectionery treats were candy chocolate cigars he called 'La Flor de Gunther Cigars' de chocolate.'


Captain William Barker of Hook and Ladder Company № 9, Chicago Fire Department, was born in Chicago on October 13, 1863, and joined the Fire Department on April 14, 1887. Due to the "Saturday Night Fire" on October 7, 1871, there was an empty water reservoir. At the disastrous fire in the Gunther confectionery establishment on October 8th the building was razed by the Great Chicago Fire. Gunther did not have insurance on his inventory.

But great feats of heroism were performed during the fire. About 250 panic-stricken girls who were at work making bonbon's for the autumn festival, were rescued uninjured. Baker and his men were badly burned about the face and hands. They said that hey would never forget this experience because the spectators were yelling at the firefighters begging them; "for God's sake, come down the ladder!"

The factory and retail store at 125 South Clark Street was utterly destroyed, leaving Gunther with almost no resources. Besides the building and inventory lost in the fire, his newly formed collection of rare artifacts, including a copy of the Emancipation Proclamation, was also destroyed.
Gunther reopened a temporary kitchen and store at 78 Madison under the McVicker Theater in 1871-72. His business began to take off and boom by 1875. He renamed his business "Gunther's Candies Company" and built a factory with a store at 212 State Street, "a model example of a retail store and factory." 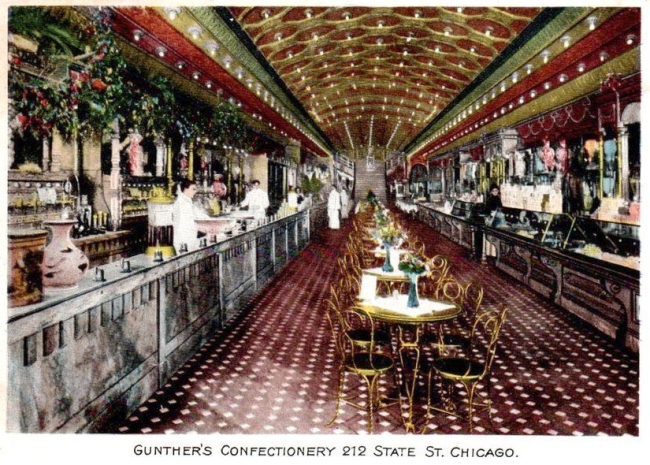 "By 1886, his name as a manufacturer of candies was known from one end of the country to the other."


Excerpt from "Chicago by Day and Night. The Pleasure Seekers Guide" Published in 1892.

Coming to the consideration of candy, confectionery, and fine fruits, the name of Charles Gunther first challenges attention. The Gunther store, 212 State street, is without doubt one of the sights of the city, containing, as it does, in addition to the regular stock-in-trade, the Gunther museum, which the proprietor has spent the best years of his life in collecting. The museum embraces curios of all sorts and some of them are of great value. The entire collection is worth a fabulous amount and there is a well-defined impression abroad that the owner intends to give it to the city some day. The furnishings of the Gunther store are magnificent. Tall mirrors reflect the customer's shape at every step. The rear part of two floors is dotted with tables, at which iced drinks, ice cream, and light luncheons are served. Whether with a view of purchase or not, the store will well repay a visit. Gunther's candy is advertised the country over, and the concern enjoys an enormous out-of-town trade.

Gunther added another factory with a retail store on the ground floor at 1018 South Wabash Avenue in Chicago.
By the early 1900s, Chicago was called the world's Candy Capital, and Chicago was home to over one thousand candy purveyors, associations, and publications supporting confections.

At that time, he began decorating his candy store with antiques, artifacts, coins, and curiosities. In 1877, he purchased the deathbed of Abraham Lincoln, which he set up in his store.
Gunther introduced his caramel-coated popcorn with peanuts in the late 1860s, which became the rage at the 1893 World's Fair. It was later named "Cracker-Jack," and Gunther was given yet another nickname, the "Cracker-Jacks King."

Frederick "Fritz" William Rueckheim and his brother Louis claim to have sold Molasses and sugar-coated popcorn mixed with peanuts at 113 Fourth Avenue (today's Federal Street) in Chicago beginning in 1871. The issue is that type of product was already known by the 1860s.
Both claims involve introducing this product at the 1893 World's Fair. Whomever it was, Cracker Jack is still popular today!

As a frequent business traveler, he used his trips to the East and South to scour for items to add to his collection. As his reputation grew, many people, including Civil War veterans, anxious to turn what they had in storage into cash, would contact him in Chicago. With wealthy customers like socialite Bertha Honoré Palmer, Gunther amassed a fortune and began purchasing historical artifacts to display in his factory. Many artifacts were from the Civil War, but his collection also had more unusual items, such as shrunken heads. Gunther was extraordinarily naive and was easily bilked by flimflam artists who sold him fake relics and antiquities like the West Point Chain, the mummified remains of Moses' foster mother Bithiah, and the "Skin of the Serpent that tempted Eve in the Garden of Eden."

Gunther's collection continued to grow, and he eventually turned his sights to the Libby Prison, a former Confederate prison in Richmond, Virginia. Gunther purchased the structure and had it dismantled and shipped to Chicago, where it was reassembled and converted into a museum to house Gunther's artifacts. 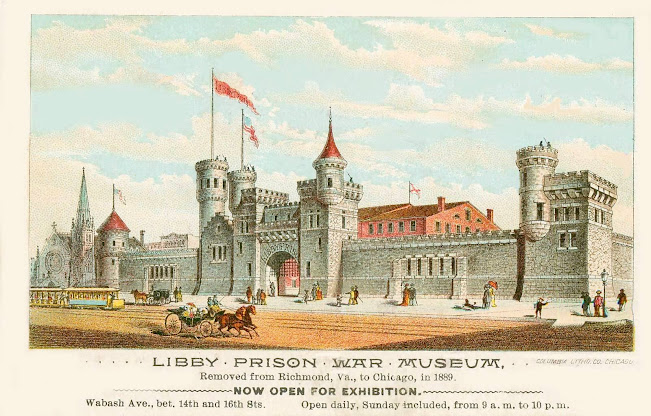 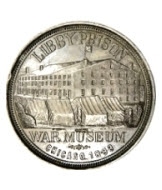 The Libby Prison War Museum was on Wabash Avenue between 14th and 16th Streets, opened to the public in 1889, and hosted thousands of visitors within its first few months. The prison's infirmary was converted into the Lincoln Room, in which Gunther displayed Lincoln's deathbed and other artifacts associated with Lincoln's assassination. Although the Museum was in Chicago during the 1893 World's Columbian Exposition, it had no connection with the World's Fair and was never considered a Fair attraction. Gunther later tried to purchase an Egyptian pyramid and Philadelphia's Independence Hall to bring them to Chicago, but he was unsuccessful.

During the 1890s, Gunther became involved with Chicago's growing convention industry. When the original Chicago Coliseum burned down in 1897, Gunther decided to build a new Coliseum on the site of the Libby Prison War Museum since attendance at the museum was beginning to wane. He was the organizer of the Coliseum Company and its first president. He gave many paintings to the Y.M.C.A. hotel, and some of his finest works adorned the walls of the South Shore Country club, to which they had been loaned.

The prison building was disassembled, and parts of it were donated to the Chicago Historical Society, of which he was a director for twenty years. Gunther offered the rest of his collection to the City of Chicago, hoping that the city would build a museum for it in Garfield Park. Illinois law prevented such a building from being constructed on public parkland.

Gunther served two terms (1896–1900) as a Chicago alderman and one term (1901–1903) as city treasurer. He was briefly a Gold Democrat and supported John McAuley Palmer for president in 1896. In 1908, Gunther sought the (regular) Democratic Party's nomination as an Illinois gubernatorial candidate but lost to Adlai E. Stevenson I. 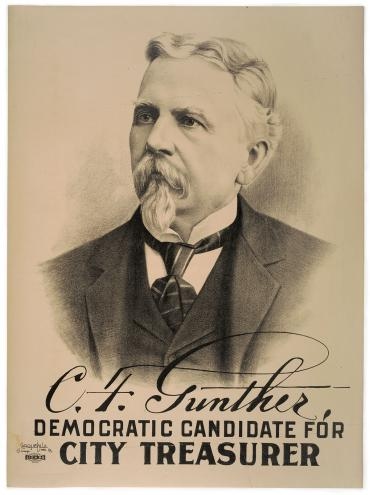 He offered his entire art and historical collection to the city of Chicago, providing a fire-proof building was erected for it. The city made no appropriation, and he left it to his widow and son in his will. Gunther was a thirty-third-degree Mason, a member of the Medinah Temple shrine. Other affiliations were the Academy of Sciences and the Art Institute, of which he was a trustee. Geographical association, Chicago Association of Commerce, and Illinois Manufacturers Association. The Iroquois, Union League, Illinois Athletic, Aero, Germania, and Press Club were his clubs. Mr. Gunther was also a member of the Illinois State Historical Society.

He died of pneumonia on February 10, 1920, at 83, at his home, 3601 South Michigan Avenue in Chicago.
His funeral was at his home. He was buried in the family mausoleum at Rose Hill Cemetery in Chicago, where his son Whitman (1872-1907) had been interred thirteen years earlier.
After Gunther's death, the Chicago Historical Society purchased Gunther's vast collection, paying $21,321.20, far less than the originally agreed-on price from the estate of $150,000.

Shortly afterward, the Chicago Historical Society began building a $1 million museum to display its expanded collection. The building opened in 1932 at Clark Street and North Avenue and is currently known as the Chicago History Museum.