The History of Chicago Historical Society and Buildings.

After the fire, the Society began collecting new materials, which were stored in a building owned by J. Young Scammon, a prominent lawyer and member of the society. However, the building and new collection were again destroyed by the Chicago fire of 1874.

The Chicago Historical Society built a fireproof building on the site of its pre-1871 building at 632 North Dearborn Street (700N, 100W) at the NW corner of Ontario Street built-in 1892 by Henry Ives Cobb. 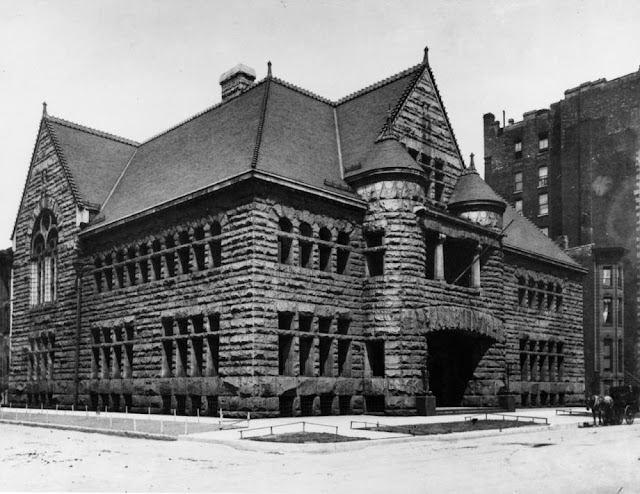 The replacement building opened in 1896 and housed the Society for thirty-six years. The building was later added to the National Register of Historic Places as the Old Chicago Historical Society Building.
Charles F. Gunther, a prominent Chicago collector, donated some items to the Society. In 1920, the Society purchased the remainder of the large history collection from his estate, with the intention of changing its focus from only a research institution into a public museum. Many of the items in Gunther's collection, in addition to Chicago, were related to Abraham Lincoln and the American Civil War. These include Lincoln's deathbed, several other pieces of furniture from the room where he died in the Petersen House, and clothing that he and his wife Mary Todd Lincoln allegedly wore the evening of his assassination. The collection also contains the table on which General Robert E. Lee signed his 1865 surrender to General Ulysses S. Grant, an official act which ended the American Civil War, at the McLean House in Appomattox, Virginia.

After 36 years on Dearborn Street, the Society moved to the current structure in Lincoln Park. The current home of the museum was designed by Graham, Anderson, Probst & White and constructed in 1932 by the WPA, with the aim of creating an expanded public museum.
The 1932 Federal-style structure has been expanded twice. The first addition clad in limestone opened in 1972 and was designed by Alfred Shaw and Associates. The second addition was designed by Holabird and Root, which was built in 1988 and included refacing the earlier expansion in red brick to give a unified look to all three portions of the building. Both expansions occurred on the west side of the 1932 structure, leaving intact its original porticoed entrance facing Lincoln Park.
The main entrance and reception hall, however, was moved to the new western addition facing Clark street. The 1988 extension, in addition to expanded exhibition galleries, also contains the museum's store and a public cafe.
The Chicago Historical Society changed its name to the Chicago History Museum in 2006.