To the pioneers moving west from the east coast towards the Mississippi River, a road was any kind of a worn track or path leading to a designated point. Some paths were well defined by animal migration.
Don't miss my in-depth study of pre-paved Chicago: Plank Road History in the Chicago Area.

The Romans claimed to be the first to construct a cobblestone road which appeared on Rome's unparalleled network of about 75,000 miles worth of roads beginning in the Third Century (201-300AD).

The Roman roads were notable for their straightness, solid foundations, cambered surfaces (slightly arched to facilitate drainage), and the use of a form of concrete made from pozzolana (volcanic ash) and lime to set the stones.
The term "Cobblestone" (River Rock in North America) was derived from the ancient English word "cob," which had a wide range of meanings, one of which was "rounded lump" with overtones of a larger size. "Cobble," which appeared in the 15th Century, simply added the diminutive suffix "le" to "cob" and meant a small stone (usually ten inches or less) rounded by the natural flow of river water.

Cobbles were set in sand or mortar, a method of paving streets common from the 15th into the 18th Century, when hamlets and villages wanted to improve dirt road travel. These routes made travel more reliable and less weather dependent, and they also do not get muddy or rutted by rain like dirt roads do. 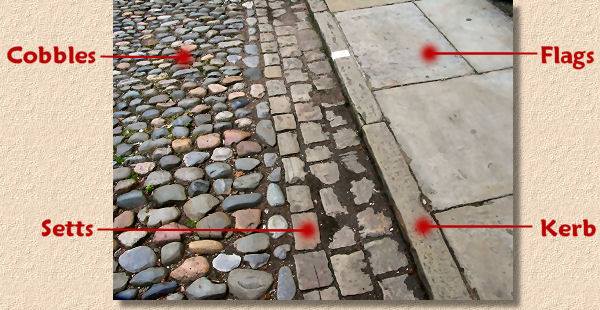 In 1846, the City of London in the United Kingdom decided to replace its wood paving blocks with granite. Upon removing the old wooden blocks people were allowed to take the wood, most using it for heating by fireplace.  In the 1850s practically all of the carriageways had been paved with granite setts from Scotland. However, the streets were often muddy in wet weather and full of dust in the summer. ‘Scavengers’ were employed to clean the streets and cart away the mud and manure.
How the City of Chicago dealt with 1,660 tons of daily horse manure.

People often confuse Belgian block with cobblestone or call both by the same name. Nobody seems to confuse them with antique brick streets that were popular at the same time. Cobbles are very different from Belgian Blocks, and the difference is plain to see if you know what to look for. Belgian Blocks are rectangular or square, whereas cobbles are roundish and typically have smooth edges.
In contrast, Belgian blocks were quarried (limestone) and carry the shape and tool markings that come with the stone cutting process. The rougher texture may have given them a rough and noisy ride on carriages and today’s automobiles. Still, that rough texture and angular shape were imperative to creating a good solid foundation for the horse-drawn carts of those days.
There is also "Belgian Woodblock" (aka Nicolson pavement), which Chicago started using by 1853. The Belgian woodblock paving method was preferred because it was so cheap, but was unsuitable unless pitched and sanded over.

Public cobblestone roads are maintained in many historic towns and districts in the country's eastern half. They are also used for new public and private decorative construction purposes, such as Koi ponds and water features.