How the City of Chicago Dealt with all the Horse Manure.

Manure vaults were underground covered holes in alleys all over Chicago that "Manure Mongers" (street sweepers) would swept-up horse manure from the local area and empty it into the vault closing the lid. Later, the vault would be shoveled out, and the manure carted off.
Workhorses were used for personal transportation, pulling streetcars for public transportation, and delivering materials and products to commercial and residences. These vaults were one way of keeping the streets clean of horse manure.

In the late 1890s, Chicago had about 83,000 horses living and working in the city. On average, one horse creates between 40 to 50 pounds of manure daily at 40 pounds per day, or 3,320,000 pounds, or 1,660 tons of horse manure to dispose of daily. Furthermore, each horse produced around 2 pints of urine per day. The sheer volume made what was a nuisance in small towns and a crisis in large metropolitan areas. 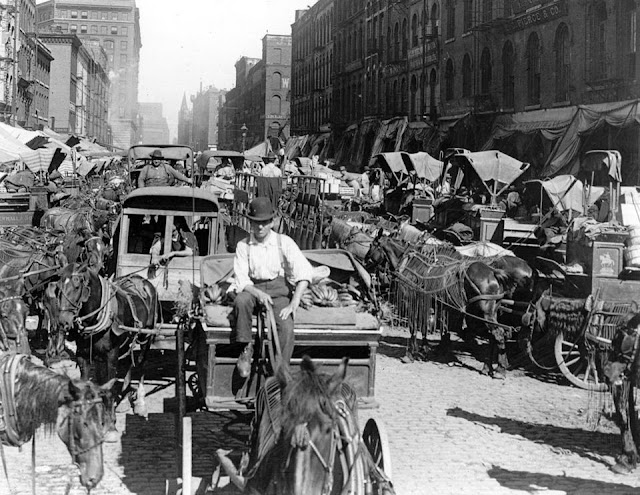 The manure was smelly, dirty, and attracted flies, spreading diseases to humans. When it dried up and became dust, the breeze would spread the manure for miles, polluting the air and sickening Chicagoans. Some of it was shipped to area farms for agricultural use, and some were mixed in with cement as a binder and used to pave streets. Still, there was too much manure to efficiently dispose of.

With the upcoming World's Columbian Exposition scheduled to open in 1893, Chicago made the cleanup of manure a critical priority in 1892. It would be embarrassing for the city to have filthy streets when Chicago would be under worldwide scrutiny.

One strategy to deal with all the manure was the underground manure vault to diminish the problem. Manure was bailed and transported out of the city, along with manure being incinerated. The ultimate solution to the manure problem was just beginning in the U.S.

In 1893 Frank Duryea was reported to have made the first horseless carriage trip on U.S. roads in Springfield, Massachusetts. He traveled approximately 600 yards before engine problems forced him to stop and make repairs. America's First Automobile Race took place in Chicago, Illinois, in 1895. Winner, Frank Duryea, traveled 54 miles at an average of 7.5 mph in 10 hours and 23 minutes, including repair time, marking the first U.S. automobile race in which any entrants finished.