Note the airplane on the south side (left) of the restaurant, at the Chicago Municipal Airport.

Originally named Chicago Air Park, Midway Airport was built on a 320-acre plot in 1923 with one cinder runway mainly for airmail flights. In 1926 the city leased the airport and named it Chicago Municipal Airport on December 12, 1927. By 1928, the airport had twelve hangars and four lighted runways for night operations. 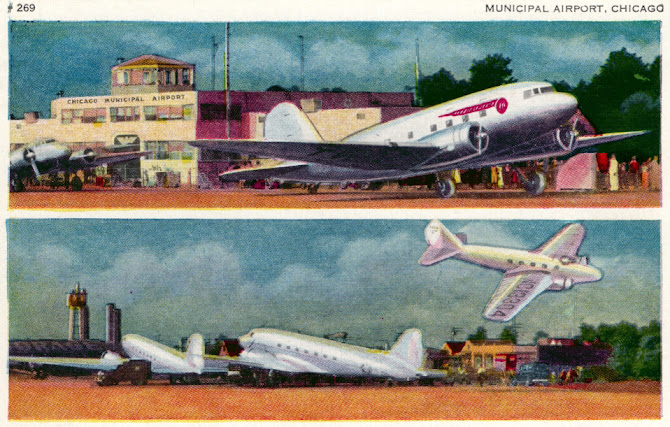 A major early morning fire on June 25, 1930, destroyed two hangars and 27 aircraft, "12 of them tri-motor passenger planes." The loss was estimated at more than two million dollars. The hangars destroyed were of the Universal Air Lines, Inc., and the Grey Goose Airlines, the latter under lease to Stout Air Lines. The fire followed an explosion of undetermined cause in the Universal hangar.
In 1931 a new passenger terminal opened at 62nd Street. The following year the airport claimed to be the "World's Busiest" with over 100,846 passengers on 60,947 flights. More construction was funded in part by $1 million from the Works Progress Administration; the airport expanded to fill the square mile in 1938–41 after a court ordered the Chicago and Western Indiana Railroad to reroute tracks that had crossed the square along the northern edge of the older field.

In July 1949 the airport was renamed Chicago Midway International Airport after the Battle of Midway. In 2002 Midway welcomed the return of international service after a 40-year absence with the opening of the new Federal Inspection Service facility in Concourse A.
Today, Midway has 5 runways and 43 gates in three concourses; Concourse A has 19 gates, Concourse B has 26 gates, and Concourse C has 3 gates.
Additional Reading:
Marshall Field & Company, Cloud Room Restaurant in the Chicago Municipal Airport (Midway).
Compiled by Dr. Neil Gale, Ph.D.
Presented by Dr. Neil Gale, Ph.D. at 4/22/2022 06:34:00 PM