Were there really train tracks through the center of Chicago Municipal Airport's (Midway) runways?

Originally named Chicago Air Park in 1923, the city leased the airport and renamed it Chicago Municipal Airport in 1927. Then in 1949, the airport was renamed Midway Airport to honor the 1942 Battle of Midway.

In 1929, aviation officials warned the City of Chicago that the airport was too small, too crowded, and bordered on being unsafe.

A major sticking point in the Chicago Municipal Airport's growth was the little problem of the railroad tracks running across the property at 59th Street, a ribbon of steel curtailing further expansion as effectively as a birdcage. In 1936, as 50-passenger, four propeller airplanes were on the horizon, city officials were warned again of the airport's limitations, this time by United Aircraft and Transport Corporation (founded in 1929).
The sensible suggestion that the tracks be moved north of 55th Street would prove a herculean task involving the City Council, state legislature, Illinois Supreme Court, and the federal government. 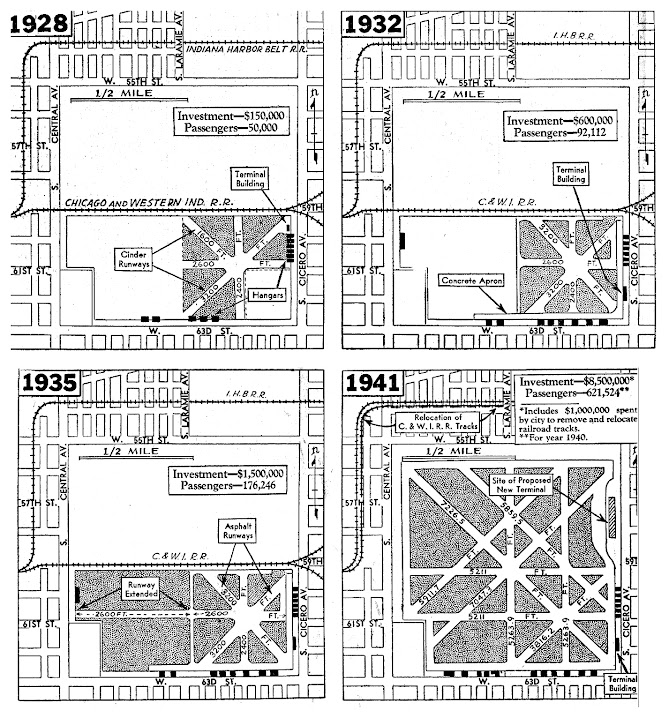 It took until 1941 to get the track moved. Indicative of the process, even after the new tracks were laid, the Chicago and Western Indiana Railroad refused to tear up the old tracks until the city paid money into an escrow account to cover $10,627 ($176,016 in 2017) they felt the city still owed them.
When Hale School was built in 1925, the most westerly extremity of the airport was along the path of South Laramie Avenue. However, in 1933 the east-west strip was extended westward to near South Central Avenue. In 1941, after the railroad tracks moved, two northeast-southwest runways that had been constructed around 1938 were opened up to air traffic, also adjacent to Hale School. It is accurate to say that from 1933 to 1951, Nathan Hale Elementary School sat as close as 200 feet from the ends of as many as three runways.
For most of those years, the airport was advertised as the "World’s Busiest Airport."

A runway accident and other close calls prompted school officials to discuss moving the school in 1949, but the move didn't happen for another two years while a new building was being constructed. The airport closed the runway close to Hale Elementary School during school hours. Then in 1951, a new building, keeping the name of Nathan Hale Elementary School, opened at 6140 South Melvina Avenue, two miles west of the airport.