In 1926 Chicago began leasing an airstrip for commercial purposes. A single cinder runway served airmail traffic. Chicago Municipal Airport was dedicated on December 12, 1927, offering mail, express, and passenger service.
Marshall Field & Company opened its Cloud Room restaurant, in the passenger terminal building of the Chicago Municipal Airport (Midway International Airport, today) on March 20, 1948. The night before the restaurant opening, Mayor Martin Kennelly was the guest of honor in the Cloud Room, a 3,600 square foot dining salon that overlooks the runways of the airport. Marshall Field & Company paid $90,000 ($1,020,000 today) to build out the second floor of the restaurant and $260,000 ($2,945,000 today) to equip it. Marshall Field & Company agreed to pay the city $2,596 or 5% of its gross business and 40% of its net profit.

NOTE: The above contract was a good deal for Marshall Field & Company with a captive audience. Between 1932 and 1961, Chicago's Midway Airport boasted the title of the "world's busiest airport." At its peak in 1959, the municipal airport served 10 million passengers.

You will find in food and service ... the sky's the limit in the Cloud Room!
There are good reasons why this is true.
For a world on the wing, the airport is the front door to the city. Here the traveler by air gets his first, sometimes his only glimpse of Chicago. Like any conscientious citizen, Marshall Field & Company want this impression to be the best.
That's why, just beneath the main control tower in the terminal building, you will find the Marshall Field & Company Cloud Room on the second floor.
It is an excellent restaurant in food and service — a showcase for Chicago. From your table in the windowed bay of the Cloud Room, you can sit and watch the drama of the skyways, the giant silvered planes that gather here from the far ends of the earth.
You can relax in comfort, dine to a gourmet's taste, admire the vermilion and gray decore, the shapes and shadows of Alexander Calder's mobile in brass, "Flight in Motion."

NOTE: Alexander Calder's mobile sculpture, “Brass in the Sky,” was placed in storage. Field's installed it in the Northbrook Court store. In 2001, when Target Corporation took over Marshall Field's in 2004 the mobile was donated to the Chicago Museum of Contemporary Art. Subsequently, the museum auctioned off the mobile fetching $2 million in 2005 from a private collector.

If you wish, you can inspect the shining stainless steel kitchens, as up-to-date and serviceable as a DC-6. Restaurant men have come from every part of the country to see them.
Sightseers, too, who come to watch the spectacular, real-life show from the promenades around the airport, will find a meal in the Cloud Room a fitting climax to their visit — especially since this meal takes place behind a wall of glass, one of the vantage points for viewing the coming and going of the giant airships.
All in all, the Cloud Room is a modern, cosmopolitan dining place for the traveler, the casual visitor, and the sightseer alike. It is because we want the Cloud Room to reflect this city's spirit of hospitality and this store's effort to be of service to the community. 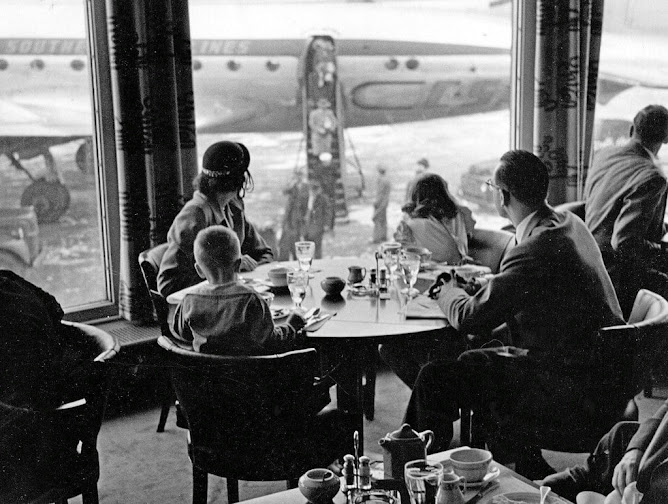