The J.W. Sefton Manufacturing Company made corrugated cardboard boxes of all shapes and sizes. They started small in Anderson, Indiana, location in 1888. Three years later, J.W. Sefton moved the company to Chicago, buying the Manilla Paper Company. Sefton also had a plant in Brooklyn, New York.

In the 20th century, the J.W. Sefton Manufacturing Company’s Chicago offices were buzzing with the arrival of a potential new customer: a glassware manufacturer from Oklahoma. The glass was shaped like a globe, and it was popularly used for gas street lamps.
Sefton was in a fledgling sector of making the newly invented corrugated board from yellow straw, referred to as strawboard. The company had started manufacturing wooden butter dishes. However, this changed when Jeffrey T. Ferres, an employee, patented a new principle to an existing ‘corrugator,’ known as a pressure-roll single facer.
Unfortunately, the glass executives were not convinced a rigid and pleated strawboard box would be better than their current wood box filled with excelsior (shredded wood).
Wood packing was the only option until then. It was expensive. Further, fragile items like glass globes often broke during transit.
The novel idea of a corrugated box had the added benefit of reduced weight, but it was unproven in the days when everything had to travel by train. Despite Sefton’s sales team citing how glass products were already being shipped to as far off as California, the glass executives weren’t biting; they needed a better sales pitch.
Therefore, Sefton’s design team got to work and designed a square carton with die-cut sunburst trays at both ends. The globe was now firmly suspended without touching the sides of the box. Now, for the demonstration. A dozen glass globes were packed in these newly designed cartons, taped shut, and brought to the top floor of Sefton’s Chicago building. Each box was booted down the stairs in a stairwell, floor after floor, until they arrived in the basement looking battered. When the cartons were opened, the glassmaker was surprised, as none of the globes were broken. This moment in time would be instrumental in bringing the corrugated carton out of the dark shadows of irrelevance and mistrust.
The genesis of modern corrugated production began at J.W. Sefton’s factories in Chicago and Anderson Indiana. In 1930, Sefton was purchased by Container Corporation of America.

After expanding over the years, the company built a state-of-the-art facility on 5-acres at 1301-1341 West 35th Street in Chicago's Central Manufacturing District in 1916. 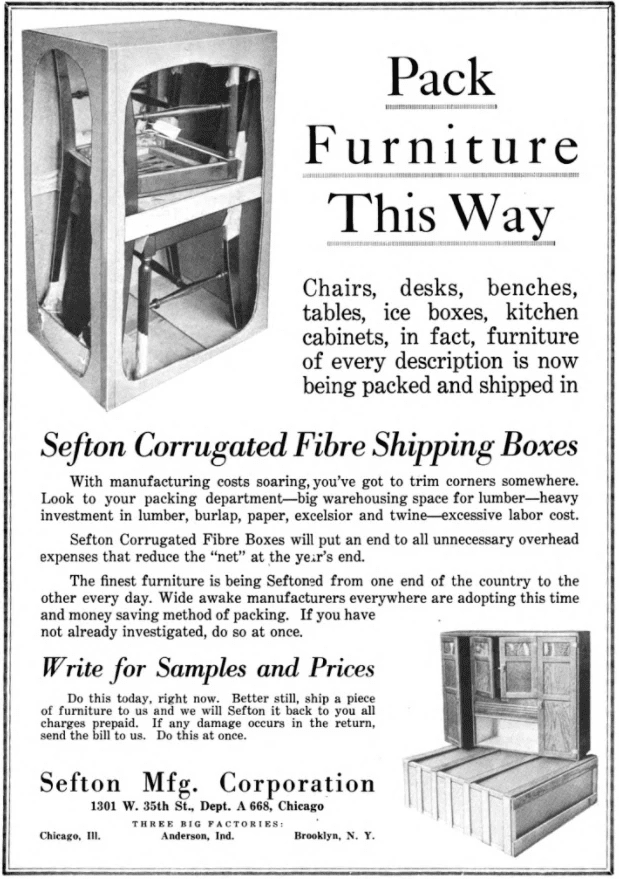 The Container Corp. of America was founded in 1926 by uniting several smaller-sized manufacturers of paper boxes and containers that included 14 plants around the country. The enterprise had its national headquarters in Chicago.
By 1930, the Container Corp. of America purchased Sefton Manufacturing Co. and operated four plants around Chicago, including those formerly owned by the Chicago Mill & Lumber Co., and the Robert Gair Co.
Compiled by Dr. Neil Gale, Ph.D.
Presented by Dr. Neil Gale, Ph.D. at 4/22/2022 10:44:00 PM