John Adams laid out this land in Pleasant Grove Township in 1852 hoping to build a town. Lots were available to anyone who could afford them. First named Farmington after Mrs.Adams’ Tennessee birthplace, this name was not officially recognized as there was already a Farmington in Fulton County. Campbell became the official name after Zeno Campbell moved the nearby post office into town shortly after its organization. The town has since been known by both names, Farmington and Campbell. 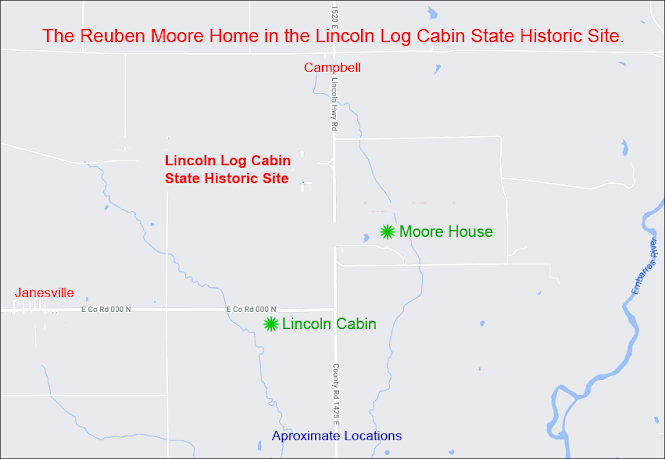 Farmington enjoyed its heyday in the 1870s when it had grown to about 100 residents. It boasted four stores, a carriage shop, blacksmith shop, steam flour mill, school, and two churches. The boom days, however, were short-lived. When the railroad passed up Farmington in favor of Jamesville a few miles to the south, local residents moved elsewhere. Today, only a few houses and a church remind passersby of the village.
One of the houses built in the town of Farmington in the 1850s was the house belonging to Reuben Moore. Moore was a well-to-do landowner involved in farming and land speculation. He and his first wife Mary emigrated to Coles County in 1839. In 1840, he traded 80 acres of land to Thomas Lincoln, which today is Lincoln Log Cabin State Historic Site. After his wife Mary died in 1855, Reuben married Matilda "Tildy" Anne Johnston Hall, Abraham Lincoln’s stepsister.
The Moore Home is a frame house constructed from rough-sawn 2x4 framing, lathe and plaster interior, and clapboard siding. Reuben Moore owned four city lots in Farmington. This included lot numbers 14, 15, 16, and 17, bordered on the east by Main Street, on the west by Washington, and by Jefferson on the north. Many people kept livestock in town so owning several lots was not uncommon. Space was also needed for a kitchen garden and a small orchard. Our concept of space within a town today is much different than that of the 1850s.
THE MOORE HOME CONNECTION TO ABRAHAM LINCOLN

On January 31, 1861, president-elect Abraham Lincoln visited the Moore Home and Coles County for the last time before his inauguration as president of the United States. Sarah Lincoln was staying with her daughter Matilda Johnston Hall Moore in Farmington while repairs were being made to the cabin at Goosenest Prairie. Lincoln visited his father’s grave at Shiloh Cemetery while the women of the town “brought their nicest cakes and pies, baked turkeys, and chickens” to the Moore Home. He found upon his return “tables set clear from one end of the house to another,” filled with food for a grand dinner. After dinner, Lincoln bid farewell to his stepmother. She embraced him and said, “My dear boy, I always thought there was something great in you.” He returned to Charleston that night in order to catch the train to Springfield the next day.
THE MARRIAGE OF REUBEN AND MATILDA
Reuben Moore married Matilda Johnston Hall on June 19, 1856. There were six children in the family, three from Reuben’s previous marriage and two from Matilda’s. A sixth child, named Giles, was born to Reuben and Matilda in 1856. The marriage of Reuben and Matilda was not a happy one, for when he died in July of 1859, he had all but disowned her. Matilda sued Moore’s estate for her “dower rights” and won title to the house and one-third of Moore’s estate. Miles Moore, Reuben’s oldest son, inherited most of the remainder of his father’s property.
THE SMOKEHOUSE SHED BEHIND THE HOUSE
The smokehouse was used to smoke meats after at-home butchering of a hog. It was common to use hickory wood to flavor the hams, bacon, and such.

THE RESTORATION
Inside views of the Moore Home show it as a very colorful and beautiful little house. It is quite a contrast to the 1845 log homes on and near Thomas Lincoln's Farm Site.
In an era when log homes with fireplaces dotted the countryside, the Moore Home represented a more urban style of home. It has plaster walls, clapboard siding, wood-burning stoves, and balloon frame construction.

The home consists of four rooms and a loft furnished to show the living conditions of a middle-class family after the Civil War. The State of Illinois acquired the Moore Home in 1929. The Civilian Conservation Corps renovated the home in the 1930s. At that time, the original brick foundation piers were replaced with a concrete foundation and the frame was built with a sag to make the house look “old."

Beginning in 1996, the Illinois Historic Preservation Agency restored the house to its original appearance, complete with a brick foundation, no sagging floor, correctly-sized windows, stenciled walls, and painted exterior. 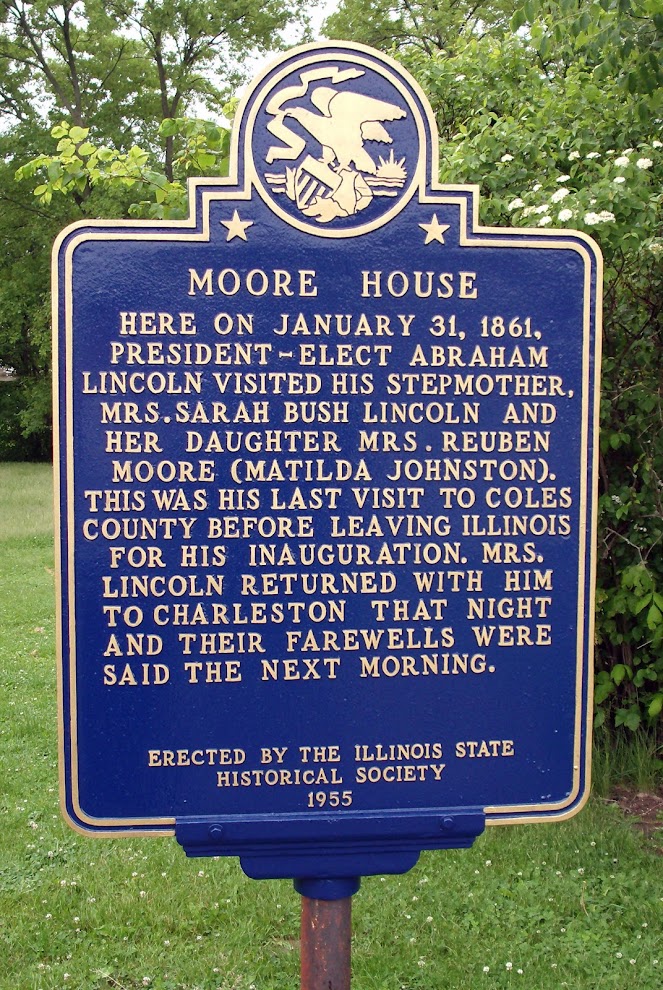