The History of the Egyptian Theatre in DeKalb, Illinois. 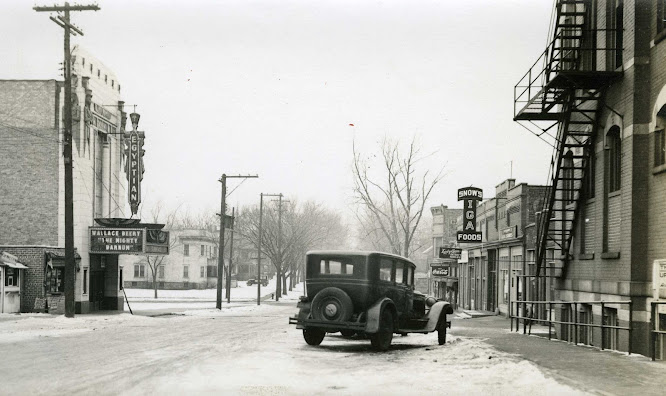 The Egyptian Theatre has roots back to the age of the pharaohs. This historic structure owes this connection to the discovery of the tomb of King Tut in 1922. That discovery set off a nationwide interest in everything Egyptian. The Egyptian influence reached DeKalb County in 1928 when the DeKalb Theatre Company was trying to settle on a design for a combination motion picture house and vaudeville theatre. Needing a larger facility than its theatre at the corner of First Street and Lincoln Highway, the firm talked with Chicago theatre architect Elmer F. Behrens. Contracts for the new theatre were awarded in 1928, but construction, other than a foundation excavation, did not start until Spring of 1929. Dale Leifheit was president of the DeKalb Theatre Company and served as the building’s first manager when it opened on Dec. 10, 1929. It is believed that the initial construction cost roughly $250,000. The theatre served a population of approximately 8,545 in the city of DeKalb and 32,644 in DeKalb County. 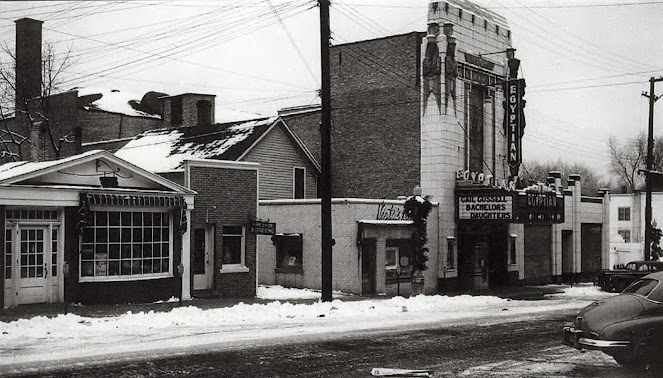 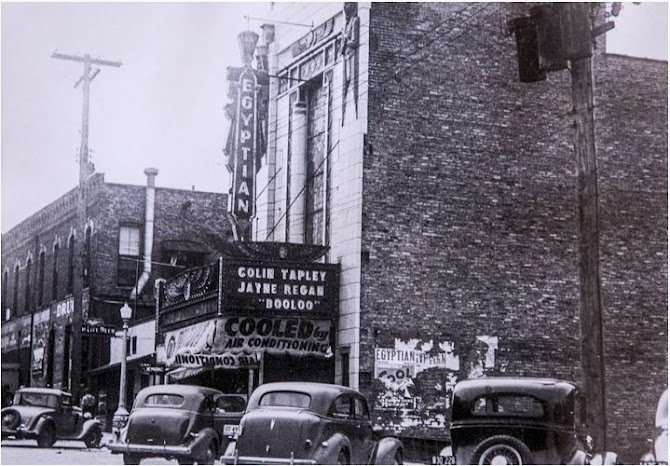 By the 1930s, the theatre was one of over 100 theatres across the country to decorate itself in an Egyptian style. Of all the Egyptian theatres, the DeKalb theatre is one of only 5 remaining and is the only Egyptian Theatre east of the Rocky Mountains. In the original design, additional buildings were supposed to be attached to the existing building, including a hotel on the north side, but they were never built due to the stock market crash in late 1929.
The stock market crash in October 1929 changed some building plans but failed to dampen the opening celebration. The unique broken-tile main lobby floor was a compromise with a dollar shortage; it was originally supposed to be marble. 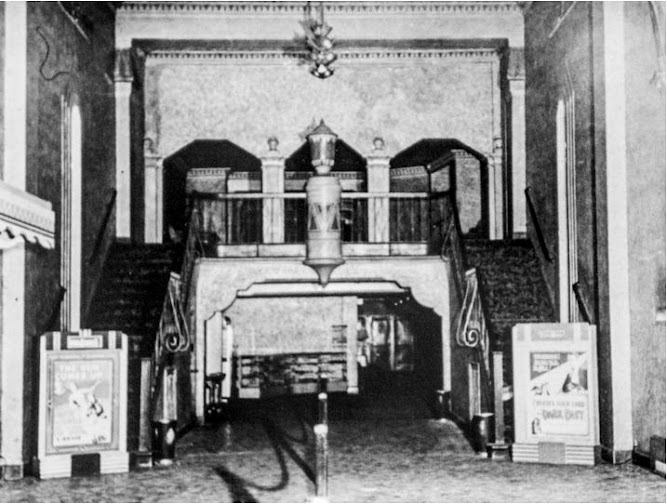 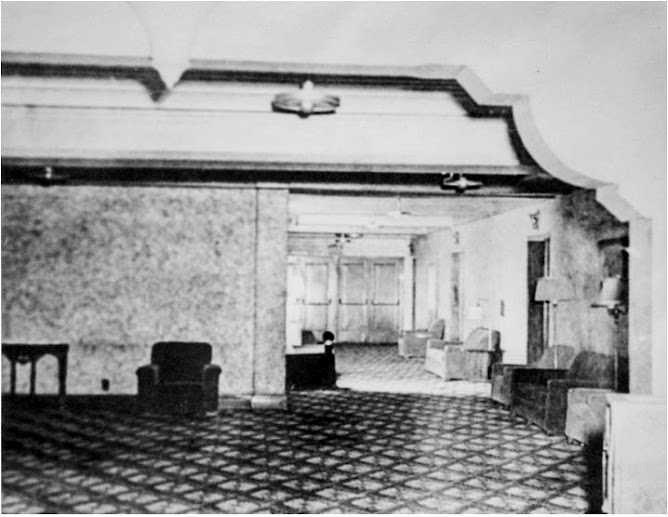 The theatre opened on December 10, 1929. The first film on the Egyptian’s giant screen was “The Hottentot,” an “all-talking” film about horse racing; general admission was 50 cents for adults and 25 cents for children. The live vaudeville acts generally were reserved for weekends between movie showings. Ownership of the Egyptian changed hands over the years, but for a majority of its commercial life, the building was owned and operated by the Thomas Valos family, who ran a chain of Midwest motion-picture houses.
In the forties and fifties, the Egyptian Theatre concentrated mostly on movies, with an occasional live event. On October 25, 1959, Senator John F. Kennedy made an appearance to a packed house at the Egyptian. A short three months later he would announce his candidacy for president. Throughout the sixties, the Egyptian was a movie house, although some exceptions still did occur.
In the early 70s, the aging theatre continued to show movies and sometimes hosted concerts by popular up-and-coming rock bands such as Journey and Heart. By the mid-seventies, the Egyptian was a ghost of its previous splendor. The plaster walls and interior motifs were crumbling away, the seats were in disrepair, the plumbing rarely worked, the boiler was no longer functioning, and there were holes in the ceiling letting in both rainwater and wild animals. In 1977, the Egyptian Theatre was closed and the property given over to the city of DeKalb.
With the theatre on the verge of being condemned in 1978, a group of citizens banded together to restore and save the Egyptian. The Egyptian was listed on the National Register of Historic Places in 1978. In 1982, Preservation of the Egyptian Theatre, Inc. (PET) qualified for a $2.3 million grant from the state of Illinois. This money allowed the restoration of the theatre to begin. Renovations were started in 1982 and finished by the fall of 1983.
When the theatre opened again in 1983, it was host to dozens of events a year. The diversity of events was impressive, with multiple community groups and national groups calling the Egyptian Theatre “home”. The Egyptian season was filled with live events, weddings, receptions, community meetings, and movies. The theatre continues to be home to DeKalb County’s largest movie screen at 35 feet wide and 22 feet tall.
Today, the theatre is utilized by the community for a wide variety of events and also attracts national touring acts. From 2006 – 2012 over $1.5 million was invested in restoration, maintenance, and upgrades to the Egyptian Theatre. In the summer of 2011, the original seats from 1929, which were still in use in the theatre, were sold off to the community and replaced by brand new seats that look nearly identical to the originals. Through the continued support of the community, the Egyptian Theatre is able to not only keep the doors of the theatre open but continue to improve the theatre for all to use and enjoy.
P.E.T.’s vision for the Egyptian Theatre since the beginning has been a community-based one. The success of the Egyptian Theatre has continually been embraced by both the arts community and by the people of DeKalb County. The vision of P.E.T. has grown from just keeping the doors open to opening new doors.
Over the years the Egyptian Theatre has been the stage for performances by Lawrence Welk, BB King, Jay Leno, Ray Charles, Winton Marsalis, Corky Segal, Danny Glover, Ron White, Brian Regan, Lewis Black, REM, Journey, Heart, The Violent Femmes, The Psychedelic Furs, Gaelic Storm and many more.
The Architecture 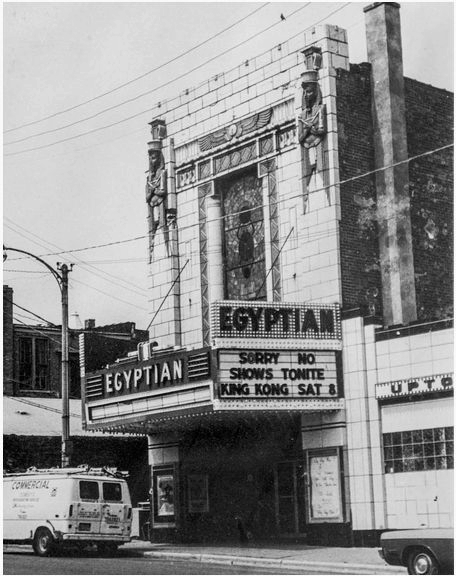 The architect, Elmer F. Behrns, designed nearly a dozen other art deco theatres across northern Illinois, including the Arcada in Saint Charles. Behrns studied and loved Egyptology and put his knowledge to good use when designing The Egyptian Theatre. Instead of throwing together hieroglyphics, Behrns put together a much more cohesive design than other Egyptian-themed theatres. Mr. Behrns designed this theatre with one central theme, that of Ramses II, also known as Ramses the Great. Ramses was the third Egyptian pharaoh (reigned 1279 BC–1213 BC) of the nineteenth dynasty. He is often regarded as the greatest, most celebrated, and most powerful pharaoh of the Egyptian Empire. His successors and later Egyptians called him the “Great Ancestor.” 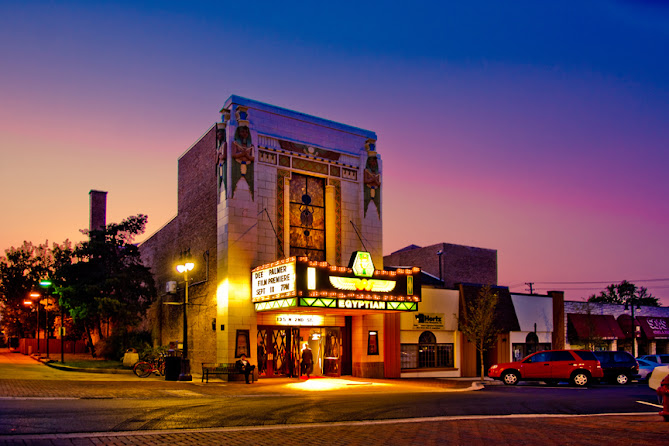 The Egyptian’s facade is covered with light sage terra cotta and features a 20-foot tall stained glass window bearing the ancient sacred scarab, holding up the sun god Ra while standing on the earth. 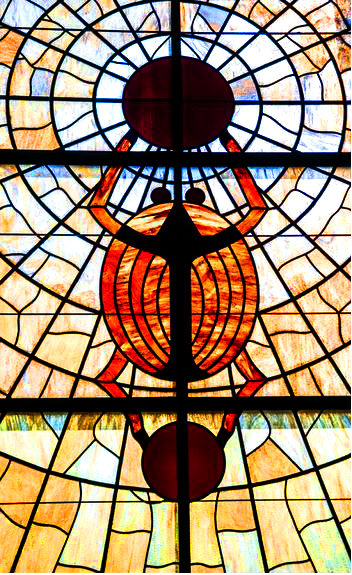 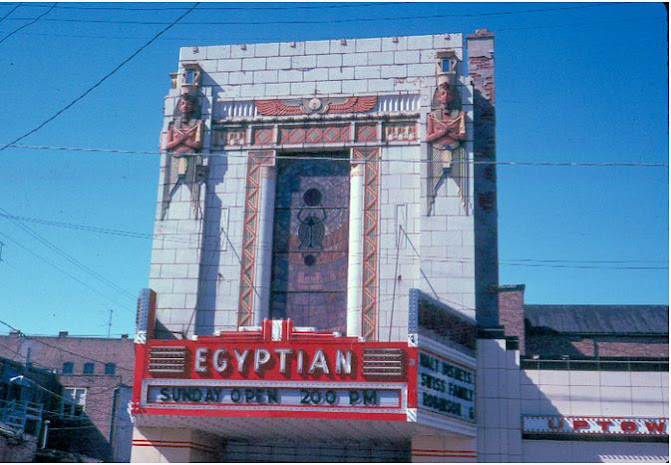 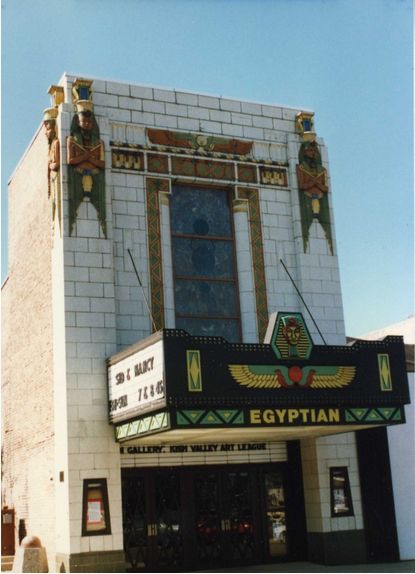 On each side of the stained glass window are two huge pharaohs guarding over the entrance of the theatre. The front of the theatre is shaped like the gate of a great temple. The current marquee is the fourth marquee to adorn the theatre and was commissioned in 1982 during the theatre's last large-scale renovation. 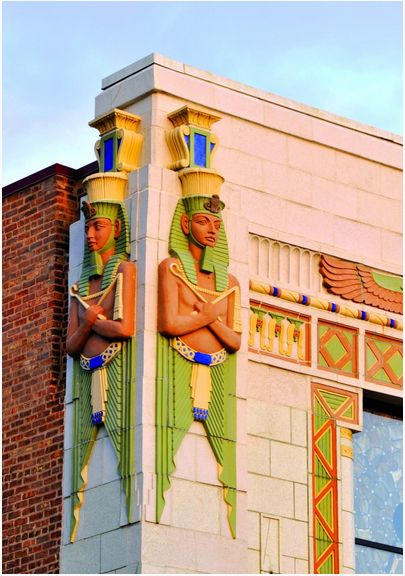 Stepping into the quiet small outer lobby is like stepping into the outer chamber of a tomb. With huge sandstone-like blocks for walls, the only adorned piece is the front of the ticket box office, dusky, sienna red with a golden sunburst above the window. 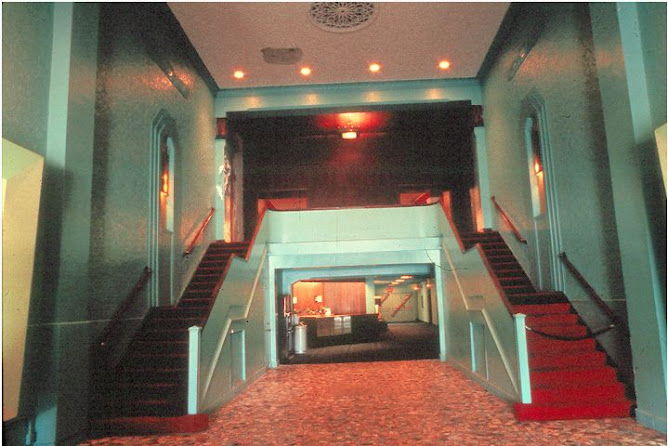 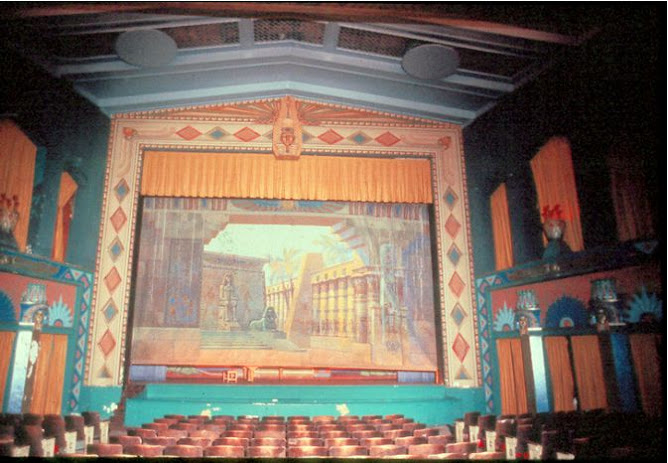 Passing through the glass doors into the main lobby, one finds the original mosaic multicolored tiled floor underfoot. The tiles used in the lobby area called faience tiles or tin-glazed pottery. This type of pottery was found in Egypt as early as 4000 BC. The specific tiles used on the lobby floor in the theatre were gathered from other businesses around DeKalb during construction. Every little piece is a piece of DeKalb's history. 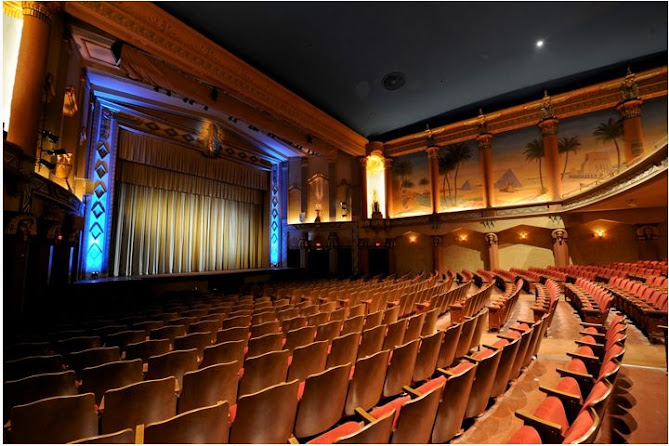 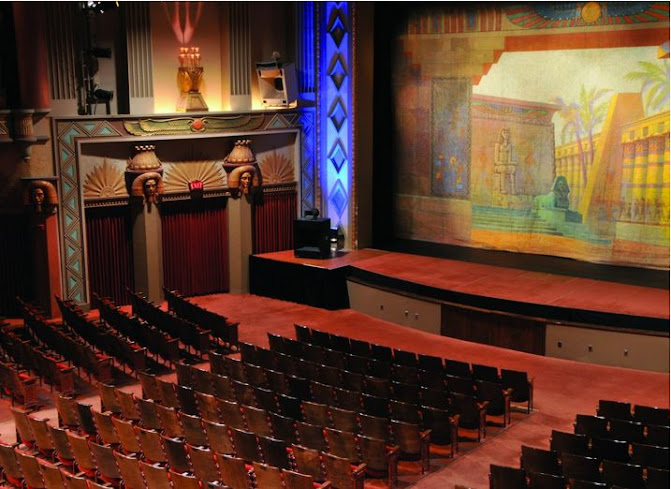 The ceiling towers above the tile floor some 40 feet. Cream-colored plaster walls on either side are decorated with eight towering ecru-colored pillars adorned with cornices of golden lotus blossoms and palm leaves. This stately hall is quietly elegant and is the setting for many private parties and weddings. 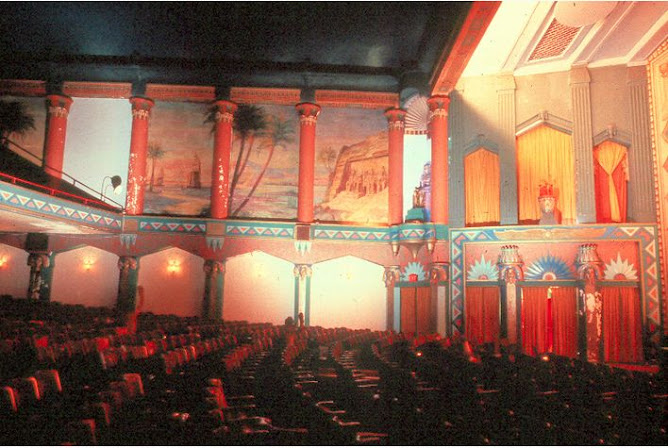 Two-thirds the way up the walls between each pillar are huge golden plaster urns, six in all, adorned with lotus buds and palm leaves. Above each urn are outstretched golden falcon wings with the sun entwined with golden serpents. Below each urn is a frosted sconce that matches the frosted milky-colored commissioned chandelier that also bears the lotus blossom pattern. At the end of the main lobby is the original double staircase that cradles the chandelier, leading to the mezzanine and balcony.
Moving into the auditorium from the quiet and stately main lobby finds a royal Egyptian courtyard. Murals adorn the walls of Egyptian landmarks such as Abu Simbel, The Pyramids of Giza and the Temple of Ramses II. Overhead tiny star-like lights twinkle against the sky blue ceiling. Truly, this theatre is one of the more incredible examples of the Egyptian style.
Compiled by Dr. Neil Gale, Ph.D.
Presented by Dr. Neil Gale, Ph.D. at 4/12/2021 12:42:00 PM