When Abraham Lincoln prepared a brief sketch for the artist, Thomas Hicks on June 14, 1860, he wrote in referring to his birthplace, "I know no means of identifying the precise locality." It was not until the editor of Lincoln Lore made his documentary researches in Hardin County, Kentucky that the "precise locality" of the Lincoln farm was established by duly authorized court records.

When Richard J. Collier purchased what was known as the birthplace farm in 1905, he had no assurance but tradition and folklore that the land he acquired was once in possession of Thomas Lincoln, father of the 16th President. One newspaper account of the Collier purchase stated that "Since the birth of Lincoln on February 12, 1809, the farm has changed hands only twice.
Thomas Lincoln sold the land to Richard Creal about the time the family moved to Indiana in 1816." Richard Creal did not acquire the part of the Lincoln farm where the cabin stood until August 26, 1867, fifty years after the Lincolns left Kentucky. By that time the cabin tract had changed hands eleven times. Creal added this tract to a hundred-acre survey he had previously acquired and after some changes in the boundary sold 110½ acres to A. W. Dennett in 1894, specifying in the deed that it was the farm on which Abraham Lincoln was born.
When the United States came in possession of the traditional birthplace farm in 1916, there was no abstract title available which proved that the farm was once in possession of Thomas Lincoln. In fact, there were those primarily interested in the project who claimed that Lincoln lived on a squatter's domain so the boundaries of any specific piece of ground surrounding the cabin were of no importance.
But Abraham Lincoln was not born on a squatter's domain. Thomas Lincoln paid $200, "cash in hand" in December 1808 for a 300-acre tract on which the birthplace cabin stood. The document showing Thomas Lincoln's ownership of the land is in the Hardin County Circuit Court records, a copy of which follows with the endorsements of David Vance and Isaac Bush:

MATHER TO VANCE — BOND
"Articles of agreement made this First Day of May 1805 between Richard Mather of the County of Hardin, and the State of Kentucky and David Vance of the County and State aforesaid witnesseth that I have sold to the said David Vance a certain parcel or tract of land on the waters of the South Fork of Nolin containing 300 acres beginning near or at a spring called the Sinking Spring, to be twice as long as wide and including as much of a grove called the Little Turkey Grove, as will fall within the boundary as aforesaid and I do obligate myself to make a deed with a general warranty to the said David Vance when the said David Vance has made full payment to Richard Mather or his order for the aforesaid land, in witness whereof we have inter-changeably set our hands the day and year above written. Signed Richard Mather. Witnesses: John Gum, Shepherd Gum."
Endorsement. No. 1. "For value received I assign the within the agreement to Isaac Bush, given under my hand and seal this 2nd Day of November 1805. Signed David Vance. Witnesses: Ben Helm, John Miller."
Endorsement. No. 2. "For Value received I assign the within the article to Thomas Lincoln. Witness my hand and seal the 12th Day of December 1808. Signed: Isaac Bush; witness, Sam Haycraft."

It was not long after Thomas Lincoln acquired the land that it was in litigation over payments Vance had failed to make to Mather. The court decreed Thomas Lincoln should receive from William Bush the $200.00 he had paid for the land, and he moved from the premises in 1811. This tract of land, originally in possession of Thomas Lincoln, was surveyed by order of the court in 1837 and was found to contain 348½ acres instead of the designated 300 acres.
The boundaries follow: 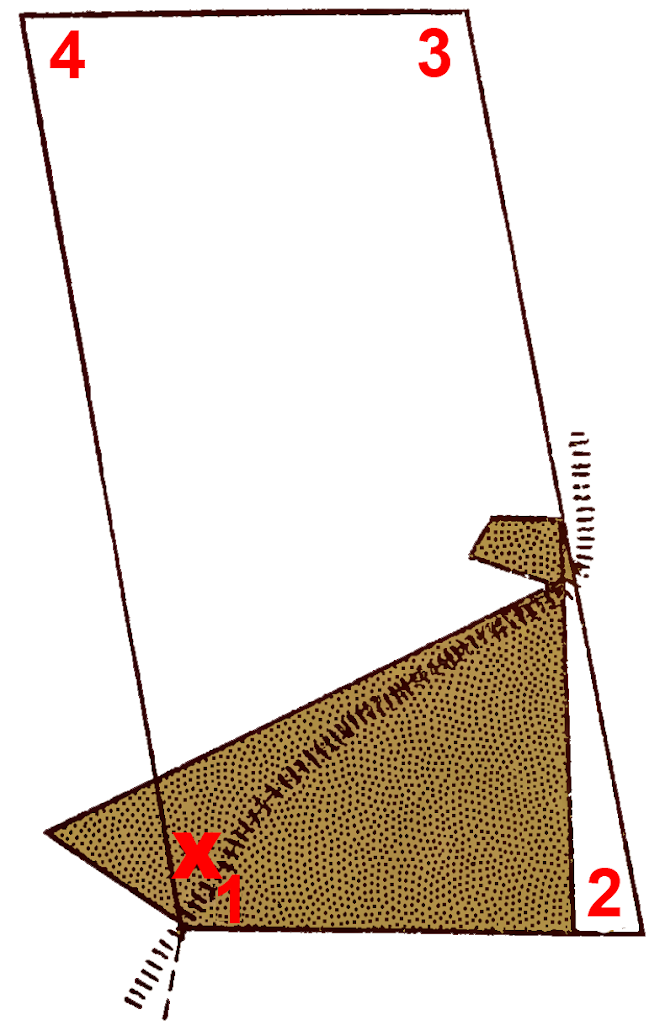 The above survey was divided into several smaller tracts including one of nine acres surrounding the Lincoln cabin, which at the time designated has been in possession of the following property holders since it was first patented as part of a 30,000-acre survey:

The titles to the other tracts cut out of the original Thomas Lincoln 348½ acre survey have been traced through the court records so that it is now, documented proof for the "precise location" of the Lincoln Birthplace Farm. 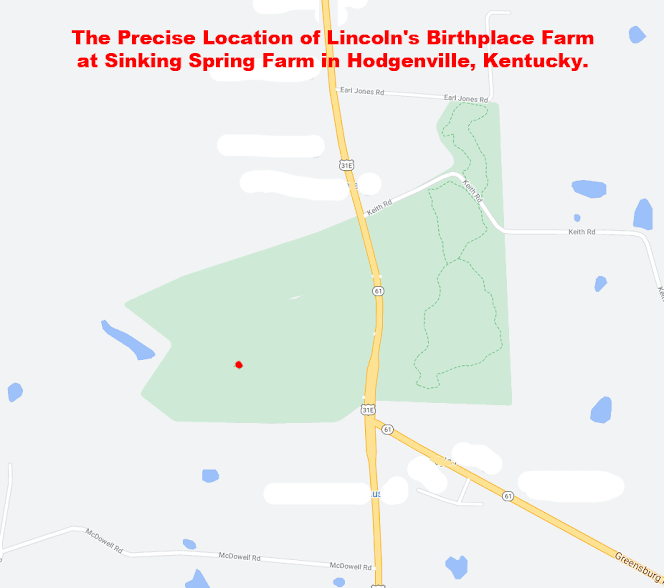