The Stone Forts of Illinois.
One of the unique prehistoric phenomena of Southern Illinois is the ruins of stone walls which have traditionally been known as "stone forts." They appear in the rough east-west alignment across the hill country and appear to form a broken chain between the Ohio and Mississippi Rivers. These ruins have similar geographic site characteristics. They are generally located on bluffs, which are often finger-like promontories of land with steep cliffs on three sides and a gradual incline on the fourth. It was across these inclines leading to the top of the bluff that these stone walls are most generally located, hence the theory of a pound or game trap, has been advanced.
Many of the walls have long been torn down and removed for building purposes. Early settlers, in most instances, removed the better slab-like stones for building foundations, leaving only the rubble. These early white pioneers saw the walls and thought of them in terms of their own experiences, particularly from the standpoint of defense against the Indians. Though they called them stone forts, these sites would be very poor places to carry on prolonged fights.
If a small band took refuge behind the wall, they might be pushed over the cliff by a larger attacking force. Or a larger force could lay siege to the place, and the band would be cut off from both food and water and soon starve to death. Although they called them "forts," many people did not accept such a theory, and speculation continued.
Archaeologists believe that particularly in Ohio, the Hopewellian Indians probably were responsible for some of the walls, but the identity is not known. These walls represent a major accomplishment for a people who had only primitive digging implements and methods of carrying or moving heavy stones. These unknown builders piled rock completely across summits, leaving inside enclosures sometimes as large as 50 acres, depending upon the size of the bluff.

Another fort built almost exactly as the Makanda Fort is the fort that lies southwest of Carrier Mills in Saline County. The old fort site is found four miles east of the present town of Stonefort in Williamson County and seven miles east of Creal Springs, Illinois. Its area is almost the same as Makanda's Fort and research into the Archivo General de Indias at Seville, Spain (the repository of extremely valuable archival documents illustrating the history of the Spanish Empire in the Americas) shows that such a fort was spoken of by DeSoto in 1542. 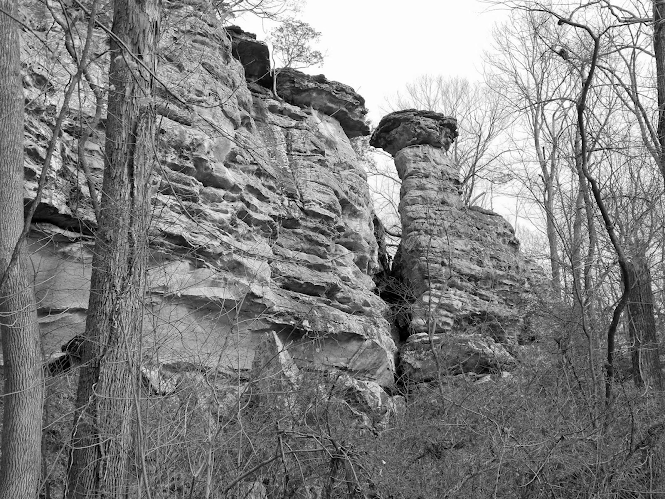 This old fort is on top of a hill, which is almost inaccessible. The walls are constructed of large stones and the whole reminds one of the ruins of a once well-constructed fortification. It has gone to ruin more or less within the past one or two years. The first house in the vicinity was one built in 1831 by J. Robinson. The village of Stonefort is situated atop a ridge that rises above the South Fork Saline River valley to the north and the Little Saline River valley to the south. The village of Stonefort was established in late 1858 and was originally located about a mile to the southeast, near the edge of the bluff. There were houses there earlier. 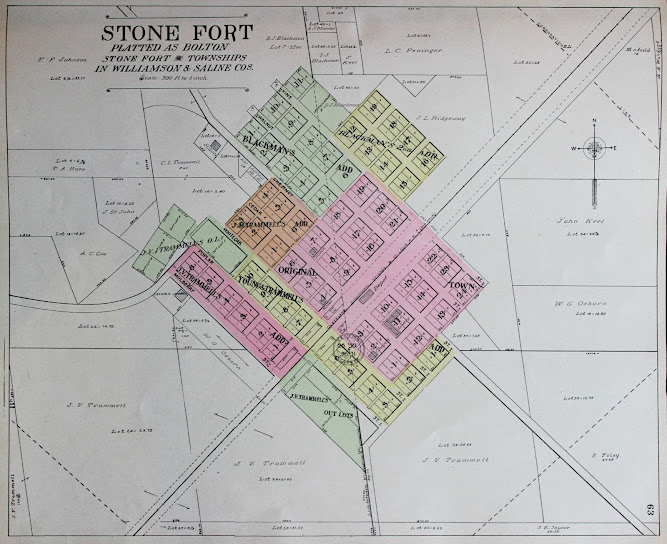 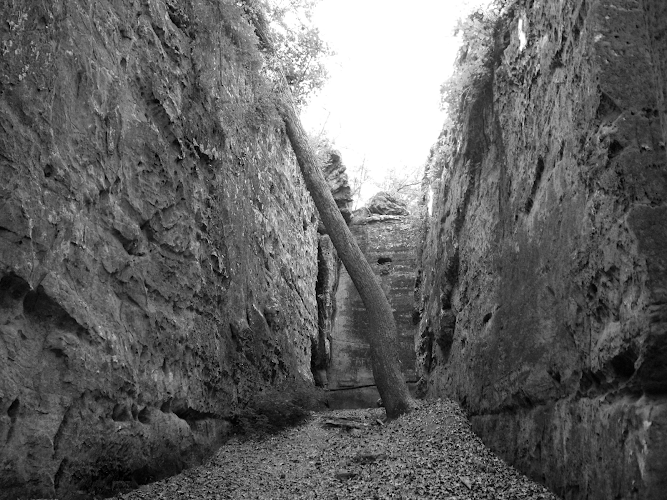 When the Cairo and Vincennes Railroad was completed through the area in the 1870s, Stonefort's public buildings were dismantled and moved to the village's present location, which was adjacent to the railroad tracks. The former site of the village is now listed as "Oldtown" on maps which is 1.8 miles northwest of Stonefort.
Compiled by Dr. Neil Gale, Ph.D.
Presented by Dr. Neil Gale, Ph.D. at 2/28/2021 03:24:00 PM