The History of the Family Owned Ashkenaz Restaurants and Delis of Chicago, Illinois. (1910-2012)

The Ashkenaz restaurant, at 1432 W. Morse Avenue in Rogers Park, was one of the authentic delis, serving Vienna corned beef, Rosen's rye bread, Litberg bagels, and Vita lox.
As you enter, there is a long delicatessen counter on the right filled with trays of amber smoked chubs, chopped chicken livers, potato salad, perogen (small baked pastries filled with chopped chicken livers and onion, etc.), gefilte fish, kishkes, and pickles. Gleaming red Vienna salamis hung from a rack on the wall. 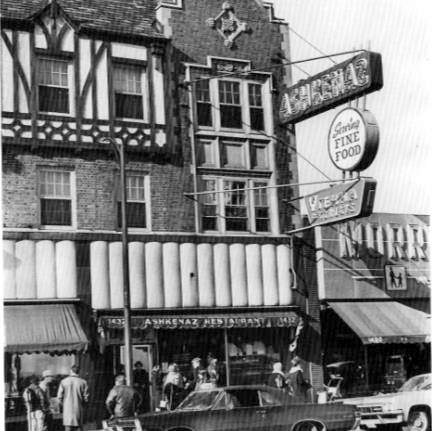 One wall of the restaurant is somber brown; the other is a mosaic of green, blue, and yellow tiles, an imitation ─ intentional or not ─ of the colors used by Marc Chagall in his evocative paintings of Jewish life in the villages of old Russia.

Beyond the counter in front is an open kitchen manned by four cooks who prepare short orders and sandwiches. The waitresses were blonde buxom and inured to the constant chirping: "Sweetie, how about another cuppa?"

A steady hum of conversation is assertive, argumentative, and studded with friendly insults and retorts. "When are you going to retire?" a customer asks of a cook working at the meat slicer. "When I have your money!" the cook shoots back. A portly man with a Nikon camera says thru a mouthful of sauerkraut: "Was I busy? Today I shot two weddings and a bar mitzvah." 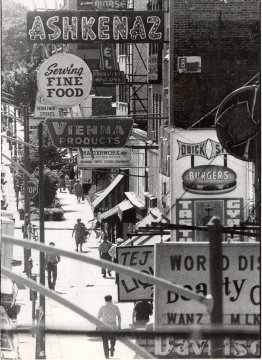 Meanwhile, everybody eats. Orders were ample, with the potato salad partly hiding the smoked fish and moderate prices. The Ashkenaz menu lists over 100 dishes, and 35 dinners are served weekly. Not all the items are Jewish cuisine ─ beef stew is listed next to gefilte fish, and barbecued spareribs next to stuffed kishkes with brown sauce.
sidebar

Comedian Shecky Greene was a once-famous son of the Rogers Park neighborhood. We know the true nature of Shecky Greene’s attachment to Ashkenaz and of the Shecky Greene sandwich because long-time New York Times sports writer Ira Berkow is also a native of the Morse Avenue neighborhood and wrote about it for the Tribune.

Berkow wrote,  "The Shecky Greene sandwich was named in his honor at Ashkenaz as the neighborhood's ultimate tribute to a local boy made good. The sandwich consisted of a double-decker of corned beef and egg, lettuce, tomato and a generous dollop of potato salad spilling onto the plate. That and their barbecue beef sandwich with the special Ashkenaz hot sauce that made you cross-eyed with the first taste were favorites in the mid-1950s."

At the counter's far end was an archway leading to a dining room served from a second kitchen in the rear. The atmosphere in the dining room is relaxed and casual, and the diners chat from table to table. The tone is that of a family gathering.

Sam Ashkenaz, the owner, had a gentle manner that masks his shrewd business ability. He looked and spoke somewhat like entertainer George Burns, with a raspy but soothing voice and a twinkling expression. It was often hard to tell whether he was serious. One of his favorite topics of conversation was the origin of the restaurant.

His parents, George and Ada Ashkenaz, immigrated from Russia early in the 1900s and first opened a small delicatessen store near Roosevelt and Karlov in 1910.
When the Jewish population moved north and west to the suburbs, the Ashkenaz family moved to Rogers Park, opening their first deli on Morse Avenue. It was a small restaurant, 10 by 30 feet or so, in which Ada Ashkenaz cooked in a tiny kitchen at the rear. During the mid-30s, they acquired a space at 1432 West Morse Avenue and opened a new restaurant. It burned in 1939, and the couple had no insurance.
Sam Ashkenaz graduated from Purdue that year with a degree in electrical engineering. He joined his parents to help recoup the loss, borrowed money from the restaurant's suppliers, fixed the restaurant and was back in business in 1940.
At Ashkenaz, a typical dinner may start with an appetizer such as chopped chicken livers, various kinds of herring, or a piece of small gefilte fish with red beet horseradish.
Next is chicken soup with matzo balls made entirely of matzo-meal dough or kreplach (a meat-filled dumpling for chicken soup). Chicken soup was served daily, and then there were the day's soups, such as barley, potato, bean, or cabbage ─ thick, rich, with a minimum of liquid. "We don't serve a cup of soup," said Sam Ashkenaz with contempt. "Ten-ounce bowl with the dinner, 12-ounce bowl a la carte."

The best-seller was Corned Beef and Pastrami sandwiches. They served up over a ½ ton (1,000 pounds) of Corned Beef per month.
The "Family Recipe" blintzes were a popular entree; a thin pancake rolled and filled with cheese topped with fresh fruit, meat-filled, or fruit-filled blintzes were invariably served with a decent dollop of sour cream.

Jewish cuisine reaches a hedonistic gastronomic status in its sweet and sour cooking of meats and fish, and one of Ashkenaz's specialties was sweet and sour pickled trout. Most pickled fish is cooked with lemon as the souring agent, but Ashkenaz has a secret souring ingredient that produces a more piquant flavor. Many housewives came to Ashkenaz and asked how the flavor of their pickled trout is derived but did he tell?

The restaurant had its own bakery, with a line of pastries that included an excellent cheesecake. A large deli in New York City, Reuben's, makes a cherry cheesecake that some Chicagoans ordered by mail.

Ashkenaz admits freely that Reuben's cheesecake is delicious, but he points out that it is heavy and difficult to eat after a good meal, while his cheesecake is lighter.

After sampling a slice, you'd have to agree with him. Ashkenaz's cheesecake was topped with a triumphal glace, the color of rubies, filled with fresh strawberries.

So what is a deli? It's a restaurant serving a great variety of foods with exotic flavors. Although it is Jewish, the food is derived from many European cultures. It isn't haute cuisine such as that created by French chefs like Escoffier; it is humble food ─ Jews who came here from Europe were poor.

But the food is prepared with loving care; its Escoffier was a formidable matriarch, the Jewish mother, who believed "Nobody should go away hungry." Is it possible that this type of restaurant, with its superior menu and vivacious atmosphere, is on the way out? You should live so long.

Ashkenaz Restaurant and Delicatessen was an institution that presided over Morse Avenue for years, within the shadow of the "L" tracks, until the late 1970s when they sold the Morse location.
Though there are different versions of why and how Sam Ashkenaz left the Morse location, he purposely moved the restaurant directly to the then brand-new Northbrook Court in 1976. That news made the Daily News Beeline column in December 1975. In fact, the once humble neighborhood Jewish restaurant was considered a real draw both by Northbrook Court and by what would be one of its more high-profile tenants. 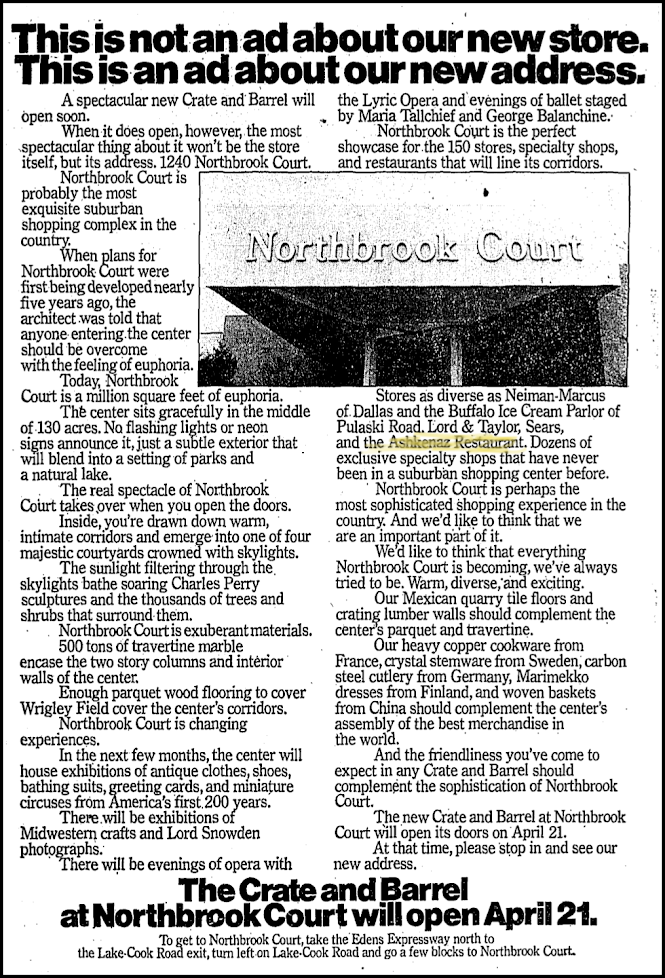 So, how long did Ashkenaz last at Northbrook Court? The trail abruptly ends in newspapers and on the internet, so I have no idea. It probably wasn't long since several people from the Northbrook area only slightly remembered that Ashkenaz was ever there. Sam Ashkenaz's son, Steve, worked at the local Carnegie Deli in 1990 and briefly at another deli that made the paper in 1989. Steve would have been at the family business if it were still around, so we can assume that Sam Ashkenaz's restaurant in Northbrook Court lasted about ten years or less.
After Ashkenaz left Morse Street, a place called "Ashkey's" replaced it, also serving Jewish deli food—apparently run by new people pirating the old name. A fire destroyed the building in 1978, ending Ashkey's, whoever owned it.

In the late-1970s, an Ashkenaz location would temporarily pop up in the North Shore suburb Wilmette at 3223 West Lake Street.
Sam Ashkenaz died on November 25, 1985, at 71 years old.

A short-lived location opened at 3223 West Lake Street, and another location at 12 East Cedar operated from about 1978 until 2012. However, those locations are always mentioned in newspapers as belonging to a corporation, and it's unclear if the Ashkenaz family ever owned either spot. But the Cedar location was open long enough—almost 35 years—to be called a "neighborhood staple."
sidebar

A Jewish resident in the Gold Coast neighborhood said that the first two calls you make when someone dies are to the decesed family and to Ashkenaz to order deli trays for shiva. That suggests both the overlooked deli’s importance to its neighborhood . . .  and why it closed, as its core clientele increasingly passed away.

Restauranteur Howard Cohan bought the business in 2005. It was so well known that, strangely, New York Magazine, of all places, noted its passing in 2012.
INDEX TO MY ILLINOIS AND CHICAGO FOOD & RESTAURANT ARTICLES.