The Stone Forts of Illinois.
One of the unique prehistoric phenomena of Southern Illinois is the ruins of stone walls which have traditionally been known as "stone forts." They appear in the rough east-west alignment across the hill country and appear to form a broken chain between the Ohio and Mississippi Rivers. These ruins have similar geographic site characteristics. They are generally located on bluffs, which are often finger-like promontories of land with steep cliffs on three sides and a gradual incline on the fourth. It was across these inclines leading to the top of the bluff that these stone walls are most generally located, hence the theory of a pound or game trap, has been advanced.
Many of the walls have long been torn down and removed for building purposes. Early settlers, in most instances, removed the better slab-like stones for building foundations, leaving only the rubble. These early white pioneers saw the walls and thought of them in terms of their own experiences, particularly from the standpoint of defense against the Indians. Though they called them stone forts, these sites would be very poor places to carry on prolonged fights.
If a small band took refuge behind the wall, they might be pushed over the cliff by a larger attacking force. Or a larger force could lay siege to the place, and the band would be cut off from both food and water and soon starve to death. Although they called them "forts," many people did not accept such a theory, and speculation continued.
Archaeologists believe that particularly in Ohio, the Hopewellian Indians probably were responsible for some of the walls, but the identity is not known. These walls represent a major accomplishment for a people who had only primitive digging implements and methods of carrying or moving heavy stones. These unknown builders piled rock completely across summits, leaving inside enclosures sometimes as large as 50 acres, depending upon the size of the bluff.

The Makanda Stone Fort is a quarter of a mile northeast of the village of Makanda, Jackson County, Illinois, and is a part of Giant City State Park.
About 1000 years ago, when Indian cultures were enjoying the area’s abundant resources (water, wildlife, nuts, berries, and roots) in the Shawnee National Forest, a stone fort was found. It is thought to have been built during the Late Woodland Period (1000 BC - 1000 AD), probably between 600 to 900 AD.
These prehistoric forts were constructed on a raised mass of land known as a promontory (a point of high land that juts out into a large body of water), while some others were built on hilltops that provided an excellent overlook giving them a vantage point to see for miles across Illinois' premier forest.
The massive stone wall was at one time 285 feet long, six feet high, and nine feet thick on 1.4 acres of land. The appearance of a “stone fort” or stone wall located in Giant City State Park, which is part of the Shawnee National Forest, sits atop a sloped ridge 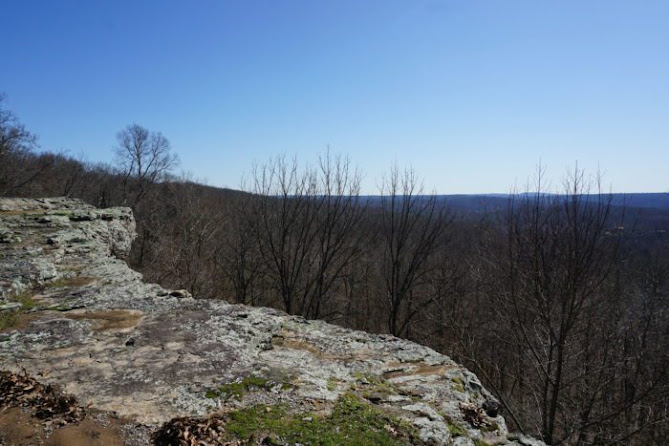 There are actually about ten of these old structures in the southern Illinois area, and they are believed to have been either a military fortification as a meeting place or a ceremonial temple.

Most of these sites were not habitation sites (villages) in the usual sense. There was only a modest amount of artifacts, which is common among places of sporadic use for short periods of time. Debris found on this site includes sherds of grit or grog-tempered cord-marked pottery and stone tools, like projectile points. Many Late Woodland tribes lived in large, intensively occupied villages located near major rivers and streams such as Cahokia and East St. Louis. They had a mixed economy of hunting, gathering, and cultivated a series of native plants like barley, sumpweed, maygrass, and squash. 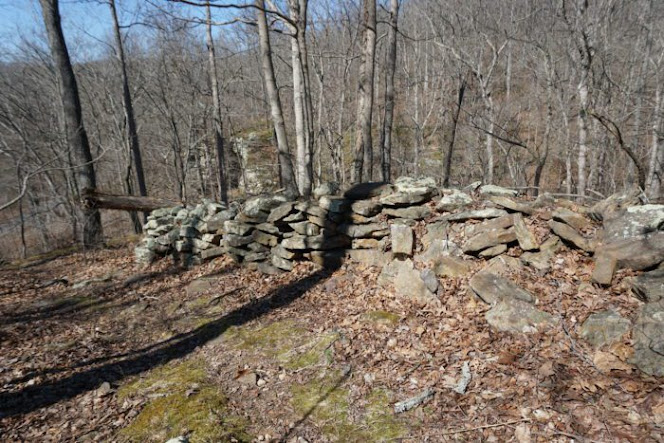 For years archaeologists have wondered about the stone fort’s usage. Some say that these were “sacred spaces” reserved for periodic activity. Archaeological digs have located items that prove that the Indians of Southern Illinois were part of an extensive trading network. They believe the trading network followed the trails in Southern Illinois that became the early pioneer roads centuries later. Archaeologists suggest the possibility that stone forts were designated areas where different tribes or sub-tribes could meet, socialize, and trade on neutral ground.

The original wall was dismantled by European settlers, who used the stones in order to build their own structures; the stone base is all that remains of the original wall. It was reconstructed in 1934 by the CCC (Civilian Conservation Corp) workforce gathered the scattered stone and rebuilt the wall in its original location, but has since fallen into ruins again. 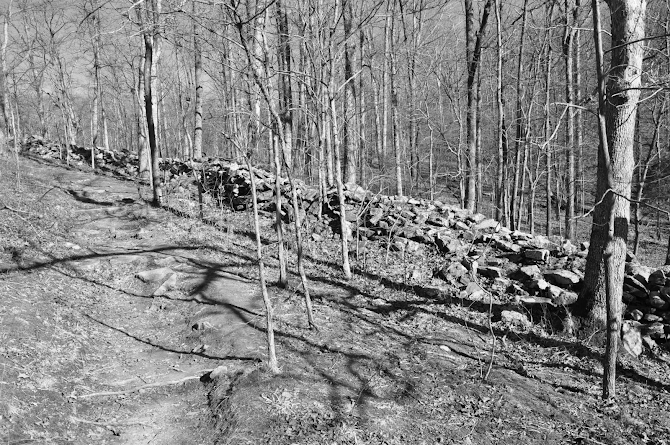 The location of this wall leads one to believe it was built for a fortification of some kind and as the building must have required a great deal of time and labor. It was surely built for more than just temporary use. The distance to the edge of the bluff in front is over 500 feet, thus affording room for quite a party taking refuge therein. The bluffs that form three sides of the enclosures are unscalable without the use of ropes and ladders except in two places, and these are easily protected from above for they are just narrow crevices up which one could, with difficulty, climb and then only by the aid of the jagged edges of the protruding rocks. One man could lie behind boulders at either place and easily protect it against a number of his enemies with crude stone-age weapons, traces of which were found everywhere in the vicinity and all through this section. Several pieces of flint and arrowheads have been picked up on the top of the bluff.
Another reason for believing that this fortification was built as a defense against tribesmen is that it is at the upper end of the valley where the opposite bluff is not over 200 yards distant, and is higher, though not so precipitous. From this bluff, one with a rifle could easily shoot into the fort, but with bows and arrows, very little damage could be done. In fact, it is by far the best location in the valley. Water is easily accessible and flows from a little stream within 100 feet of the cliff where it is scalable and at several places in the brooks are springs.
Ancient features more closely related to a seasonal hunting camp where hunters would take advantage of game resources, then move on.
Other theories included the notion it was actually early European explorers, such as DeSoto, who created the rock fortresses while making inroads to conquer the land. No such evidence of European construction exists, of course.
The oldest settlers in Jackson County say that the area was covered with bushes when they first came here. No one knows the early history of the fort as a certainty and there is little likelihood of it ever coming to light. Parts of the wall of this fort were standing as late as 1870 and were torn down by a Doctor CalIon in hunting for relics. None were found which is more strong evidence that the fort was built by someone other than Indians. George W. Owens, still living in 1931, who came to Makanda in 1862, tells of a small, one-pounder cannon that was found in the wall of the old fort. It was used in Fourth-of-July celebrations around Makanda for 50 years and finally sold to a junk dealer. The French Lieutenant Aubrey, passed this way from Kaskaskia in 1720 with 30 French and 300 Indians on his way to Fort Massac on the Ohio River to thwart the English, who were reported to be on their way down the Ohio River toward Kaskaskia. Aubrey had three brass cannons of this description. This may have been one of them. 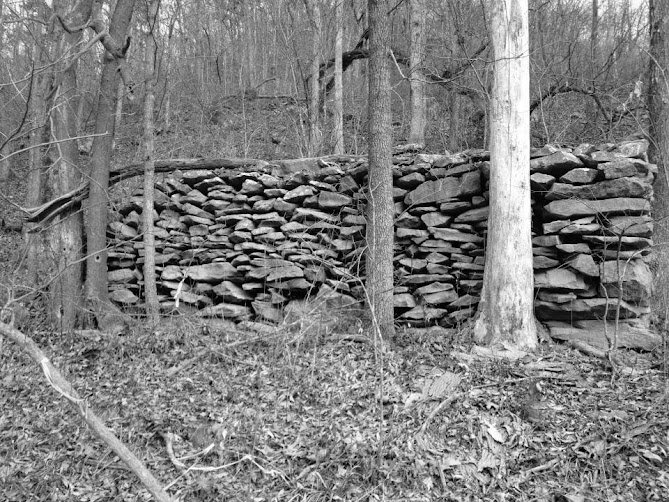 The first professional archaeological investigation of the fort site was conducted in 1956 by archaeologists from Southern Illinois University. An explanation for the large hole in the front of the wall is unknown, although it most likely represents the work of treasure hunters. The hole was there when the site was officially recorded as an archaeological site in 1956. 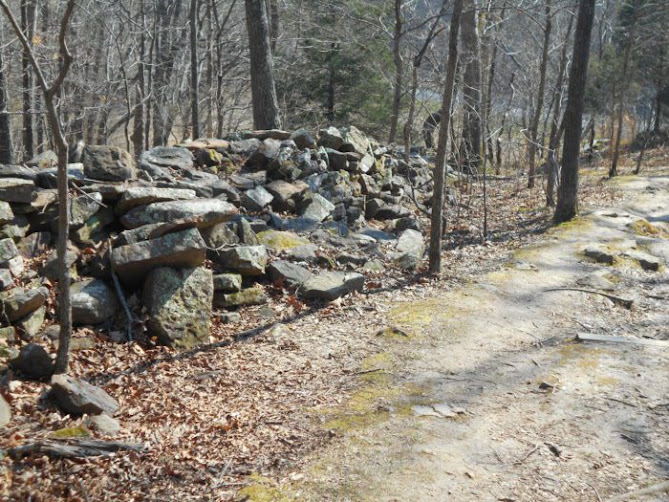 In the fall of 2000, archaeologists from Southern Illinois University Carbondale conducted an investigation of the Stone Fort site. Of the 153 shovel tests executed south of the wall, all were positive for prehistoric artifacts. This led the scientists to nominate Giant City’s Stone Fort for the National Register of Historic Places. The Giant City Stone Fort Site was listed on the National Register of Historic Places on August 9, 2002 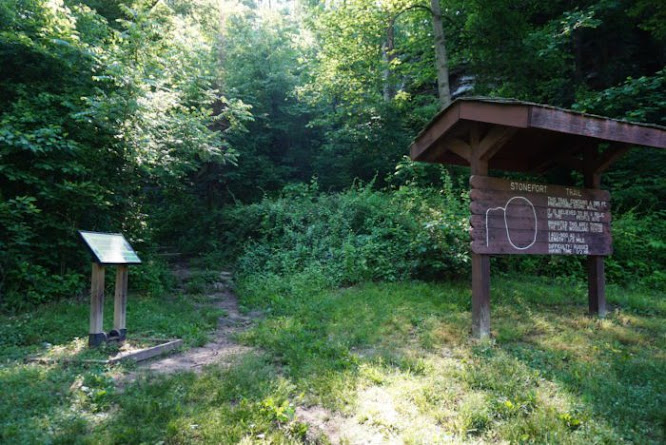