Is There Proof That Abraham Lincoln Had Marfan Syndrome? 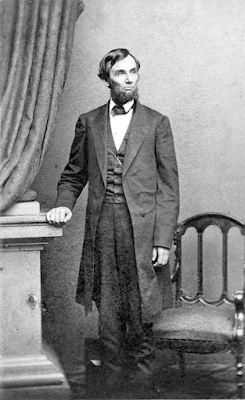 The iconic image of Abraham Lincoln is ubiquitous in our lives, from his small face on the penny to his large figure looming over the National Mall in Washington, D.C. Lincoln fascinates historians because of his significant role in American history when our nation was bitterly divided, but he intrigues physicians because of his remarkable stature. A reporter once described the 16th president as a “tall, lank, lean man considerably over six feet in height with stooping shoulders, long pendulous arms terminating in hands of extraordinary dimensions, which, however, were far exceeded in proportion by his feet.” The president’s strikingly tall and lanky build, his long, thin face, and especially his enormous hands and feet first sparked the notion that Lincoln might have had Marfan syndrome.
Geneticists and historians have debated this idea since it was first proposed in the early 1960s.
Marfan syndrome is a rare inherited disorder affecting connective tissue and the heart, eyes, blood vessels, and bones. People with Marfan syndrome are tall and thin with long arms, legs, fingers, and toes. Treatment includes medications to keep blood pressure low, eyeglasses, and surgery.
As a 10-year-old boy, Abe was kicked in the left forehead above the eye by a horse. Could this incident have exacerbated Marfan Syndrome? Did it contribute to his lifetime melancholy and overlap some of the Marfan effects?
In 1896, Antoine-Bernard Marfan, a French pediatrician, described a hereditary (transmitted or transmittable from parent to offspring) disorder of connective tissue that was to become known as Marfan syndrome,
The incidence of Marfan syndrome is estimated to be fewer than 200,000 cases per year, or 0.06% of the U.S. population. It is passed in an autosomal dominant fashion in families or is caused by de novo mutations. These mutations occur in the extracellular matrix protein Fibrillin-1 [1] and affect the connective tissue. The disorder manifests in multiple body systems, most predominantly the skeletal, ocular, and cardiovascular systems. Patients may have an overgrowth of the long bones, long fingers, loose joints, dislocation of the ocular lens, early myopia, and thickening of the heart valves leading to mitral valve prolapse and variable degrees of valve regurgitation. The most life-threatening manifestations of the disorder are aortic aneurysm and dissection, but improved recognition and treatment of these outcomes have made life expectancy in Marfan syndrome nearly normal.
In 1962, Dr. A.M. Gordon, a Cincinnati physician, was the first to suggest that Lincoln had Marfan syndrome based on the president’s physical appearance and the similarly tall and lanky appearance of Nancy Hanks Lincoln, his mother.
Two years later, a cardiologist from California named Harold Schwartz published an article describing a 7-year-old patient with Marfan syndrome whose ancestry he traced back to Lincoln’s great-great-grandfather, Mordecai Lincoln II (1686-1736).
A debate about the president and Marfan syndrome in the form of letters to the editor of the Journal of the American Medical Association (JAMA) ensued in 1964. Gordon and Schwartz supported the diagnosis based on Lincoln’s skeletal structure but argued over whether he inherited the mutation from his mother or from his father.
In the same debate, Dr. J. Willard Montgomery denied that Lincoln had Marfan syndrome at all based on the president’s strength and athletic prowess. Schwartz again contributed to the debate in 1972 using an anecdote about a photograph of the president.
Lincoln reportedly made an observation that the foot of his crossed leg appeared blurry in the photograph, and a newspaperman named Noah Brooks suggested that the throbbing of the arteries might have caused the motion in the president’s leg. Lincoln tested the idea by crossing his legs and, upon watching his crossed foot, exclaimed, “That’s it! That’s it! Now that’s very curious, isn’t it?” Schwartz argued that the blurriness of the foot was due to pulsations of the large arteries associated with aortic insufficiency, a defect found in Marfan syndrome.

Despite the impressive evidence of Marfan syndrome features in the president, Lincoln was not known to be loose-jointed, he was never known to have a heart murmur, there was no mention of aortic abnormalities at his autopsy, and he was not known to have the ocular abnormalities associated with Marfan syndrome. For these reasons, many scientists have called into question the diagnosis of Marfan in the president.
In a recent article, Dr. John Sotos, a cardiologist with an interest in the medical history of America’s presidents, proposes a new theory on the president’s genetics in the context of newly discovered Marfanoid syndromes with mutations in the transforming growth factor-beta receptor. One such syndrome is multiple endocrine neoplasia type 2B (MEN2B) [2], which is a cancer syndrome characterized by mucosal neuromas, medullary thyroid cancer, pheochromocytoma, and marfanoid habitus. Dr. Sotos uses information about the appearance of Lincoln’s mother, Nancy Hanks Lincoln, to propose that Nancy and Abraham both suffered from the same Marfanoid disorder and that this disorder may have been MEN2B. According to an Indiana minister who knew several of Lincoln’s cousins, Nancy was “quite tall… bony, angular, lean… She had long arms, large head, with the forehead exceedingly broad… with chest sunken.” Nancy and Abraham shared many of the same facial features common to marfanoid facies (the appearance of facial expression of an individual type of a particular disease or condition), including a thin face and prominent chin. The two may have also had skeletal muscle hypotonia leading to their melancholic expressions. Muscular hypotonia, which is distinguished from weakness, is a prominent feature of MEN2B. Nancy died at age 34, and her death was described as a “wasting death,” which may be an indication of a cancer syndrome. Sotos concludes that all of these elements of Nancy’s history support a diagnosis of MEN2B cancer syndrome, but we will never be able to prove this diagnosis without testing her DNA.
The testing of Lincoln’s DNA was suggested and disputed in the 1990s after scientists identified the gene for Marfan syndrome. It would be possible to test several objects containing Lincoln’s DNA from the night of his assassination, including the bloody shirt cuffs of a young surgeon on the scene, the pistol ball that lodged behind his right eye, locks of hair, and even small fragments of the president’s skull. A committee of geneticists, forensic scientists, and lawyers convened in 1991 to decide whether or not to test Lincoln’s DNA for a mutation in Fibrillin-1.
The most important ethical question they encountered was whether or not this testing would be a violation of Lincoln’s privacy. The compelling reason the committee found to test the DNA was for the betterment of the community of disabled individuals, especially those with Marfan syndrome, who would be encouraged to learn that one of the most significant figures in American history lived with a genetic disorder. No member of the committee knew what Lincoln would have wanted, but they felt confident that Lincoln would have supported the testing of his DNA if it was helpful to others. Ultimately, the committee decided against testing Lincoln’s DNA for Marfan syndrome, not because it was a violation of his privacy, but because it would be too technically difficult given the number of mutations found in Marfan family ancestors.
Without DNA testing, we may never know whether Lincoln carried the mutation in his genes. From the extensive research of historians and geneticists, it now seems less likely that the president had Marfan syndrome and more probable that he had some other marfanoid syndrome, possibly MEN2B. More importantly, we can confidently surmise that Lincoln did have a genetic disorder passed to him in an autosomal dominant fashion from his mother. According to Dr. Sotos, “Nancy and Abraham had an almost perfect concordance for a large number of unusual craniofacial and marfanoid skeletal features…there can be little doubt that Nancy had the same marfanoid disorder–whatever it was–as her son.” The discovery of Lincoln’s likely genetic disorder is particularly significant to those with marfanoid syndromes. One patient with Marfan said, “The fact that Lincoln may have had Marfan syndrome shows those of us that we too can contribute something of value to society… It’s time that all people, especially medical ethicists, realize that having Marfan syndrome is not shameful. It’s just darned inconvenient.” The community of patients with genetic disorders can now be assured that the well-respected figure, whose iconic face is carved into Mt. Rushmore, almost certainly had a genetic mutation, and it did not hinder his many achievements. 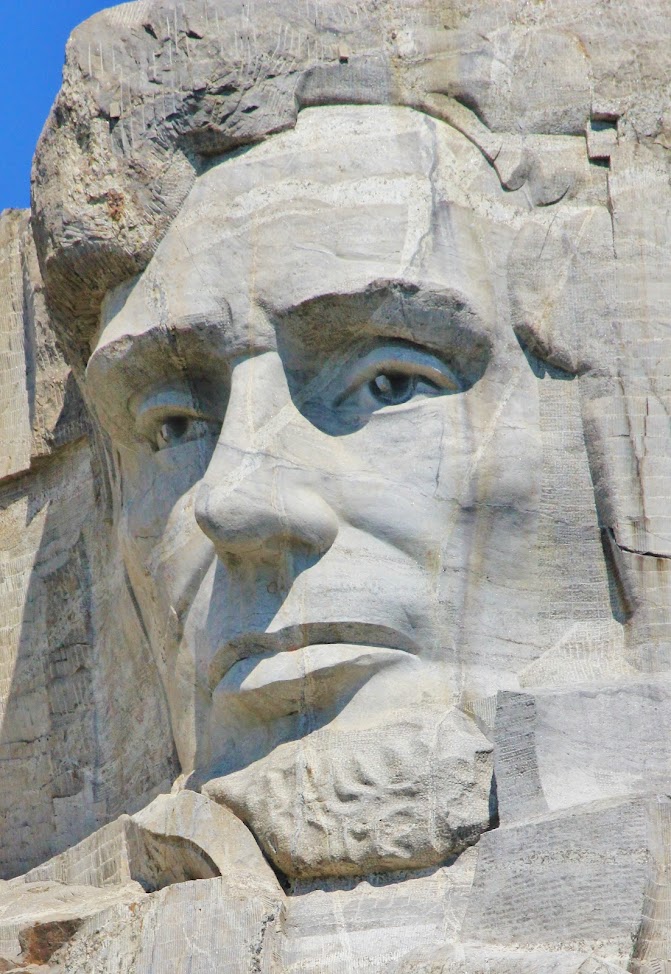 Compiled by Dr. Neil Gale, Ph.D.
Contributor Anna Krigel
[1] Fibrillin-1 is an extracellular matrix glycoprotein that serves as a structural component of calcium-binding microfibrils.
[2] MEN2B Syndrome is a rare genetic disorder that affects the endocrine glands and causes a type of thyroid cancer called medullary thyroid cancer, pheochromocytoma, and parathyroid gland cancer. It may also cause benign (noncancerous) tumors in the adrenal glands and growths around the nerves in the lips, tongue, lining of the mouth, and eyelids.
Gastrointestinal symptoms and trouble with the spine or bones in the feet and thighs may also occur. MEN2B syndrome is caused by a mutation (change) in a gene called RET. Also called MEN2B, multiple endocrine adenomatosis type 2B, and multiple endocrine neoplasia type 2B syndrome.
Presented by Dr. Neil Gale, Ph.D. at 11/12/2020 09:01:00 PM