The History of the Mary E. McDowell Settlement House in Chicago, Illinois.

Mary McDowell's (1854-1936) abolitionist father, Malcolm McDowell, brought the family from Cincinnati to Chicago after the Civil War, arriving in Chicago in 1870. At the time of the Great Chicago Fire in 1871 (Mary was 17), her father, though ill himself, consented to her taking their horse and wagon out to help rescue fleeing citizens and some of their possessions.
The governor of Ohio, Rutherford B. Hayes, an old friend of the McDowells, was one of the first to rush aid to the stricken city and, of course, he sent it to the home of the McDowells for distribution. Mary worked unceasingly in those first days after the fire before central relief forces were organized and helped form the “Relief and Aid Society,” from which United Charities of Chicago later emerged. Another organization was distributing, en masse, Chicago Shelter Cottages, kit houses (short-term housing) for 1871 Fire Victims nearly days after the fire.
When Rutherford Hayes became president, Mary was invited to spend a month at the White House and later spent a summer in California with her uncle, Major General McDowell. In the early 1880s, her family moved to Evanston, Illinois, a very Methodist suburb at the time.

There Mary became a friend and follower of Frances Willard, founder of the Woman’s Christian Temperance Union, which advocated the right of women to vote. After graduating from the National Kindergarten College and teaching for a private family in New York, she returned to Evanston in 1890.

Her interest in the social experiment, which Jane Addams and Ellen Gates Starr began in General Hull’s old mansion in Chicago, led her to help found such an experiment in Evanston, the Northwestern University Settlement.
Soon thereafter, she lived at Hull House as one of the first kindergarten workers until her mother's illness called her back to her family (she was one of six children) in Evanston. In the meantime, a new University of Chicago was being established, and members of its faculty transformed an association called the Christian Union, determined to learn the causes of this pervasive unrest and, at the same time, to minister to the needs of a neighborhood in the mode of Hull House. It was agreed that the district was called "Packingtown," just in the back of the Union Stock Yards (now the Back of the Yards neighborhood), which was the scene of bloodshed and rioting during the 1894 strike, was greatly in need of such a center.

At the recommendation of Jane Addams, Mary McDowell, then 40 years old, was invited to take charge of the new house. In November 1894, she settled in a building in the heart of a most difficult, transient area, in four small rooms, in a tenement on Gross Avenue (now McDowell Avenue) and she began to live there as a neighbor to the workers of Packingtown.
By 1906, the Settlement House had moved to a new building on the same block, which remained its home for some 60 years. By the 1930s, the site contained 45,000 square feet in a central, four-story building. It included a boxing room, five club rooms, a game room, junior and senior girl's rooms, a library, manual training and sewing areas, a music room, nursery, showers, and two play lots-one on the roof. 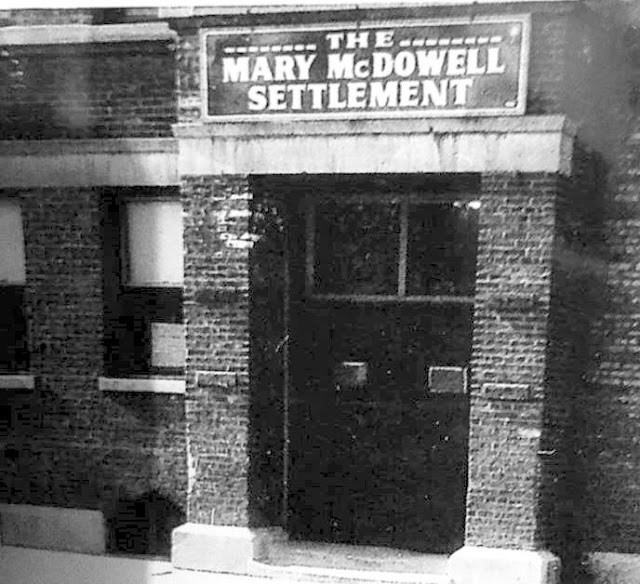 Eventually, there were two gymnasiums, one for boys and one for girls, and a visiting nurse program. The residents worked with those of all ages–from infants in the nursery to senior citizens. Most attention went to the children; having children at the Settlement house meant that parents would come too. The Mothers’ Club was an active organization for many years. Older children took classes in woodworking, manual training (for the boys), cooking and sewing (for the girls) and arts and crafts (for both). Some children had their own plots of land and learned to keep a garden. Once a week there was a show produced by the youngsters. Settlement house clubs participated in sports and other activities with the many ethnic, Parish-sponsored social and athletic clubs.

In 1900, the city built the William Mavor Bathhouse (named after a Chicago alderman) at 4645 Gross (later McDowell) Avenue under the prodding of Mary McDowell and the Settlement House Women’s Club. The alderman who finally was moved to facilitate its building was so convinced of the potential political power of Mary McDowell that he had to be dissuaded from naming it the “Mary McDowell Municipal Bathhouse.” 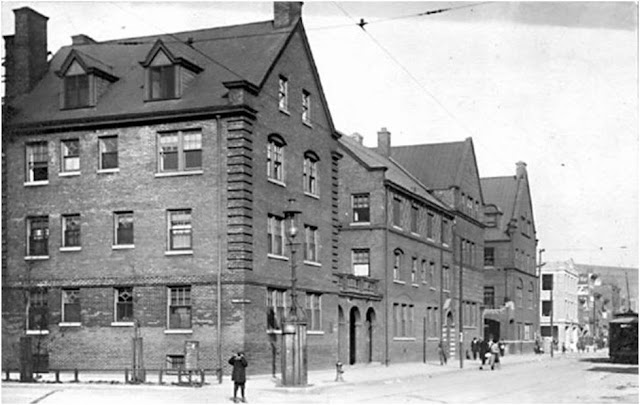 Sometimes called the "Angel of the Stockyards," Mary McDowell preferred to think of herself as a concerned citizen. She reached out from that base to promote trade unionism, safer working conditions, woman suffrage, inter-racial understanding, and reforms in municipal waste disposal. 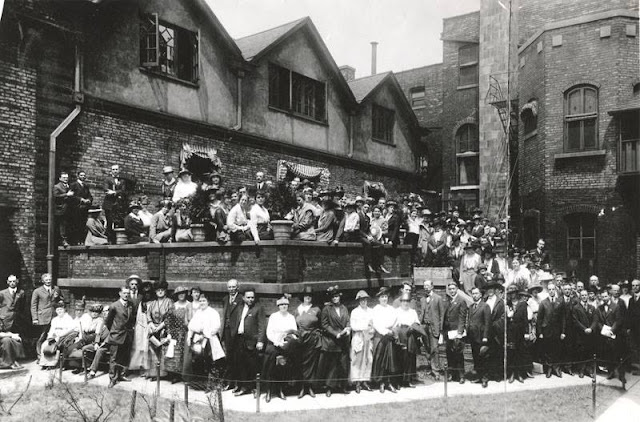 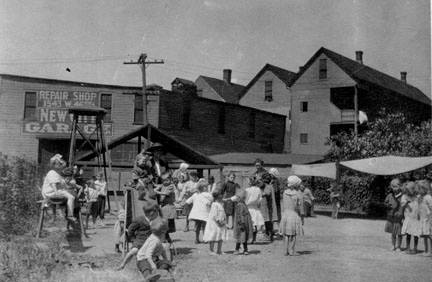 While representing the union at the 1903 American Federation of Labor convention, she joined with others to establish a National Women's Trade Union League, to which she was elected as its first president. As the first president of the Illinois branch of the WTUL, she recruited glove-maker Agnes Nestor and boot and shoe worker Mary Anderson into the battle for shorter hours for factory women in Illinois. McDowell also persuaded President Theodore Roosevelt to authorize the first federal investigation of working conditions and wages for women and children in the industry.  President Theodore Roosevelt and Congress authorized $300,000 to study women in the workplace. This landmark study took four years and filled 19 volumes!

In 1923, reform Mayor William E. Dever appointed Mary McDowell Commissioner of the Department of Public Welfare (a department created in 1914, mainly through the efforts of Charles Merriam, alderman and UC professor), which consisted of a Bureau of Employment and a Bureau of Social Surveys. In 1921, the City Council had been ready to abolish the department saying it was ‘the most useless on the city payroll.’ The Chicago Tribune, on June 27th, 1923, quoted an alderman, after some argument, as proposing: “Let’s give Miss McDowell this one opportunity to work out some of her plans, and if she fails, then we’ll repeal the act which created her position.” She was commissioned, and the department really began to serve the city and its citizens. 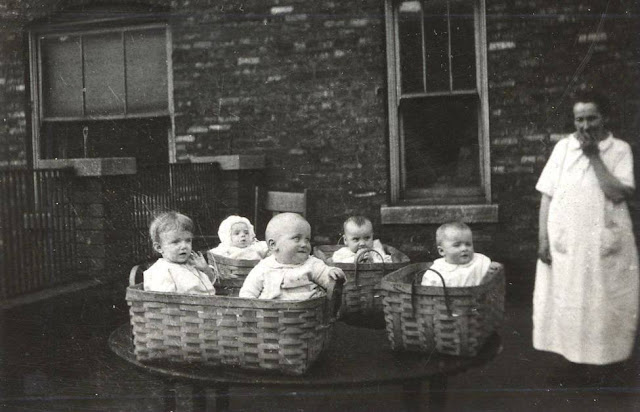 Mary McDowell had campaigned for Women’s Suffrage, World Peace, better schools, improved health care, and honest government for the day, as she wrote, “When wage-earners would have a decent American standard of living.”

She had moved in prestigious circles too and sought the help of those in power for her many causes-for, for those in need, whom she considered her friends and neighbors. She had asked the questions and set up the procedures whereby accurate information could be assimilated and used. And she was years ahead of most of her fellow citizens regarding race relations. Her diligent work in the Settlement House, in Packingtown, in the city, and far beyond had bettered the life of countless people.
Mary McDowell retired at the age of 75 in 1929 and died at 82 in 1936. The University Settlement was renamed The Mary McDowell Settlement in 1956 in her honor. It was put under the wing of Chicago Commons in 1967, and the old settlement house buildings were torn down in the early 1970s.
The Mary E. McDowell School, 1419 East 89th Street, Chicago (Pre-K-5), was McDowell's namesake.

Email ThisBlogThis!Share to TwitterShare to FacebookShare to Pinterest
Living History of Illinois and Chicago® Charity, Chicago, Education, Women of Influence