As the real story is told: By 1890, Marshall Field's had established itself as a place where ladies were welcome to congregate. But there was just one thing missing: food. That's when Mrs. Sarah Hering came along. An enterprising clerk in the State Street millinery (hat) department, she had been trained in Field's "give the ladies what she wants" tradition of customer service. When she overheard two customers grumbling that they had nowhere to eat, she thought nothing of offering them the homemade chicken pot pie she had brought for lunch. She set up a table, served up her pie, and, without knowing it, started a restaurant - and a revolution. The ladies were so grateful that they convinced Mrs. Hering to make more pies for the next day telling her that they would bring friends to lunch and view the latest in hats the next day. 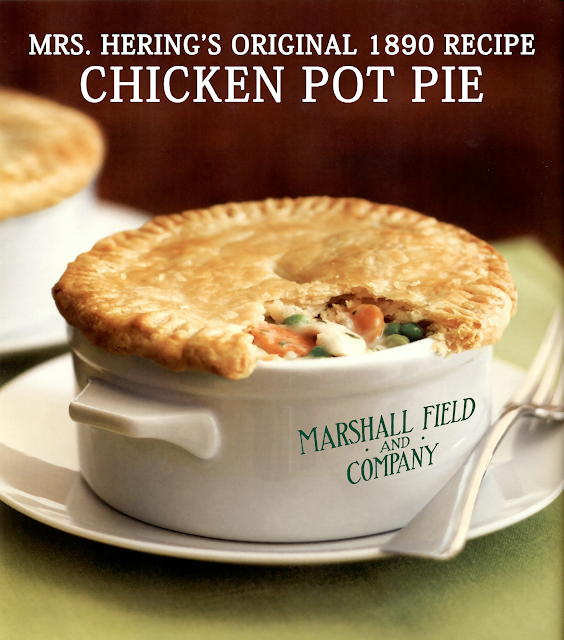 These ladies spread the word about the tastiest chicken pot pie they'd ever eaten, and soon Mrs. Hering was selling her pies at a counter in the millinery department. A young manager named Harry Selfridge (who would go on to found Selfridges Department Store in London, modeling it after Field's) was quick to recognize the potential of serving food to hungry guests, and thus keeping them in the store for more shopping. So he persuaded Mr. Field to try out the idea by opening a small tearoom in the building. On April 15, 1890, fifteen tables were set up on the third floor. There were eight waitresses and four cooks.
Each table was set with the finest silver tea service and every plate was adorned with a red rose. That day, fifty-six women turned up to lunch on corned beef hash, chicken salad, orange punch in an orange shell, and, of course, Mrs. Hering's chicken pot pies. Selfridge's hunch paid off. "The South Tearoom," now managed by Sarah Haring, became the world's full-service dining establishment within a department store and was a runaway hit. It quickly expanded and within a year was serving fifteen hundred guests a day. In the tradition of Mrs. Hering, many of the cooks in those early days prepared their specialties - from codfish cakes to Boston baked beans - in their own home kitchens and brought them in each morning.

In 1893 the South Tearoom was expanded to the entire 4th floor in the oldest section (Washington & Wabash) of the building – just in time for the 1893 World's Columbian Exposition, which Marshall Field was a major sponsor of the 1893 World's Columbian Exposition. The tearoom then served 1,500 people per day.
When it moved to its current location on the seventh floor, the tearoom expanded to seventeen thousand square feet. It took its new name from the Circassisn walnut that was imported from Russia to panel the walls. The newly rebuilt south building that houses the Walnut Room today at Washington & State opened in September 1907.

While not the first restaurant in a department store (as the misinformation on the Internet claims), it was the first elegant, full-service dining establishment within a department store and its also the longest continuously-operating restaurant in the nation. It's been reported that the Walnut Room alone served up an average of 600 pot pies per day. Mrs. Hering's famous Chicken Pot Pie is iconic to the Walnut Room in Chicago.

About women dining unescorted by a man: Until about the 1920s it was unacceptable for a lady to dine unescorted while out in public. If a woman got a little peckish while shopping, she would need to return home to grab a snack. Before the Civil War, a space called a “Ladies Ordinary” was set aside for women in hotels. This, it was often stated, was to protect “respectable” women from being accosted or harassed by men or, even worse, taken for easily available women by male travelers, loungers, and dubious characters.  Beginning not long before the Civil War, restaurants started to cater to female shoppers who wanted lunch. Establishments called “Ice Cream Saloons” opened up near dry-goods emporia and the first department stores. They offered ice-cream, which was thought to appeal to women, as well as light meals. A key element of their efforts to attract women was that they did not serve alcohol. By 1900, coffee shops, tea-rooms, department store restaurants, and chain restaurants had a predominantly female clientele. Men might lunch at bars that offered “free lunch” with the purchase of drinks, at grills, clubs or at fancy restaurants. By the 1920s, most restaurants gave up the idea that they were protecting morals.


NOTE: This recipe, from the Marshall Field's Culinary Council, was recalculated for 6 servings, using modern measurements, and I noted the modern-day substitutions. The original recipe made 50+ servings per batch.

TO PREPARE THE CHICKEN/BROTH:
Combine chicken, carrot, celery, onion, and salt in a large stockpot. Add cold water just to cover and bring to a boil over high heat. Decrease the heat to low and simmer 45 minutes. Transfer chicken to a plate and allow to cool.

Increase the heat to high and bring to a boil for 20 minutes to concentrate the broth. Pass the broth through a fine-mesh strainer and discard the vegetables. When cool enough to handle, pull the chicken meat from the bones and shred into bite-sized pieces.

TO PREPARE THE DOUGH:
Combine flour, salt, and butter in the bowl of a food processor and pulse 5 times to combine. Add the shortening and pulse a few more times, until dough resembles coarse cornmeal.
{{If you want, you can combine ingredients using a food mill or with a wooden spoon like in 1890.}}

Transfer to a bowl and sprinkle with 2 1/2 to 3 tablespoons of ice water. Stir and then press together with a wooden spoon until the dough sticks together. A little at a time, add more water if the dough won't come together. Shape dough into a ball and then flatten into a disk. Cover in plastic wrap and refrigerate for 30 minutes or up to 2 days before rolling.

TO PREPARE THE FILLING:
Preheat oven to 400° degrees Fahrenheit.

Place a large saucepan over medium heat and add butter. When the butter is melted, add the onion, carrots, and celery for filling and cook, stirring occasionally, for 10 minutes until the onion is soft and translucent.

Add the flour and cook, stirring, for 1 minute.

Slowly whisk in the milk and 2 1/2 cups of the chicken broth. Decrease the heat to low and simmer, stirring often, for 10 minutes.

Place the dough on a floured surface and roll out to 1/4 inch thick. Cut into 6 rounds about 1 inch larger than the dish circumference. Lay a dough round over each pot pie filling. Tuck the overhanging dough back under itself and flute the edges with a fork. Cut a 1-inch slit in the top of each pie. Brush tops of pies with egg wash. Line a baking sheet with aluminum foil.

Place pies on the baking sheet and bake 25 minutes, until pastry is golden and filling is bubbling. Serve hot.