By the late 1800s, personal cleanliness had become a cultural norm for Americans, necessary for social acceptance, symbolic of good character, and essential for protecting public health from infectious diseases. 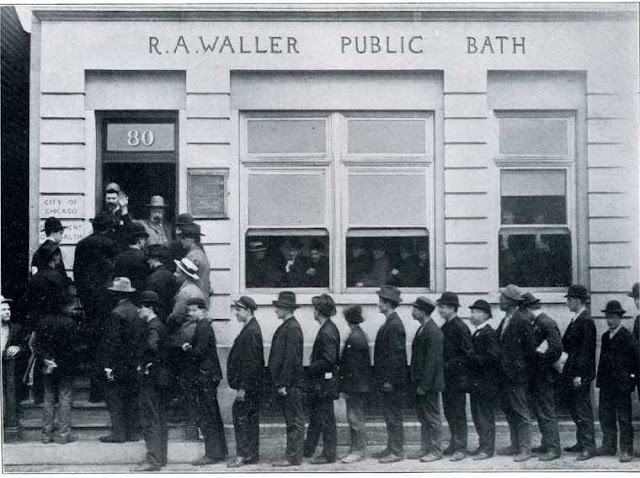 Without bathing facilities in their homes, the urban poor and working class could not conform to this cleanliness standard. During the Progressive era, reformers urged city governments to build public baths for the poor. Chicago's government responded by building 21 small, utilitarian public bathhouses in poor and immigrant neighborhoods between 1894 and 1918.

A women's reform organization in Chicago, the Municipal Order League (later renamed the Free Bath and Sanitary League), led the campaign for public baths. Three women physicians, Gertrude Gail Wellington, Sarah Hackett Stevenson, and Julia R. Lowe, headed the crusade. Beginning in 1892, Wellington led the effort, utilizing the network of women reformers in Chicago centering in the settlement houses, especially Jane Addams's Hull House, the Chicago Woman's Club and the Fortnightly Club. These women gained support for the cause of public baths from the press and the city government under Mayor Hempstead Washburne and city council finance committee chairman Martin Madden. Chicago's first public bath, located at 192 Mather Street, near Hull House on the Near West Side, opened in 1894. It was named after the assassination of mayor Carter H. Harrison and cost $20,649. After that, Chicago public baths were generally named after prominent local citizens.


Although some American cities built elaborate, monumental, and expensive public baths, Chicago conformed to the bath reformers' ideal that public bathhouses should be modest, unpretentious, strictly functional, accessible, and located in poor and immigrant neighborhoods readily accessible to bathers. Chicago's bathhouses generally contained between 20 and 40 showers, attached dressing rooms, and a waiting room. There were no separate sections for men and women; two days a week were reserved for women, girls, and small children with their mothers. Bath patrons did not control water or temperature, which were regulated by an attendant who turned on the shower for 7 to 8 of the 20 minutes allowed for a bath. 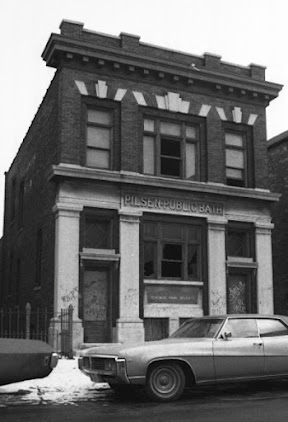 Pilsen Public Bath                                        Ogden Public Bath
Despite this functional emphasis, bath patrons utilized public baths more to cool off in the summer than to bathe in the winter. Additionally, utilization of public baths began to decline even as the city opened new baths. Peak attendance was reached in 1910 when a total of 1,070,565 baths were taken in the 15 bathhouses in operation; by 1918, when 21 bathhouses were open, utilization had declined to 709,452 baths. The opening of bathing beaches and swimming pools in the early 1900s and housing reform laws that required private toilets in apartments (many landlords added bathtubs as well) contributed to the decline in public bath usage.

Negro Owned Bathhouses and Baths.
Middle-aged civic activist Lewis Isbel's (1818-1905) journey from obscurity to celebrity mirrored the possibilities for Negroes of the frontier age. When he first arrived, he worked in primitive conditions on Clark Street between Lake and Randolph. Soon he struck out on his own and established a shop in Frink and Walker’s Stage office at Lake and Dearborn, opposite the popular accommodations offered at the Tremont House.
Early in the 1840s, he moved again to an alley location north of the Sherman House Hotel. With a growing clientele with constant tonsorial needs (a word that describes the work of those who give shaves and haircuts), Isbel secured space within the Sherman House itself, offering what he described as the town’s first combination barbershop and bathhouse. Lewis Isbel owned and operated two of the three bathhouses in the city by 1842, one with a section for women.
At an Emancipation Day celebration, Barber Lewis Isbel fell victim to a white pickpocket. After catching the perpetrator, Isbel suffered insult after injury when his testimony against the white man was disallowed in court by the provisions of the black laws that forbade Negro testimony against whites.
Settlement houses, for example, often provided limited bathing facilities for the neighborhoods they served. This was true of Hull House and the University of Chicago Settlement House. Chicago built simple bathhouses with shower baths and little else. Chicago opened its first year-round bath in 1894. By 1920, Chicago had built 21 bathhouses in poor and working-class districts.
After World War II, Chicago began to close down its public bathhouses. By the 1970s, only one bathhouse remained open to serve Skid Row (SRO; single-room occupancy) residents, which also closed in 1979.