Ordinances of the Town of Chicago which incorporated on August 12, 1833.

The Chicago Fire Department was originally formed as the "Washington Volunteers Fire Company" in 1832. The first bucket brigade was formed in 1835 as the "Fire Guards Bucket Company." Also, In 1835, the "Pioneer Hook & Ladder Company № 1" and the "Engine Company № 1" were also organized.

The following ordinances are those passed by the trustees, presented in summary language and in chronological order. 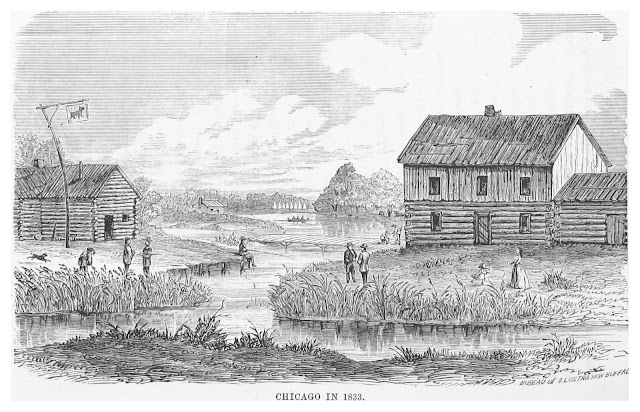 Passed November 7, 1833:
[1] Defines town limits: Jefferson St. on the W; Ohio St. [and both eastern and western projections thereof] on the N; Lake Shore and Fort Dearborn Reservation.
[2] Names four streets S of Washington St.: Madison, Monroe, Adams, Jackson.
[3] Makes restraining of pigs in the village streets a requirement.
[4] Makes the shooting of a firearm within the village a punishable offense.
[5] Makes the removal of timber from either Chicago bridge an offense.
[6] Regulates the fireproof passing of stovepipes through the walls or roof of any house. (The penalty for this infringement was $5 ($130 today) if the violation wasn’t corrected within 48 hours the penalty was repeated.)
[7] Regulates the running of horses through the streets.
[8] Prohibits the "indecent exhibition" of stallions within the town limits.
[9] Prohibits dumping of garbage, construction material, etc., in village streets.
[10] Prohibits dumping of dead animals into the river. Passed Dec. 4, 1834, at the house of Dexter Graves.
[11] Names George W. Snow as assessor & surveyor of the town.
[12] Sets the town-tax collector's compensation at 10% of the tax roll.
[13] Creates a bridge maintenance committee, appointing G.W. Dole, Medore B. Beaubien, Edmund S. Kimberly, and John Miller.
[14] Makes John Dean Caton town attorney.
[15, 16] Regulates the use of riverfront property and the application process for wharfing privileges.

Passed July 11, 1834:
· Levies a tax of ¼ of 1% on all taxable property for the year 1834.
· Instructs the surveyor to graduate South Water Street such that water will flow N into the river.
· Gives instructions to the tax collector.

Passed July 30, 1834:
· Further details of the duties of the tax collector, including the requirement to post a bond.

Passed September 1, 1834, at the house of Starr Foot:
· Prohibits the selling or dispensing of alcoholic beverages by any "tippling house (a place where liquors are sold and drunk in violation of the law) or grocery" on Sundays.
· Orders the town attorney to prosecute all offenses of the previous ordinance.

Passed September 25, 1834, at the Tremont House:
· An ordinance to prevent fire.

[Sec. 1] Divides the town into four wards as follows: E of LaSalle St. and between Jackson and South Water—first ward; N of Jackson and between LaSalle and East Water—second ward; N of the river—third ward; W of the north and south branches of the river—fourth ward.
[Sec. 2] Appoints firewardens, one for each ward: (1) William Worthingham, (2) Edward E. Hunter, (3) Samuel Resigue, and (4) James H. Kinzie (Chicago's founding father, John Kinzie’s son).
[Sec. 3] Regulates the fireproof passing of stovepipes through the walls or roof of any building.
[Sec. 4] Describes the duty and authority of the firewardens.
[Sec. 5] Sets fines for violators.
[Sec. 6] Repeals the earlier fire ordinance of November 6, 1833 (Ordinance Six).

Passed September 29, 1834, at the Tremont House:
· Makes it unlawful to remove dirt or sand from any of the town streets unless to repair those streets by order and permission of the supervisor of streets.

[Sec. 1] Further details of the authority and duty of firewardens.
[Sec. 2] Makes the warden, in whose ward a fire breaks out, "Warden in Chief," subjecting the other three wardens to his authority.
[Sec. 3] Assigns a numbered badge or plate to each firewarden, designating his ward, to be worn on his hat.

Passed November 3, 1834, at Mark Beaubien's Eagle Exchange Tavern:
An ordinance for the further prevention of fires that makes it unlawful to carry or convey firebrands or coals of fire between buildings within the town limits unless transported in a covered earthen or fireproof container.

Passed August 5, 1835:
An omnibus ordinance (a single document that is accepted in a single vote by a legislature but packages together several measures into one or combines diverse subjects).

[Sec. 1] Declares that anyone guilty of violating the laws and ordinances herewith can expect penalties.
[Sec. 2] Makes it unlawful to place obstacles (timber, stone, etc.) on public passages (streets, sidewalks, etc.) without permission of the president or trustee, except for those related to building construction, and then may only block one-half of the passage for no longer than two months.
[Sec. 3] Makes it unlawful to place casks or crates on the walkway in front of a building further than four feet or in the street unless with permission.
[Sec. 4] Makes it unlawful for any animal, wagon, or cart to cross a sidewalk unless to enter a lot or yard.
[Sec. 5] It makes it unlawful to ride or drive over a bridge faster than at the pace of a walk.
[Sec. 6] Makes it unlawful for anyone to damage pavements, walks, sewers drains, dig holes or ditches without permission, or obstruct repair.
[Sec. 7] Makes it unlawful to dispose of anything (i.e., straw shavings) into sewers, drains or ditches, obstructing its purpose.
[Sec. 8] Makes it unlawful to possess a billiard table, nine or ten-pin [bowling] alley for public use without a specific license.
[Sec. 9] Makes it unlawful for an owner with a billiard table, gambling equipment, or liquor for sale to allow the gaming house to become disorderly.
[Sec. 10] It makes it unlawful to conduct oneself disorderly, to riot, to create a disturbance in the streets within the town, or to form crowds for an unlawful purpose.
[Sec. 11] Makes it unlawful to dump on the streets or into the river any dead animals or putrid meat, fish entrails, decaying vegetables, or any other offensive substance.
[Sec. 12] It is unlawful to dump any "nuisance" into any lot.
[Sec. 13] The president or any trustee, on finding "any nuisance" in the street or in any lot, may order the perpetrator to remove it.
[Sec. 14] Makes it unlawful for any grocery or "tippling house" to sell beer on the "Sabbath, or the first day of the week [Sunday]." (Called Blue Laws or Sunday Laws are designed to restrict or ban some or all Sunday activities for religious or secular reasons, particularly to promote the observance of a day of worship or rest.)
[Sec. 15] Makes it unlawful to burn hay, straw, chips, or any combustible material in any street or in any lot without permission from a trustee.
[Sec. 16] Chips or other combustible material accumulating within buildings must be removed at least once weekly.
[Sec. 17] Makes it unlawful to dump chips or other combustible material on the streets.
[Sec. 18] Redefines how stovepipes must be passed through the roof or wall of buildings.
[Sec. 19] Forbids the carrying of open fire through streets or lots.
[Sec. 20] Forbids fireworks or the firing of guns within town limits.
[Sec. 21] Creates firewardens for each district and defines its duties.
[Sec. 22] Forbids hay stacking in the area bordered by Washington, Canal, and Kinzie streets and the lake.
[Sec. 23] Sets penalties for the offenses against the foregoing ordinances.

[Sec. 1] Sets the time when the trustees appoint three inspectors of elections, attendant to the annual election of trustees and all special town elections.
[Sec. 2] Sets the time of polling in such elections; declares poll lists to be kept in the same manner as that of the state law.
[Sec. 3] Describes inspectors' responsibilities following elections, compliant with state law.
[Sec. 4] Specifies the inspectors' filing of canvasses with the clerk of the county circuit court.
[Sec. 5] Designates special elections to fill vacancies in the offices of trustees.
[Sec. 6] Authorizes trustees to appoint from time to time as many police constables as they may think proper.
[Sec. 7] Directs trustees to choose the time and place of their meeting by resolution. Makes the president the presiding officer and gives him "only a casting vote" (to break a deadlock).
[Sec. 8] "The trustees shall meet annually thereafter on or before the second Tuesday in June and by ballot appoint a president, clerk-treasurer, attorney, street commissioner, police constable, collector of taxes, and town surgeon, two measurers of wood, two measurers of lumber, two measurers and weighers of grain, and such other officers as the trustees may deem necessary for the good of said town: if for any cause the above officers are not appointed on the day above mentioned, the trustees may adjourn from day to day until they are appointed."
[Sec. 9] Requires that bonds be filed by the treasurer, street commissioner, and collector(s) of a height (a dollar amount) deemed appropriate by the trustees.
[Sec. 10] Describes the duties of the police constable, which include the duty "to attend all fires within the limits of said town."
[Sec. 11] Describes the duties and the powers of the trustees, which include the power "to arrest all dissolute and riotous persons."
[Sec. 12] Defines the duties of the town assessor.