The Beginning of Wolf Point in Chicago, including the history of the Wolf Point Tavern.

The origin of the name Wolf Point is unknown. In her 1856 memoir "Wau-Bun, the Early Day in the Northwest," Juliette Kinzie states that 'the place was then called Wolf Point, from its having been the residence of an Indian named "Moa-way," or "the Wolf."'

Other alternative explanations are that it was so named after the landlord of the grocery that would later be called the Wolf Point Tavern. killed a ferocious wolf and hung a painted sign of a wolf outside his tavern to commemorate the event, or that it was named by a soldier at Fort Dearborn because it was a place where wolves would gather at night.

The term Wolf Point originally referred to the Chicago River's west bank at the fork junction of its branches. Still, it gradually came to refer to the whole region around the forks and, in modern usage, is often more specifically used to mean the plot of land on the north side of the forks. The confluence of the river's three branches near Wolf Point inspired Chicago's Municipal Device. This Y-shaped city identification symbol can be seen on many Chicago buildings and city-owned vehicles.

The first non-indigenous settler at Wolf Point may have been a trader named Guarie. Writing in 1880, Gurdon Hubbard, who first arrived in Chicago on October 1, 1818, stated that he had been told of Guarie by Antoine De Champs and Antoine Beson. They had been traversing the Chicago Portage annually since about 1778. Hubbard wrote that De Champs had shown him evidence of a trading house and the remains of a cornfield supposed to have belonged to Guarie. The cornfield was located on the west bank of the North Branch of the Chicago River, a short distance from the forks at what is now Fulton Street; early settlers named the North Branch of the Chicago River the Guarie River or Gary's River.

James Kinzie (Virginia-raised second son of John Kinzie and Margaret McKinzie Kinzie, his first wife), son of early settler John Kinzie, built a tavern on the west bank of the river at Wolf Point in 1828. By 1829 this tavern was operated for Kinzie by Archibald Caldwell, who was granted a liquor license on December 8 of that year. Caldwell left Chicago early in 1830, and Elijah Wentworth became the landlord of the tavern. He was, in turn, succeeded by Charles Taylor (1831–1833) and William Walters (1833–1836). The tavern became known as the 'Wolf Point Tavern' or 'Wolf Tavern,' and a painted sign of a wolf was hung outside the tavern by approximately 1833.
In about 1829, Samuel Miller and his brother John opened a store on the north bank of the river at the forks. In 1830, they enlarged their store and began to operate it as a tavern in competition with the Wolf Point Tavern. On June 2, 1829, Samuel Miller and Archibald Clybourn were authorized to operate the first ferry across the Chicago River. Clybourn was the ferryman, crossing the river's North Branch between Miller's tavern and the Wolf Point Tavern. In 1831 John Miller built a log house near his brother's tavern that he used as a tannery, Chicago's first recorded factory. Samuel Miller sold the tavern and moved away following the death of his wife in 1832.

Mark Beaubien opened the Eagle Exchange Tavern in a log cabin on the south bank in 1829. In 1831 Beaubien added a frame addition and opened the Sauganash Hotel, Chicago's first hotel. Immediately adjacent to the hotel's Tavern was Chicago's first drug store and first pharmacist, Philo Carpenter. Beaubien left the Sauganash Hotel in 1834, but the hotel continued in operation until it was destroyed by a fire in 1851. In 1837, the hotel hosted the first Chicago theatre company in a converted dining room. The site of the Sauganash Hotel was redeveloped as the Wigwam building in 1860; the site today is at 191 North Wacker and is designated as a Chicago Landmark.
James Kinzie built the Green Tree Tavern at the northeastern corner of Canal and Lake Streets in 1833. The tavern underwent a succession of owners and name changes before moving in 1880 to 33-35- 37 Milwaukee Avenue. In 1902 plans were made to preserve the building and move it to Garfield Park. However, the hotel collapsed before work could start on this project. 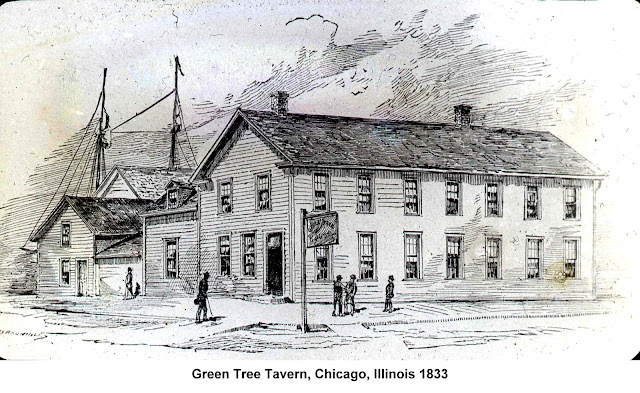 Rev. Jesse Walker started the first church on June 14, 1831, with ten members in a log cabin. In 1838, the congregation floated their log cabin across the Chicago River and rolled it on logs to the corner of Washington and Clark Streets, where it is the First United Methodist Church of Chicago today.

Archibald Clybourn's ferry across the North Branch of the Chicago River was replaced by a bridge in the winter of 1831 and 1832, and a bridge across the South Branch of the river located between Lake and Randolph Streets was added in the winter of 1832 and 1833. Early settlers J. D. Caton, John Bates, Charles Cleaver, and John Noble wrote in a letter in the fall of 1883 that both of these bridges were constructed of logs; they were about 10 feet wide and cleared the river by about 6 feet.