Excerpts from Benjamin F. Barker's personal letters to his brother Jacob Barker as Chicago incorporates in 1833.

Benjamin F. Barker rented a cabin for $3 a month by September 1832 at Chicago when he first arrived. 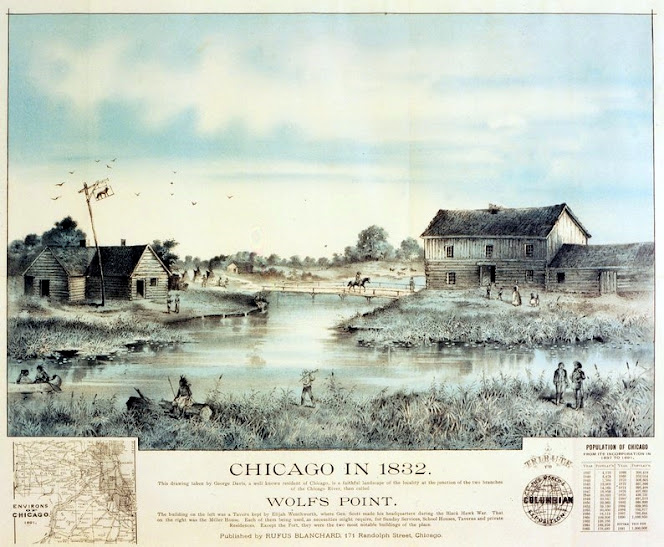 Benjamin F. Barker rented a cabin for $3 a month by September 1832 at Chicago when he first arrived. In a letter to his brother in the East, he reported that money was plentiful and requested salt and flour.
By January 1833 he chopped wood to feed his family, the only work available. Barker observed that the situation of the Indians was desperate with thousands starving. In March Barker rented a farm eight miles to the north (to the southside of today's Rogers Park community) and asked for a strong wagon and barrels of salt. Barker subscribed to the Chicago Democrat in November.
Chicago incorporates as a town on August 12, 1833, with a population of 350.
In February 1834 Barker hauled wood to town with a small wagon and oxen and requested a stock of groceries. By March, Barker opened a grocery in town and had built a house for his family, reporting in May that competition was great and liquor was in great demand. By the end of July, he wrote from Juliet [Joliet], "money was scarce in Chicago where a grocery (the term 'grocery' had a different meaning then) existed on every corner, and the country was delightful."

Letters to Jacob A. Barker are preserved at the Chicago History Museum.