The History of the Chicago Water Tower - One of Six Structures That Survived the Great Chicago Fire of 1871.

The Chicago Water Tower was completed in 1869 by architect William W. Boyington. It is 154 feet high and made from yellowing Joliet limestone. Inside was a 138-foot high standpipe, three feet in diameter, to balance the water flow. 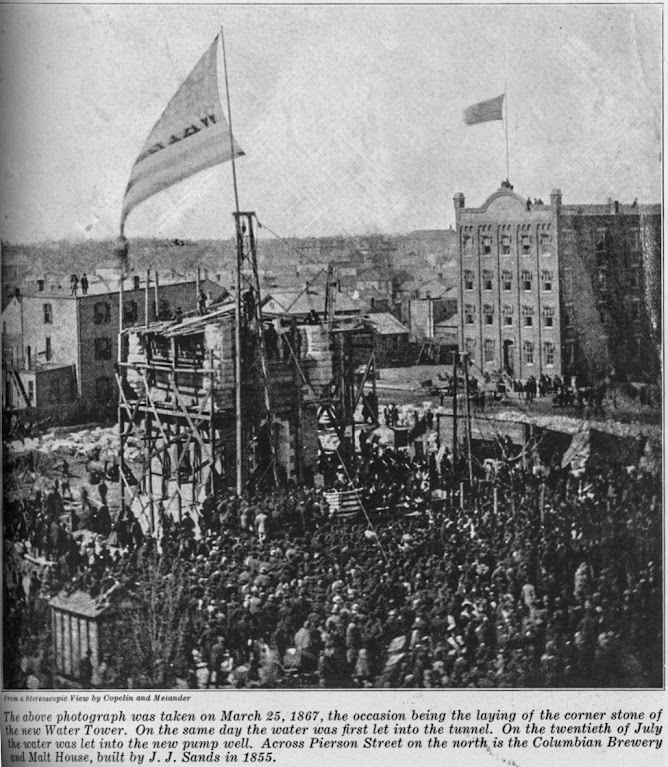 In addition to firefighting, the pressure in the pipe was regulated to control water surges in the area. The foundation of the Water Tower consists of 168 piles filled with concrete and capped with 12-inch oak timbers. Massive stones in cement complete the base up to six feet below the grade.
The Water Tower rises in five sections from the square ground-level base with battlement pillars at each of its four corners. Each of the 40-foot-wide sides has a stately doorway and two grand windows. The second and third sections are similar in design as they rise in diminishing size.

The octagonal tower is centered and set back from the top of the third section, rising 154 feet above ground level. The standpipe was removed in 1911 when it was no longer needed. However, the spiral staircase that encircled the standpipe is still intact and used to reach the tower cupola. Together with the adjacent Chicago Avenue Pumping Station, it drew clean water from water cribs in Lake Michigan. 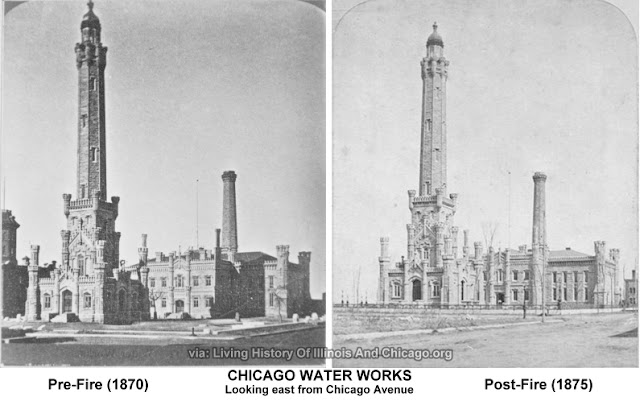 The Water Tower gained prominence after the Great Chicago Fire of 1871. While some incorrectly believe the tower was the only building to survive the fire, a few other buildings in the burnt district survived along with the tower [1]. The Water Tower was the only public building in the burnt zone to survive and is one of just a few surviving structures still standing today.
Since the great Chicago fire, the tower has become a symbol of old Chicago and the city's recovery from the conflagration of 1871.
In 1918, when Pine Street (now North Michigan Avenue) was widened, the plans were altered to give the Water Tower a featured location.

The Water Tower has undergone two renovations. The first took place over three years, from 1913 through 1916. At that time, many of the limestone blocks were replaced. The second renovation occurred in 1978, mainly consisting of interior changes with only minor changes made to the exterior of the building.
The Water Tower is functionally obsolete and serves as a visitor information center where the public can obtain literature about Chicago attractions. The Tower is also home to City Gallery, Chicago's official photography gallery. 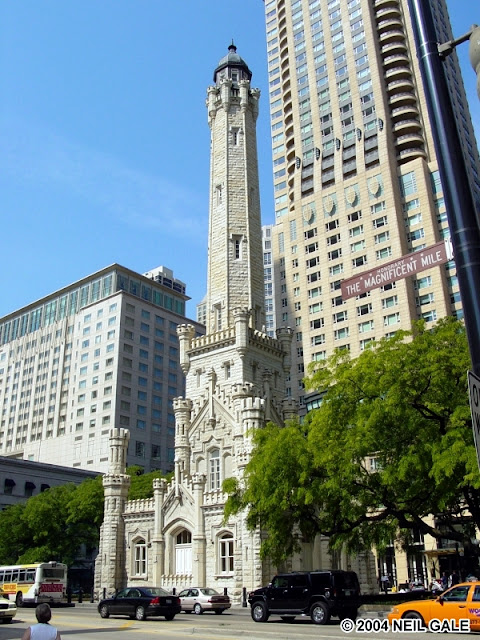 [1] The following 6 structures are the only structures from the burnt district to survive the fire:

False Claims of Other Buildings that Survived the Great Chicago Fire.
NOTE: Addresses are before the City of Chicago's Renaming and Renumbering in 1909. Use the documents below to get today's street names and current address numbers.
ADDITIONAL READING: A Brief History of North Michigan Avenue, Chicago, Illinois.