History of the Elgin and Belvidere Interurban, Belvidere, Illinois.

The Elgin and Belvidere Electric Company (operational from 1907-1930) was a 36-mile interurban line that connected Belvidere and Elgin, Illinois. It was the central link in the interurban network connecting Freeport, Rockford, Elgin and Chicago which included the Rockford and Interurban Railway to the west and the Chicago, Aurora and Elgin Railway to the east. In 1927, the line was extended to Rockford over a line of the Rockford and Interurban. 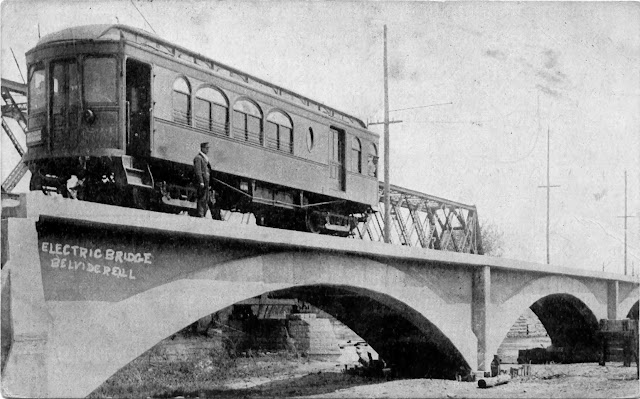 The Elgin and Belvidere Electric Company was incorporated March 11, 1905. Bion J. Arnold acquired the railroad after it went into financial difficulties during construction in 1906. His company, The Arnold Company, designed and built the power generating stations and the overhead structure for the railway, and had largely been paid in railway securities. Construction of the line was completed in 1906, however it did not enter service until February 2, 1907. 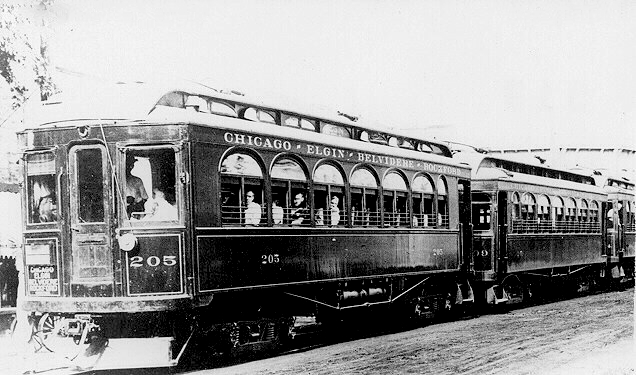 Arnold used the railroad as a proving ground for pioneering designs; the first automatic substation was on the line at Union and the railroad was one of a handful to use gasoline generators to generate electric power. Its rolling stock consisted of standard wooden interurban cars which typically ran in short one- to three-car trains on hourly intervals. Arnold himself was heavily involved in the line's construction and management, and at one point operated the cars himself during a strike. 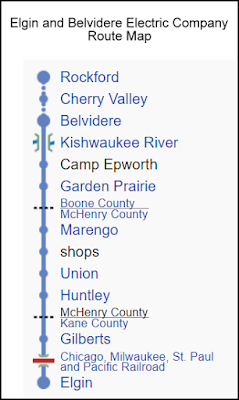 ELGIN AND BELVIDERE INTERURBAN CLOSING
The railroad was never particularly profitable, with a rate of return of about 2% in its best years. On March 10, 1930, the railroad ceased operations due to competition from the parallel Chicago and North Western Railway and from the automobile, after the paving of nearby US 20. The Depression also a huge factor that drove the E&B (and many other interurban routes) out of business.