The Chicago Motor Coach Company was founded in 1917 by John Daniel Hertz, Sr. [1] providing Chicago's first bus transportation services, primarily in places where streetcars could not travel.
At 1 pm. on March 25, 1917, a Chicago Motor Coach Company double-decker bus full of Chicago's elite, including Mayor William "Big Bill" Thompson and Illinois Governor Edward Dunne, embarked on the North Side's very first public bus ride from Devon Avenue and Sheridan Road in the Edgewater community, all the way downtown.
On the return trip, the group stopped at the Edgewater Beach Hotel for a celebration luncheon.

Initially, 11 buses were launched, with another 39 rolled out over the following month.
The buses ran from 6 o’clock in the morning until 1:30 at night. Buses were scheduled to run 3-6 minutes apart and had the capacity to carry 51 patrons — 22 on the bottom and 29 on the top. The vehicles had a step-less entrance and an enclosed stairway to the upper level.

The coaches were staffed by both a driver and chauffeur. While the driver steered the vehicle, the chauffeur stood in a small enclave on the bus's exterior and helped passengers get on and off. 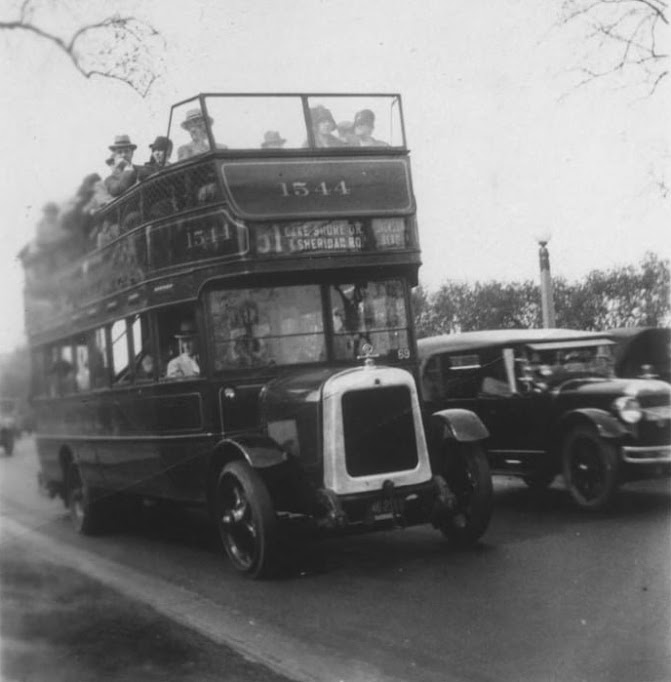 The bus system route ran south on Sheridan from Devon, down through various parts of Lincoln Park before winding through the Loop onto Michigan Avenue, Ontario, La Salle, Randolph, and Adams streets, stopping at a final State Street terminal and then turning around.
So few seats were provided by the bus company during the morning rush hour that it had been observed that private motorists had taken pity on intended bus passengers and stopped on Sheridan Road to offer to give them a lift. 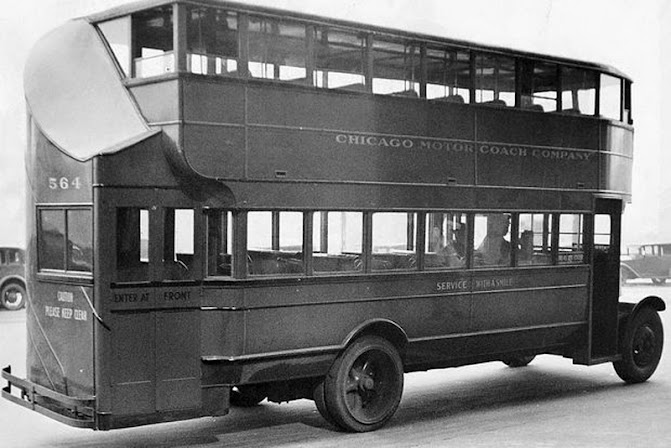 Hertz, president of Yellow Cab Company, bought the bus entity in 1924 and merged it with New York's Fifth Avenue Motor Coach Corporation to create The Omnibus Corporation. He sold a majority interest in the Yellow Truck and Coach Manufacturing Company to General Motors in 1925 and then the balance in 1943.

Chicago Transit Authority is an independent governmental agency created by state legislation. CTA began operating on October 1, 1947, after it acquired the properties of the Chicago Rapid Transit Company and the Chicago Surface Lines. On October 1, 1952, CTA became the predominant operator of Chicago transit when it purchased the Chicago Motor Coach system. 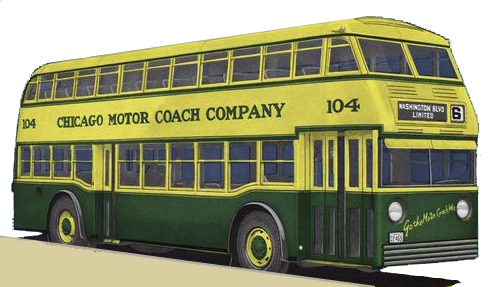 From its early years, the Chicago Motor Coach fleet consisted of double-decker buses that provided additional capacity, as well as great views from the upper level. Unfortunately, its earliest double-deckers also had their drawbacks, since the upper level was not completely enclosed or heated. The roof extended only over each row of seats and was open in the middle, which provided little protection from the elements. In addition, as time went on, there were various clearance issues that posed potential hazards to the passengers — some riders recalled passengers having to duck down when the double-deckers went under some of the railroad viaducts — so these buses were phased out, with the last double-decker being retired in 1950.
Compiled by Dr. Neil Gale, Ph.D.
[1] John Daniel Hertz, Sr. (1879-1961) founded the Chicago Motor Coach Company in 1917 to run bus transport services in Chicago. During the period that he was running this company, he was actively involved with many other transport businesses, including taxicab operation, taxicab manufacture, car rental, and manufactured coaches and later cars. Hertz formed the Yellow Coach Manufacturing Company in 1923 as a subsidiary of the Yellow Cab Company to manufacture buses, many of which were used by the Chicago Motor Coach Company.
Hertz formed the Omnibus Corporate in 1924 as a merger of the Chicago Motor Coach and the Fifth Avenue Motor Coach Corporation of New York City. Between 1925 and 1936, The Omnibus Corporation acquired streetcar companies that operated on Madison Avenue and Eighth Avenue in New York City's borough of Manhattan.
Hertz sold a majority interest in the Yellow Coach Manufacturing Company to General Motors in 1925 and then the balance in 1943.
In 1952, the Chicago Transit Authority (CTA) purchased the Chicago Motor Coach Company.
In 1953, Hertz made a deal for The Omnibus Corporation to purchase the 'Hertz Drive-Ur-Self System' car rental business from GM that he had sold to GM as part of the Yellow Truck and Coach Manufacturing Company in 1925. Hertz sold all The Omnibus Corporation's public transport interests the same year, changed the name to 'The Hertz Corporation,' and floated it (refers to the regular shares a company has issued to the public that are available for investors to trade) on the New York Stock Exchange the following year.
Presented by Dr. Neil Gale, Ph.D. at 7/10/2021 06:51:00 PM