Six of the worst jokes Abraham Lincoln ever told.

Abraham Lincoln was a compulsive teller of stories and jokes, the first president to make laughter a tool of the office. Lincoln had a wicked sense of intellectual humor and used humor to hammer a concept or his point of view home. Lincoln was as clever in using humor as he was resourceful in political management. 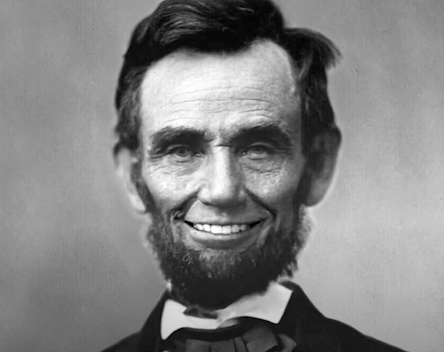 COUNT DOWN
6. "I heard a good story while I was up in the country. Judge D was complimenting the landlord on the excellence of his beef. "I am surprised," he said, "that you have such good beef. You must have to kill a whole critter when you want any." "Yes," said the landlord, "we never kill less than a whole critter."
5. After Secretary of War Edwin Stanton replied to a telegram demanding urgent instructions with "all right, go ahead:" "I suppose you meant," said Mr. Lincoln, "that it was all right if it was good for him, and all wrong if it was not. That reminds me," said he, "of a story about a horse that was sold at the cross-roads near where I once lived. The horse was supposed to be fast, and quite a number of people were present at the time appointed for sale. A small boy was employed to ride the horse backward and forward to exhibit his points. One of the would-be buyers followed the boy down the road and asked him confidentially if the horse had a splint." "Well, mister," said the boy, "if it's good for him, he has got it, but if it isn't good for him, he hasn't."
4. "I once knew," Lincoln said, "a good sound churchman, whom we will call Brown, who was in a committee to erect a bridge over a very dangerous and rapid river. Architect after architect failed, and, at last, Brown said, he had a friend named Jones who had built several bridges and could build this. Let us have him in,' said the committee. In came Jones. Can you build this bridge, sir?' Yes," replied Jones. "I could build a bridge to the infernal regions if necessary. The sober committee was horrified. But when Jones retired, Brown thought it but fair to defend his friend. I know Jones so well,' said he, and he is so honest a man, and so good an architect, that if he states, soberly and positively, that he can build a bridge to Hades, why, I believe it. But I have my doubts about the abutment on the infernal side. When politicians said they could harmonize the northern and southern wings of democracy, why do I believe them? But I had my doubt about the abutment on the southern side."
3. The President said, "the Army dwindled on the march like a shovelful of fleas pitched from one place to the other." (John Hay's diary)
2. From February 17, 1864, New York Post, "Several Little Stories by or about President Lincoln:" One of the latest reported is his remark when he found himself attacked by people asking favors. "Well," he said, "when the contagious disease was coming upon him, I've got something I can give to everybody now."
1. Well, there was a party once, not far from here, which was composed of ladies and gentlemen. A fine table was set, and the people were greatly enjoying themselves. Among the crowd was one of those men who had the audacity — was quick-witted, cheeky and self-possessed — never off his guard on any occasion. After the men and women had enjoyed themselves by dancing, promenading, flirting, etc., they were told that the table was set. The man of audacity — quick-witted, self-possessed and equal to all occasions — was put at the head of the table to carve the turkeys, chickens and pigs. The men and women surrounded the table, and the audacious man being chosen carver whetted his great carving knife with the steel and got down to business & commenced carving the turkey, but he expended too much force & let a fart — a loud fart so that all the people heard it distinctly. As a matter of course, it shocked all terribly. A deep silence reigned. However, the audacious man was cool and entirely self-possessed; he was curiously and keenly watched by those who knew him well, and they suspected that he would recover in the end and acquit himself with glory. The man, with a kind of sublime audacity, pulled off his coat, rolled up his sleeves, put his coat deliberately on a chair, spat on his hands, took his position at the head of the table, picked up the carving knife and whetted it again, never cracking a smile nor moving a muscle of his face. It now became a wonder in the minds of all the men and women how the fellow was to get out of his dilemma. He squared himself and said loudly & distinctly: "Now, by God, I'll see if I can't cut up this turkey without farting." (via William Herndon)
I'm confident that I can find more of Lincoln's 'bad' jokes with more research.
My Article: The Humorist and Literary Lincoln.
Compiled by Dr. Neil Gale, Ph.D.
Presented by Dr. Neil Gale, Ph.D. at 11/10/2022 12:53:00 PM