Salvatore Ferrara was just 16 years old when he left his home in Nola, Italy, in 1900 and emigrated to the United States. Salvatore Lezza came to America in 1905 with a secret recipe for spumoni ice cream. He shared his plans for a sweet shop with Salvatore Ferrara, eventually leading them to open the first Italian pastry and candy shop, Ferrara-Lezza & Co., in Chicago's Little Italy neighborhood in 1908.

An instant success, they were recognized throughout the city and suburbs for their fine pastries, wedding cakes and confections.
Salvatore soon met and married Serafina Pagano, and they labored together to provide Chicago with beautiful desserts and candies. They made a lasting name for themselves through hard work and commitment to using quality ingredients. Serafina, a dynamic business personality and philanthropist, was loved by all who knew her. She was known as "The Angel of Halsted Street." She is still remembered today.

The third generation of Ferrara proudly carried on the tradition of providing its customers with a wide variety of delicious desserts of the highest quality. Ferrara's Signature Italian Cannoli Cake has become a tradition for thousands, enjoyed through the generations. 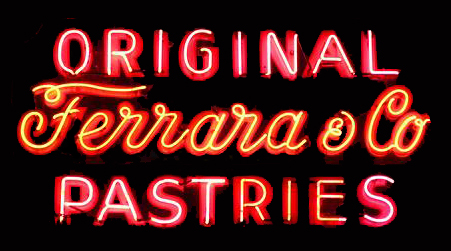 Eager to meet new challenges, Salvatore put Serafina in charge of the bakery and concentrated his efforts on expanding the candy business.
With the help of his two brothers-in-law, Salvatore Buffardi and Agnello Pagano, they launched the Ferrara Pan Candy Company, headquartered at 7301 West Harrison Street, Forest Park, Illinois, today.