Max W. Roos was the Assistant Manager at the Blackhawk Restaurant at 139 North Wabash, Chicago. The success of the Blackhawk Restaurant and Grill has inspired its former assistant manager, Max, to decide to have a loop restaurant of his own.
Consequently, he had leased the entire basement of the Mallers Building (constructed in 1918 in an art-deco style), 5 South Wabash at Madison Street, for ten years at a term rental of $110,000 ($917/month) starting on March 1, 1923.
Max opened the Roos' Restaurant as soon as the extensive alterations were completed, probably around the end of February 1923. 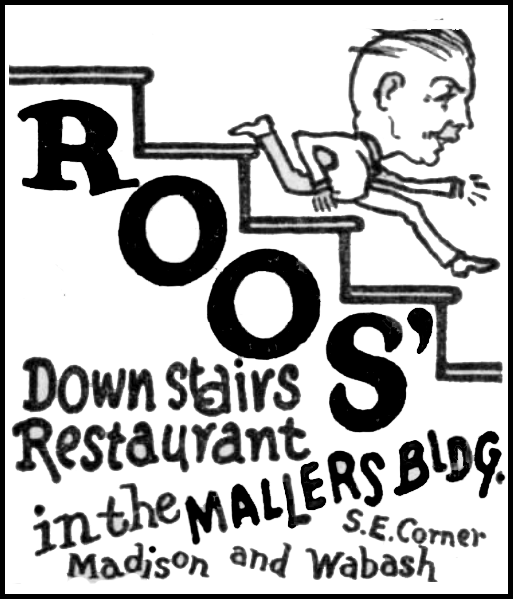 The new Restaurant was popularly priced along the lines of the Blackhawk Restaurant. The space just rented was formerly occupied by the Illinois Cafeteria.

Roos' Restaurant even offered a $1 Thanksgiving feast and all dinner choices, all the time, which would cost $17.50 today.

By Roos' third week in business, a half-page Tribune ad on March 7, 1923, "It's here, my 65¢ Lunch." My $1 dinner has been such a tremendous success I know a similar luncheon will be equally as popular. So, Starting today, I will serve between 11 and 3 o'clock for a 65¢ special luncheon which I believe cannot be duplicated for the same price elsewhere.
I will give a choice of six entrees. With each choice, I will serve potatoes, one extra vegetable, bread and butter, and your choice of pie, pastry, and ice cream, and your choice of tea, coffee, and milk. The portions will be liberal, and the food will be the same first-class quality you get with my famous $1 dinner. In fact, you will get Roos' Quality and Roos' Service in a wonderful table d'hote lunch at  65¢. March 7, 1923.
Roos' Restaurant offered a $1 Thanksgiving feast which would cost $17.50 today.
IN THE END
November 3, 1925, Chicago Tribune, under the heading of "Petitions in Bankruptcy," Roos' Restaurant Co. claimed involuntary bankruptcy[1]. Creditor Beatrice Creamery Co. claims $1,000 ($17,000 today).
After 2 years and 8 months in business, Max couldn't come up with $1,000. It took some time for the bankruptcy to be discharged.
Compiled by Dr. Neil Gale, Ph.D.