The tamale is recorded to have originated in “Mesoamerica as early as 8000 to 5000 BC” in Pre-Columbian history. As making tamales is a simple method of cooking corn, it may have been brought from Mexico to Central and South America. However, according to some archaeologists, the tamales date from the year 100 AD. They found pictorial references in the Mural of San Bartolo, in Petén, Guatemala.” Although the tamales may have moved from one country to another, as many other countries in South and Central America seem to have their own version of tamales, there is no evidence of “where the migration of the tamales went from north to south” or vice versa within the Americas.

Modern-day manufactured tamales, called corn roll tamales, became popular in the early 1940s.
Tom Tom Beef Tamales have been a staple of Chicago since 1937. Served straight from metal steamers at Italian beef and hot dog stands across the city of Chicago. Corn roll tamales were invented in Chicago, and we have found ways to love them.
Unlike traditional tamales, usually made with masa (cornmeal dough), stuffed with vegetables, meat and or cheese, and then rolled in a natural wrapper, like a corn husk or a banana leaf, before warming, frequently by steam. Unlike anything you'll find in Mexico, Chicago’s corn roll tamales are an industrial product.

Chicago’s original tamales are manufactured on equipment that extrudes cylindrical shafts of brownish-colored cores of lightly seasoned beef, cornmeal, and yellow cornmeal wrapped in a yellow cornmeal exterior. The two big Chicago corn roll tamales brands are Tom Tom Tamale Manufacturing Co., Chicago (est.1937) and Supreme Tamale Co., Elk Grove Village (est.1950).
Tamales were brought to the United States in the late 1800s or early 1900s by Mexican workers who may have pocketed a few before heading off to work in the fields, according to the Southern Foodways Alliance, part of the University of Mississippi’s Center for the Study of Southern Culture.
In those fields, specifically in the Mississippi Delta, Mexican workers likely encountered Black workers with whom they shared the tamales.
sidebar

Tamales were immortalized by Delta bluesman Robert Johnson, of the Faustian bargain at the crossroads, in “They’re Red Hot:”

I got a girl, say she is long and tall.

She sleeps in the kitchen with her feet in the hall.

During the Great Migration, Blacks brought along their tamales. The first documented sale of tamales in Chicago was at the 1893 World’s Columbian Exposition, a hotbed of the culinary invention that also introduced such landmark innovations as Brownies, Aunt Jemima pancake mix, and a few other new food inventions.
However, the spread of corn roll tamales in Chicago may have less to do with Mexican and Black food traditions and more with Greeks and Armenians. The Petros family bought the Tom Tom Tamale & Bakery in 1937, and the Paklaian family bought Supreme Frozen Products in 1950.
sidebar

The brand name came about, or so the story goes, because the company was once owned by two Greek fellows named `Athanasios,' explains company president Nick Petros. "Since 'Athanasios' is somewhat of an exotic name. In English, they were called 'Tom.' So, two Toms became Tom Tom. Whether or not this is a true story I don't know," Petros admits, "but it's a good story."

This carb-heavy street food seems designed to fill up whatever belly space remains unoccupied after one puts away an Italian beef sandwich or a Chicago-style hot dog with all the fixings. Chicago corn roll tamales are usually one of the least expensive items on a menu, though it’s not exactly a value: at Superdawg, tamales are $3.50 each, and their jumbo (their regular size is 6 hot dogs to a pound) hot dog with fries is $7.25.
Corn roll tamales are the star of another Chicago food, the “tamale boat,” also called “chili cheese tamales,” in which tamales are submerged in chili to become a kind of lush, spongy cornmeal dumpling that absorbs flavors beautifully. This version of corn roll tamales is usually served with sports peppers, chopped onions and cheese, which add even more flavor.
Corn roll tamales are also used in other Chicago original foods, like the Mother-in-Law (a tamale in a hot dog bun, ladled with chili, dressed with standard Chicago hot dog condiments), as served at many hot dog joints.
Sidebar

Bourdain brought the national spotlight to Chicago's southside "Mother-in-Law" sandwich, claiming it to be “disturbing in design, but strangely compelling." Back in 2009, when No Reservations aired its Chicago episode, he called the city “a colossus right smack in the middle of the country” with “everything that I love about a city — tall towers, hard corners, and sharp elbows. And, of course, food.”

Few deem Chicago corn roll tamales to be a culinary masterpiece on the level of a Chicago Italian beef or a Chicago hot dog. Still, it’s Chicago, and it's ours. I recommend you have your Chicago corn roll tamales in a boat with chili, onion and cheese. Many also add sports peppers, but, of course, toppings are your choice.
Tom Dziedzic sent me some photos of his mother working at Tom Tom in 1939 or 1940.
sidebar

An honorable mention goes to Veteran Tamale which began in 1946 at 33rd and Morgan streets in Chicago. In 1947 they bought the building at 3133 South Archer Avenue. The family stopped using meat in the 1960s after inspectors with the United States Department of Agriculture continually hassled them. Veteran Tamale switched to spiced, textured soy protein cooked in lard, then ditched the lard for vegetable oil. The final vegetarian recipe was ideal for Catholics abstaining from meat during Lent. Veteran Tamale closed in January 2017. 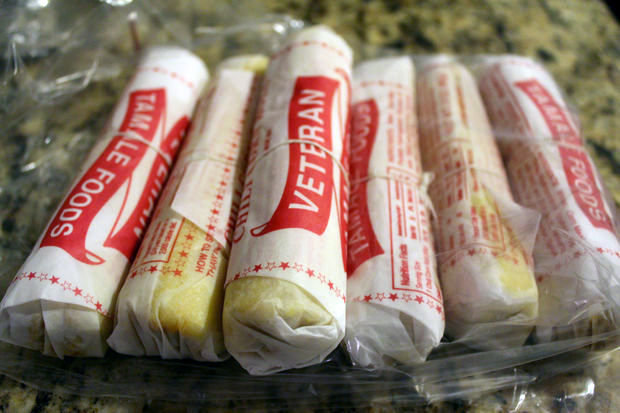