The Story about Aunt Jemima and the Illinois Aunt Jemima's Kitchen Restaurants.

The first Aunt Jemima's Pancake House began at Disneyland in Anaheim, California, on August 17, 1955. It was located on New Orleans Street in Frontierland and featured indoor and outdoor patio seating.
AUNT JEMIMA'S KITCHEN IN SKOKIE

Aunt Jemima's Kitchen Restaurant at 4700 Dempster Street, Skokie, Illinois opened on Sunday, November 13, 1960. The two black hostesses were dressed as Aunt Jemima, with an apron and kerchief on her head would greet and seat you. They had a lot of different kinds of pancake syrups, to use with the 37 kinds of pancakes, on each table in their three dining rooms; the Cotillion Room, the Fireside Room, and the Garden Room.

The Cotillion room was carpeted and the decor featured large walnut tables and cane back chairs; hurricane lamps mounted on the walls and set in antique gold frames. Bright watercolor paintings hung on the wall.
The Garden room featured a New Orleans type motif with a sunken garden. it had artificial bushes and small palm leaf bushes and candy cane striped leather seats.
The Fireside room had plank oak floors and paneled walls; burled oak tables; bucket seat chairs; a natural fireplace and a display of Hudson Bay firearms.

When Aunt Jemima's Kitchen closed its doors in 1968 or 1969, For a very short time a restaurant called The Bum Steer moved in. Next, the Gold Coin Restaurant opened, then the Barnum & Bagel Restaurant. Pita Inn, after 33 years at 3910 Dempster Street, razed the old restaurant and built a new building on the property at 4710 Dempster Street, opening on Wednesday, June 3, 2015.
A BRIEF HISTORY OF THE COMPANY
In 1889, Chris Rutt and Charles Underwood of the Pearl Milling Company in St. Joseph, Missouri, developed Aunt Jemima, the first pancake-ready mix. The initial owners soon went bankrupt and sold their company to Randolph Truett (R.T.) Davis Milling Company in 1890.
R.T. Davis Milling Company hired Nancy Green to portray “Aunt Jemima” and tour the country promoting her brand. Due to the character’s popularity, R.T. Davis Milling Company fabricated a backstory through the booklet “Life of Aunt Jemima: The Most Famous Colored Woman in the World.” (The entire booklet is presented below as a footnote.)

For the Chicago Century of Progress World’s Fair in 1933-34, the advertising planners decided to bring the Aunt Jemima character back to life. They hired Anna Robinson, described as a large, gregarious woman with the face of an angel. She traveled the country promoting Aunt Jemima until her death in 1951. Quaker’s first registration of the Aunt Jemima trademark occurred in April 1937.
From 1955 until the late 1960s, Aylene Lewis was hired to portray Aunt Jemima at the Aunt Jemima Kitchen restaurant established in the newly opened Disneyland in California. 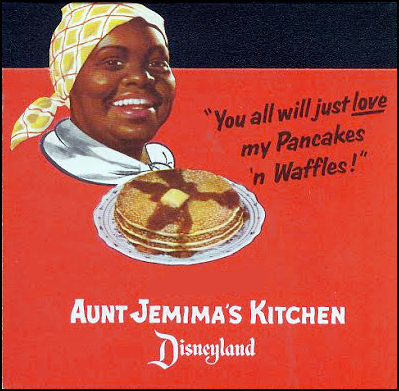 THE HISTORY OF AUNT JEMIMA
The first Aunt Jemima, Nancy Green, was born a slave in Kentucky. She was a renowned “storyteller” and was discovered by Charles Rutt and Charles Underwood in 1890 who was searching for a “Mammy” archetype to promote the first-ever box product they named the “Aunt Jemima Pancake Mix.”
In 1889 the creators of Aunt Jemima, Charles Rutt, and Charles Underwood, sold the company to Randolph Truett Davis Milling Company, who soon found Nancy Green in Chicago. The previous owners had already agreed upon her ‘look’ of a bandana and apron. R.T. Davis combined the Aunt Jemima look with a catchy tune from the Vaudeville circuit to make the Aunt Jemima brand.
Aunt Jemima's Lullaby, by S.H. Speck, 1896.
NOTE: This song was created at a time when
dialect and racial stereotypes were
regularly used as entertainment.
Green’s identity was first uncovered at the Chicago World's Columbian Exposition in 1893. She cooked the pancakes, sang songs, and told stories of the Old South. Her charismatic personality helped establish the hugely successful pancake mix. There were so many people interested in the Aunt Jemima exhibit, police were called for crowd control. Green was given an award for showmanship at the exposition. As a result of her dedication, Aunt Jemima received 50,000 orders for pancake mix. Because she excelled at promoting their product at the Exposition, Green was signed by Rutt and Underwood to an exclusive contract that gave her the sole right to portray the character of “Aunt Jemima” for the rest of her life. Green’s new career allowed her the financial freedom to support her family and also to work as an activist for negro causes and anti-poverty programs.

Nancy Green died on August 30, 1923, in Chicago, when a car collided with a laundry truck and "hurtled" onto the sidewalk where she was standing under the 46th Street elevated 'L' tracks. She is buried in a pauper's grave near a wall in the northeast quadrant of Chicago's Oak Woods Cemetery. After 97 years, a headstone was laid on Mrs. Green's grave in June of 2020.

After Green’s passing, the owner of Aunt Jemima, R.T. Davis Milling Company, experienced financial issues, and the brand was sold to Quaker Oats two years later. As for the image of Aunt Jemima, Nancy Green was followed by Anna Robinson, who’s image was changed to a painted portrait on the packaging of the mix. Next was Chicago blues singer and actress Edith Wilson. She was the first Aunt Jemima to appear in television commercials.
After Wilson, there was Ethel Ernestine Harper, a former school teacher, and actress. The fourth Aunt Jemima was Rosie Hall who was an advertising employee at Quaker Oats until she discovered their need for a new Aunt Jemima. After she died, Hall’s grave was declared a historical landmark.
Next, there was Aylene Lewis. She made her first appearance as Aunt Jemima at the opening of Aunt Jemima's Restaurant at Disneyland in 1955. In 1970 Disneyland ended its contract with the Quaker Oats Company and renamed its Aunt Jemima Restaurant to "Magnolia Tree Terrace," then changing names again in 1971 to the "River Belle Terrace."

The last woman that was known to appear as Aunt Jemima publicly was Ann Short Harrington. Harrington would make television appearances as the brand spokesperson in the New York area.
INDEX TO MY ILLINOIS AND CHICAGO FOOD & RESTAURANT ARTICLES.
Compiled by Dr. Neil Gale, Ph.D.

Because of the Aunt Jemima character's popularity, R.T. Davis Milling Company fabricated this backstory through the booklet “Life of Aunt Jemima: The Most Famous Colored Woman in the World."

Inside were an office and parlor beautifully fitted up for the reception of visitors and the use of officers of the R.T. Davis Milling Company. Around the room were the different medals and diplomas won by this Flour in all portions of the world at various exhibitions. A few feet away from the barrel, however, and ﻿commanding the wonder and admiration of all visitors to the agricultural hall, was the most remarkable and successful exhibition in the food product. This display was neither more nor less than the original Aunt Jemima, herself, making pancakes from Aunt Jemima Flour, each package of which bears her portrait. It can be imagined that it did not take the visitors to the World's Fair, especially those from the South, long to learn of this attraction. The consequence was that at times the crowd was so great around this exhibit that the assistance of special police had to be secured to keep it moving, as it often blockaded seriously that portion of the building.
The World's Fair Committee on awards did not hesitate to bestow the Augustus Saint-Gaudens Medallion and a parchment certificate for the excellence of the Aunt Jemima Pancake Flour from R.T. Davis Milling Company.

It had been surmised by the competing millers that the R.T. Davis Milling Company would carry off the first premium, but no one was prepared for the sweeping language of the award given them—a medal for every line they exhibited.
Over 50,000 orders were received at the booth alone for packages of Aunt Jemima's Pancake Flour. These orders came from Europe, Canada, and all parts of the United States.
It will be interesting for everybody to know that this matchless preparation. Aunt Jemima's Pancake Flour is a pure combination of the great food triumvirate, Wheat, Corn, and Rice. It is now kept in stock by almost every grocer in the land, and much of its phenomenal success is ﻿due to the guarantee which is given with every package, as follows:

''Buy a package of Genuine Aunt Jemima's Self-Rising Pancake Flour, and if you do not find it makes the best cakes you ever ate, return the empty box to your grocer, leave your name, and the grocer will refund the money and charge it to us."

If your grocer does not keep it, tell him the trade is supplied by all wholesale grocers.
MANUFACTURED BY R.T. DAVIS MILLING COMPANY,
ST. JOSEPH, MISSOURI
U. S. A.
INDEX TO MY ILLINOIS AND CHICAGO FOOD & RESTAURANT ARTICLES.
Presented by Dr. Neil Gale, Ph.D. at 11:00 AM