When the Metropolitan Theatre opened in 1917 for the Ascher Brothers circuit on South Parkway (today South Martin Luther King, Jr. Drive) and East 46th Place, the South Side neighborhood was mainly middle-class Irish and German Jews. After WWI, as Negroes poured in from the South, the area changed to a predominantly Negro community. 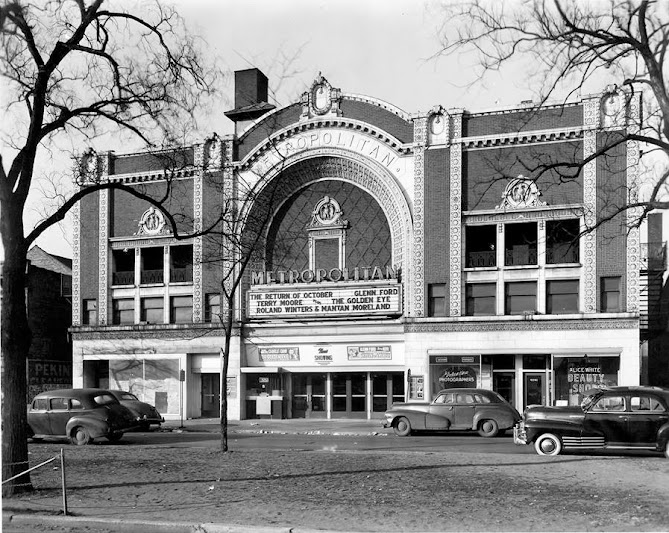 The Metropolitan Theatre could seat almost 1,400 in elegant surroundings and be equipped with a state-of-the-art projection system and air-conditioning, still a rarity in movie theatres, especially ones outside the downtown Loop. It was designed by Henry L. Newhouse.
Until the Metropolitan Theatre opened, its nearest competition was the far-smaller Revelry Theatre around the block on 47th Street, which went out of business just a few years later. Ascher Brothers staffed the Metropolitan Theatre with an all-white staff. In its early years, there was constant tension between Negro patrons and the Theatre’s employees. According to the Theatre management, trouble was not tolerated.
However, in 1923, a Negro customer filed a complaint of discrimination with the National Association for the Advancement of Colored People (NAACP) against the Ascher Brothers. They pledged to work with the NAACP to avoid any future incidents of discrimination.
When Carl Lewis, a Negro man, was hired as the Metropolitan’s assistant manager in 1926, it marked the first time in Chicago that an Negro rose to managerial ranks at a Theatre.
Around this time, Ascher Brothers hired Sammy Stewart, who was the biggest name in jazz in early to mid-1920s Chicago, to perform at the Metropolitan Theatre. Stewart began to draw crowds of Negroes by the thousands to the Theatre, and it was soon the most successful in the circuit.
Not only was Sammy Stewart a huge draw, but other major names in jazz of the era, like Fats Waller and Erskine Tate, also played at the Metropolitan Theatre.
By the late-1920s, it was the most popular motion picture Theatre in Chicago for Negroes.
However, by the early-1930s, with the Great Depression ongoing and the opening of the palatial Regal Theatre and Savoy Ballroom just up South Parkway, the audience at the Metropolitan Theatre began to decline rapidly.
Also, the Theatre management was growing less and less to pay for the soaring costs of A-list performers and first-run features, which the Regal Theatre and Savoy Theatre’s owners were more than happy to do. It was taken over by Warner Brother Circuit Management Inc in 1931.
Still, the Metropolitan Theatre survived, in fact, longer than its rival, the Regal Theatre. Known in its later years as the Met Theatre, it screened second-run and later exploitation films before closing in 1979.
Despite the pleas of area preservationists, stung by the loss of landmarks like the Regal Theatre and the Savoy Theatre, who hoped to one day turn the former Theatre into a community center, the city ordered its demolition in 1997.
Compiled by Dr. Neil Gale, Ph.D.
Presented by Dr. Neil Gale, Ph.D. at 10/11/2022 02:29:00 PM