The History of the 1937 Memorial Day Massacre at the Republic Steel Company's South Chicago, Illinois, Plant.

NOTE: I present articles without regard to race, color, political party, religion, national origin, citizenship status, gender, age, disability, or military status. What I present are FACTS — NOT ALTERNATIVE FACTS — about the subject. What you won't find are rumors, lies, unfounded claims, character assassinations, hateful statements, insults, or attempts at humor.

Initially, there was nothing remarkable about a Memorial Day gathering of striking steelworkers at Sam's Place, a Southeast Side tavern, 85 years ago. A day without picket lines and walkouts would have been something to discuss during the Great Depression. The demonstrators had no idea they were walking into history when they marched south from the houses, railroad yard and barge docks.
But at 118th Street and Burley Avenue, they confronted a phalanx of Chicago police drawn up in front of a Republic Steel plant, where cops and workers had previously clashed since the walkout began a few days earlier.
An AP photographer witnessed what happened next: "There was so much shouting I couldn't make out what was being said, but it looked like the police were trying to persuade the strikers to go home. 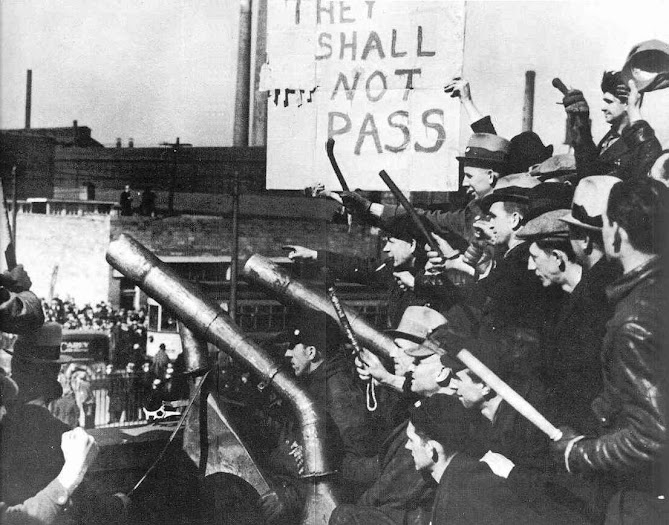 "Suddenly, I heard a shot which, I think, came from the strikers. The strikers immediately began throwing clubs — big ones, bricks and pieces of machinery.
Violence was endemic to labor disputes of the time. On this occasion, a film crew from Paramount News was on the scene, transforming this tragic encounter into the Depression Era's equivalent of earlier labor struggles in Chicago, like the Haymarket Riot and Pullman strike. 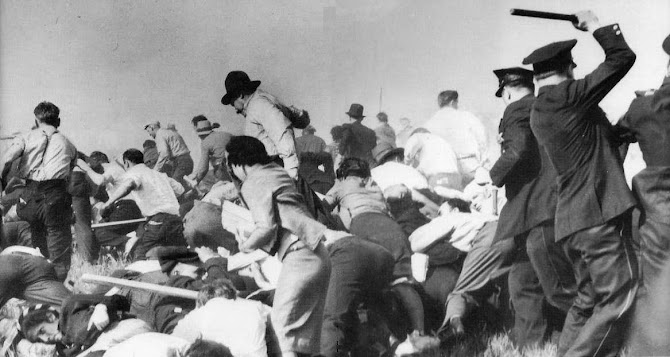 "Some police are shown swinging their clubs," noted a Tribune reporter after screening the footage. 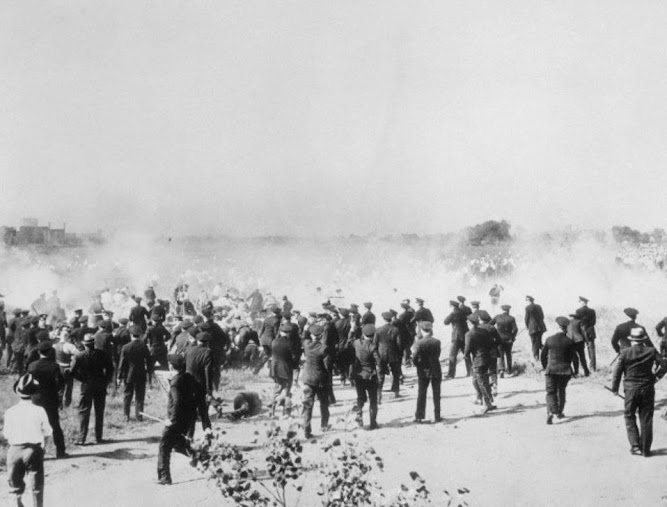 "Billows of gas are being wafted over the heads of the rioters. The motion picture is accompanied by sound effects, in which words are indistinguishable. Gunshots can be heard momentarily, perhaps a second or two. No shooting can be seen, and it is impossible to determine where the shots came from."
What happened in that film and what to call it remained in dispute. Was it a Memorial Day Massacre, as trade unionists saw it? Or, a Republic Steel Riot, as the company and city officials dubbed it? Police and protesters, of course, recalled the incident differently.
Eighty-five thousand steelworkers in five states walked out on Wednesday, May 26, 1937, idling 37 plants. Five Chicago-area mills shut down, with 22,000 workers walking out. Four days later came the deadly clash at Republic Steel.
On Sunday, May 30, 1937, striking Republic workers and their allies attempted to set up a picket line in the [public] prairie land in front of the mill. Chicago police, who were already on the scene, responded with guns and clubs, injuring roughly 100 hundred people and killing 10 men.
Sam R. Popovich, Earl J. Handley, Kenneth Reed, Hilding Anderson, Alfred Causey, Leo Francisco, Otis A. Jones, Joseph Rothmund, Anthony Taglieri, and Lee Tisdale were murdered by the Chicago Police to protect commerce over people.

Officers claimed they responded to violence with violence to protect the mill and the whole country from the Commies (communists). A congressional investigation showed the claims of worker violence to be false, and only a handful of those present that day held radical left-wing political beliefs.
Molly West, a young Polish immigrant, involved in union organizing, told the Tribune: "Once I got close to the mill, we heard shots. I was lucky because I was knocked down, and other people fell on top of me."
Patrolman Walter B. Oakes said: "Suddenly, there was a shower of bricks and clubs. The mob pushed forward, and I was struck across the back with a club and knocked to the ground." 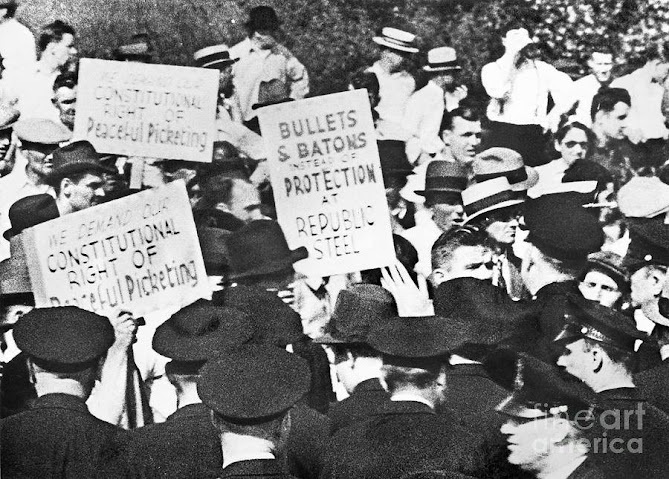 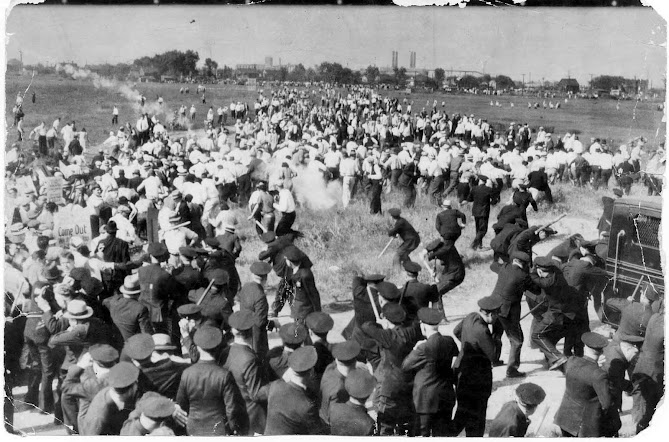 Under a headline, "Murder in South Chicago," a Tribune editorial blamed the violence on "a murderous mob ... inflamed by the speeches of CIO organizers." The initials then stood for Committee for Industrial Organization, an upstart wing of the union movement led by John L. Lewis. The miners union head, Lewis, had decided to organize the less-skilled workers whom craft-union leaders traditionally disdained. A slap in the face of the union movement's establishment set off a fury of organizing.
Two governmental investigations came to opposite conclusions. A Cook County coroner's jury "absolved the police of blame, holding the killings were justifiable," the Tribune reported. A U.S. Senate committee, chaired by Sen. Robert La Follette of Wisconsin, a notable liberal, said the police used "excessive force."
Muddying the waters, even more, the cameraman who took the newsreel footage claimed it didn't tell the whole story. He said "he was changing lenses in his camera at the time of the strikers' attack and that his film shows an incomplete picture of what happened," according to the Tribune's coroner inquiry report. 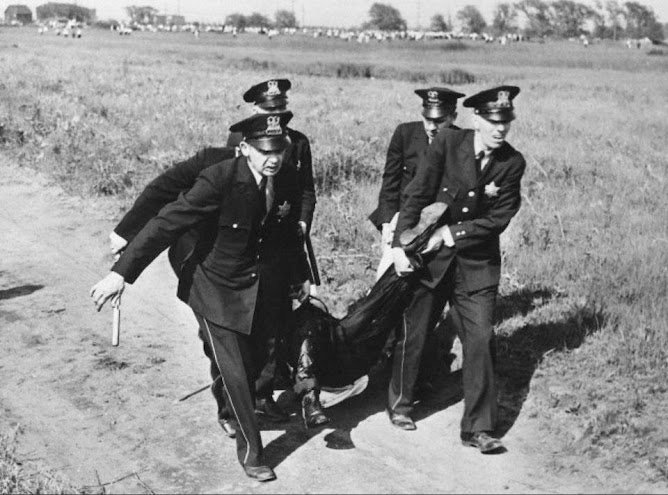 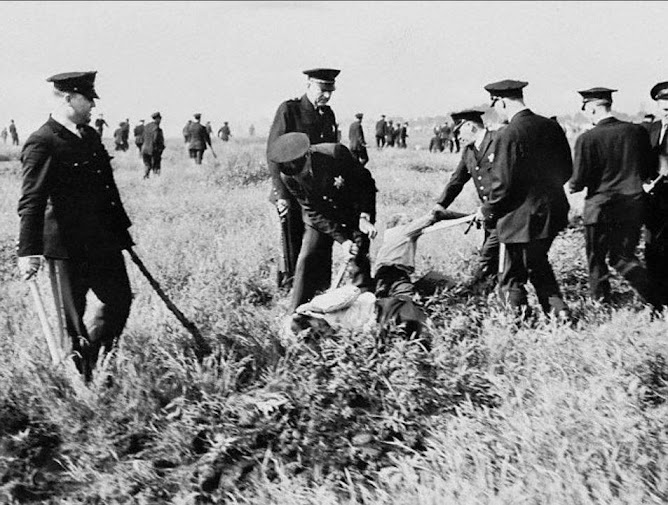 In the lean years of the 1930s, workplace disputes weren't limited to the classic standoff of bosses versus workers, which further divided contemporaries' views of violence. Some workers saw their salvation in banding together, and others, thinking themselves lucky to have a job, wanted no part of the union movement.
When the Republic Steel workers walked out, about 1,000 remained on the job, the company feeding and housing them on-site. "We got a good place to eat, sleep, and play," one told a Trib reporter. "Think I'm gonna quit with four kids?"
Angered by the nonstrikers' obstinacy, union members and their supporters set out on that fateful march from Sam's Place. What did they aim to do? According to the police, the demonstration was designed to be violent. A police captain said he had heard a leader at the meeting that preceded the march say, "We'll get those cops, knock them over, take their guns away from them, and go right into the plant." 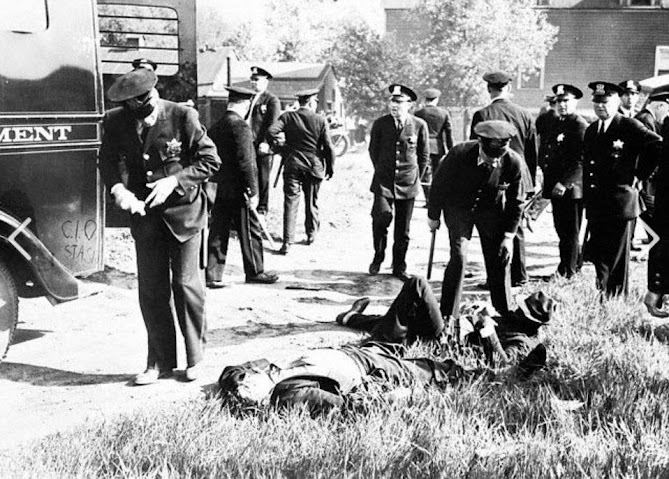 According to the Tribune, that was part of a larger conspiracy, "a plan to seize control of the country in the style and manner of the 1917 Russian October Revolution" (officially known as the Great October Socialist Revolution under the Soviet Union, aka The October Revolution, and the Bolshevik Revolution).
After Pastor William Waltmire of the Humboldt Park Community Methodist Church gave a eulogy to each of the slain strikers whose families chose the church for the funeral of their loved one, Pastor William told the story differently.

"The men lying here had a dream of brotherhood," said Pastor William, "They sought to begin a new world, a good world, in which all people could live free, follow their dreams, and be happy together."