Indian Creek Village is within today's DeKalb County's Shabbona Lake State Park, located north of Ottawa and approximately 6 miles west of Illinois Route 23. The settlement was the site of the Indian Creek Massacre during the 1832 Black Hawk War. There are no residents. 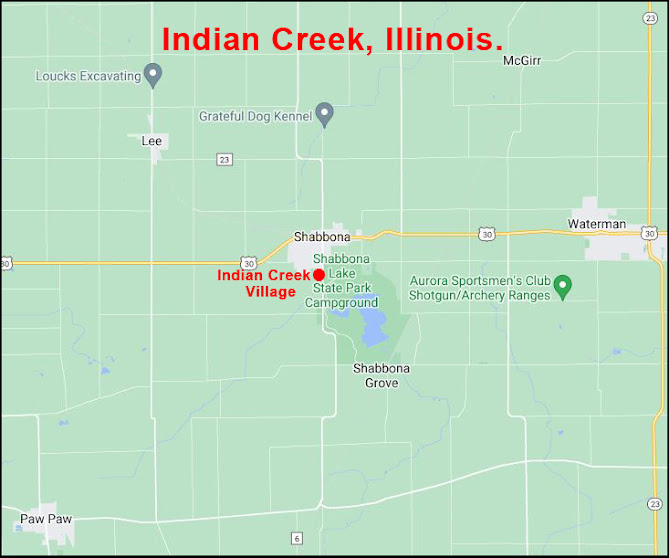 During the Black Hawk War (1832), the Shabbona area, including Indian Creek Village, was in LaSalle County, Illinois. DeKalb County, Illinois, was founded on March 4, 1837.

They were brought to our encampment, and a messenger sent to the Winnebago, as they were friendly on both sides, to come and get them, and carry them to the whites. If these young men belonging to my Band had not gone with the Potawatomi, the two young squaws would have shared the same fate as their friends.

A Ho-Chunk chief named White Crow negotiated their release. Like some other area Ho-Chunks, White Crow was trying to placate the Americans while clandestinely aiding the British Band. U.S. Indian agent Henry Gratiot paid a ransom for the girls of ten horses, wampum, and corn. The Hall sisters were released on June 1, 1832.
The Indian Creek massacre was one of the Black Hawk War's most famous and well-publicized incidents. The killings triggered panic in the white population nearby, and people abandoned settlements and sought refuge inside frontier forts, such as Fort Dearborn in Chicago.
On May 21 or 22, the people in Chicago, including those who had fled, dispatched a company of militia scouts to ascertain the situation along the Chicago-Ottawa trail. The detachment, under the command of Captain Jesse B. Brown, came upon the mangled remains of the 15 victims at Indian Creek on May 22. They buried the dead and continued to Ottawa, where they reported their gruesome discovery. As a result, the Illinois militia used the event to draw more recruits from Illinois and Kentucky.
After the war, three Indians were charged with murder for the Indian Creek massacre and warrants were issued at the LaSalle County Courthouse for Keewasee, Toquame, and Comee. The charges were dropped when the Hall sisters could not identify the three men as part of the attacking party. In 1833, the Illinois General Assembly passed a law granting both Hall sisters 80 acres of land each along the Illinois and Michigan Canal as compensation and recognition for their hardships.
In 1877, William Munson, who had married Rachel Hall, erected a monument where the massacre's victims were buried. The memorial, located 14 miles north of Ottawa, Illinois, cost $700 to erect. In 1902, the area was designated as Shabbona Park, and $5,000 was appropriated by the Illinois legislature for the erection and maintenance of a new monument. On August 29, 1906, a 16-foot granite monument was dedicated in a ceremony attended by four thousand people. Shabbona County Park, not to be confused with Shabbona Lake State Park in DeKalb County, is located in northern LaSalle County, west of Illinois Route 23.
Indian Creek Massacre and Captivity of Hall Girls, pub 1915, 133 pages.
Compiled by Dr. Neil Gale, Ph.D.
Presented by Dr. Neil Gale, Ph.D. at 9/18/2022 08:08:00 PM

Email ThisBlogThis!Share to TwitterShare to FacebookShare to Pinterest
Living History of Illinois and Chicago® IL Northeast, Lost Towns of Illinois, Maps and Plats