The Life & Times of Billy Caldwell, Whose History was Mostly Fabricated.

In historical writing and analysis, PRESENTISM introduces present-day ideas and perspectives into depictions or interpretations of the past. I believe presentism is a form of cultural bias, creating a distorted understanding of the subject matter. Reading modern notions of morality into the past is committing the error of presentism. I'm well aware that historical accounts are written by people and can be slanted, so I try my hardest to present fact-based and well-researched articles without interjecting any of my personal opinions.

The use of old commonly used terms, disrespectful today, i.e., REDMAN, SAVAGES, and HALF-BREED, are explained in THIS ARTICLE.

Believe it or not, most of Billy Caldwell's history was fabricated. 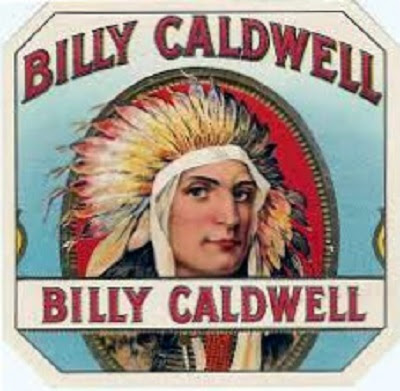 Billy Caldwell is a figure of legends but was a real person. Untangling his story has kept historians busy for about two hundred years.

William "Billy" Caldwell Jr. was born near Fort Niagara, in upper New York, on March 17, 1780. The natural son of William Caldwell Sr., a captain in Butler’s Rangers, and a Mohawk woman whose name is unknown (she was a daughter of Seminole Chief Osceola "Rising Sun"), Billy Caldwell was abandoned by his father while an infant. There’s some evidence that Billy was baptized as Thomas.

Caldwell Sr. was ordered west to Detroit. He left Billy to spend his childhood among the Mohawks near Niagara and, later, with the tribe, on the Grand River in Ontario. About 1789, Caldwell Sr. brought Billy back into the family, created by his marriage to Suzanne Reaume Baby (birthed 22 children; 11 survived infancy) at Detroit. There, at 9 years old, Billy Caldwell received a basic education aimed at making him into a family retainer (British English: Domestic worker or servant, especially one who has been with one family for a long time), the manager of the Caldwell farm on the south side of the Detroit River. Billy rejected the status of a second-class son.

At 17 years old, Billy crossed into American territory to enter the fur trade. Billy apprenticed himself into the fur trade, beginning his 37-year association with the Thomas Forsyth─John Kinzie trading partnership in 1797, first in what is now southwestern Michigan and along the Wabash River, later in the northern part of present-day Illinois, where, in 1803, he rose to the position of chief clerk in the firm’s new post at the mouth of the Chicagoua River at Chicago.
A Potawatomi woman named La Nanette, of the powerful 'fish clan,' was his first wife. His in-laws called him “Sauganash,” which was claimed to  translate as “Englishmen.” La Nanette died shortly after the marriage, whereupon he married a daughter of Robert Forsyth and an Ojibwa woman. After his second wife’s death, he again married, this time a person known only as "The 'Frenchwoman," likely the daughter of an influential Métis trader in Chicago. He had some eight to ten children in all, none of whom lived to adulthood or survived him.
By early 1812 he was reputed to be especially influential among the powerful Potawatomi, Ottawa, and Ojibwa communities around Lake Michigan, so both American and British officials vied for his services in the coming war.
Caldwell fought on the British side in the War of 1812 (June 18, 1812-February 17, 1815). Afterward, he lived in Canada. When several business ventures failed, he moved back to Chicago. In Chicago, Caldwell worked in the Indian trade as a merchant and as an appraiser. He made friends among the settlement’s leaders. Because of his tribal connections and his fluency in several Indian languages, he smoothed relations between the Americans and the native peoples.
Until 1820 Caldwell identified himself as a “True Briton,” remaining faithful to the values he had acquired in the Detroit River border communities where he was raised, in spite of the fact that his father never recognized him as his rightful eldest son.

It was in Chicago between 1827 and 1833 that various legends and myths grew up concerning Caldwell’s ancestry, rank, and social status, which eventually made him a “half-breed principal chief” of the Potawatomi. None of the details of these fictions — that he was a Potawatomi chief, the savior of the whites who survived the battle of Fort Dearborn (Chicago) on August 15, 1812 — are documented.

As the myth goes: Caldwell arrived on the scene just after the Potawatomi attacked the American garrison at Fort Dearborn on August 15, 1812, and saved the lives of the John Kinzie family.

Another unproven story: In 1828 the U.S. Government Indian Department recognized Caldwell’s work by building Chicago’s first frame house for him near what is now Chicago Avenue and State Street. The next year he was appointed as "Chief Sauganash" of the Potawatomi Tribe. The Potawatomi knew that the Americans were going to force them out of the area. They wanted to get the best deal possible. Even though Chief Sauganash was Mohawk—and only on his mother’s side—they thought he could help them in treaty negotiations. So they accepted him as a tribal Chief.

They represent the fabrications of his employers, who had him appointed as an American-recognized Chief; to better serve their business interests. Some legendary elements, for example, the fable that he was Tecumseh’s private secretary (Tecumseh was a Shawnee chief, warrior, diplomat, and orator who promoted resistance to the expansion of the United States onto Native American lands.), represented Caldwell's own embellishments. Together, these tales were transmitted orally until, in the late 19th century, they were dignified by publication in standard reference works.

Billy Caldwell's Potawatomi-given name, Sagaunash, as it turns out, was not a personal name at all, but an ethnic label, "sakonosh," by which the Potawatomi identified Caldwell as an “English-speaking Canadian.”

In 1830 the Potawatomi started signing off their land. Caldwell became a folk hero among the American settlers. Chicago’s first hotel was named the "Sauganash" in his honor. The U.S. government awarded him a 1600-acre tract of land northwest of Chicago named the Billy Caldwell Reserve. He lived there with his Potawatomi band for three years.
Caldwell was influential in aiding the negotiation of the final series of treaties signed by the United Bands of Potawatomi, Ottawa, and Ojibwa of Wisconsin and Illinois, which ended in 1833 when they ceded their last block of lands at the Treaty of Chicago.
His services were no longer needed. Caldwell was then abandoned by his American patrons and thereafter entered the full-time employ of the united bands. He migrated with them to western Missouri and Iowa and lived in what became Council Bluffs, Iowa, where he made his final home, managing their business affairs and negotiating on their behalf with American officials until his death.
This marker at Rogers and Kilbourn in Chicago's Sauganash neighborhood commemorates the “Treaty Elm,” originally a frontier trail marker used in the Billy Caldwell reserve's first and second government surveys. The elm stood until 1933. Although the marker claims the Prairie du Chien treaty was signed under the elm, records show the document was actually signed at Fort Dearborn. Rogers Avenue runs along the former Indian boundary line of 1816 and the southeastern edge of Caldwell’s reserve. In 1912 a small portion of the Billy Caldwell Reserve, 260 acres, was purchased by the real estate firm Koester and Zander and named it “Sauganash.” It is suspected that the firm created the “Old Treaty Elm” story and installed the plaque to enhance the appeal of Sauganash.

Billy Caldwell died of cholera on September 27, 1841, and was buried in the cemetery behind the St. Joseph Indian Mission, which was founded in 1838, where the Jesuits served the Potawatomi. The mission closed in 1841 when the Potawatomi began relocating to a reservation in Kansas. In 1857 the bluff was cut down, and the graves were reinterred in the “Old Catholic Cemetery,” located somewhere on the bluff that is now Saint Joseph Cemetery, Council Bluffs, Pottawattamie County, Iowa. Then the only marker was a wooden sign, long gone, marked “Indians.”