THE HAWTHORNE WORKS
The Hawthorne Works was a large Western Electric Company factory complex in Cicero, Illinois.
Cicero began as separate settlements that gradually expanded into one community. On June 23, 1857, a local government was organized for the district named "The Town of Cicero." Railroads, immigration, and the Civil War contributed to economic growth in the new township, which by 1867 incorporated the municipality and the Town of Cicero.
By 1889, Chicago had annexed more than half of the original Town. An 1899 referendum ceded the Austin neighborhood to Chicago, and in the following year, land containing a race track was transferred to Stickney Township. The Town of Cicero retained less than six of the 36 square miles carved out in 1849.
Cicero is comprised of eight neighborhoods, each with its own district names and characteristics. Two were named for businesses; Hawthorne for an 1850s quarry, the first industry in what later became Cicero, and Grant Works after an 1890 locomotive factory. The other six are Boulevard Manor, Clyde, Drezel, Morton Park, Parkholme, and Warren Park.

The Hawthorne Works complex was built at Cicero Avenue and Cermak Road. The facility consisted of several buildings and contained a private railroad, "Manufacturers Junction Railroad," to move shipments through the plant to the nearby Chicago, Burlington, and Quincy Railroad freight depot. In the first decades, the factory complex was significantly expanded.

Charles M. Prchal was born in 1896 in Golcuv Jenikov, a small town southeast of Prague, then part of the Austro-Hungarian Empire, now in the Czech Republic. In August 1911, he journeyed alone to America and settled in Chicago, furthers his education at night school, finds employment at Western Electric’s Hawthorne Works, and builds a lifelong career there. It’s a scenario repeated thousands of times at General Electric's Hawthorne Works, but it’s backed by fact, not legend.
Prchal joined Western Electric in 1918, just as the Hawthorne Works launched another of its frequent expansion projects. He worked days while studying architectural drafting and structural engineering at night school.
His first big assignment was the design of the seven-story tower at the northwest corner of the Works complex. The 183-foot-tall red-brick spire housed the elegant executive offices on its top floor. At its dedication in 1919, Western Electric president Charles DuBois proclaimed the structure the symbol of Hawthorne’s past and future, created by “hard work of hand and brain, and square dealing with everyone.” At the Works Silver Jubilee in 1978, Prchal agreed that the tower had “always been a symbol of the promise of sixty years ago—the promise of a great manufacturing plant and its thousands of employees producing important equipment.”
Later in his career, Prchal designed the Tivoli Theater in Downers Grove and the domed mausoleum at Chicago’s Bohemian National Cemetery. He also served for thirty-two years as the president of the American Sokol, an organization dedicated to preserving Bohemian culture and providing guidance to youth through social and athletic programs. After a forty-three-year career, Prchal retired from Western Electric but remained active as a lecturer, author, and member of many social and fraternal societies until he died in 1980.
Although his most impressive design has been gone since 1987, the image of Mr. Prchal’s tower still represents the Hawthorne Works to everyone who recalls its glory days. And his life story illustrates the accomplishments of the many humbly-born immigrants who found an outlet for their potential during America’s industrial golden age.

In 1915, Western Electric was associated with one of the worst accidents in Chicago's history. The SS Eastland, a boat filled with Hawthorne Works employees and family members attending the company's annual outing, capsized at its dock in the Chicago River, killing over 800 people. 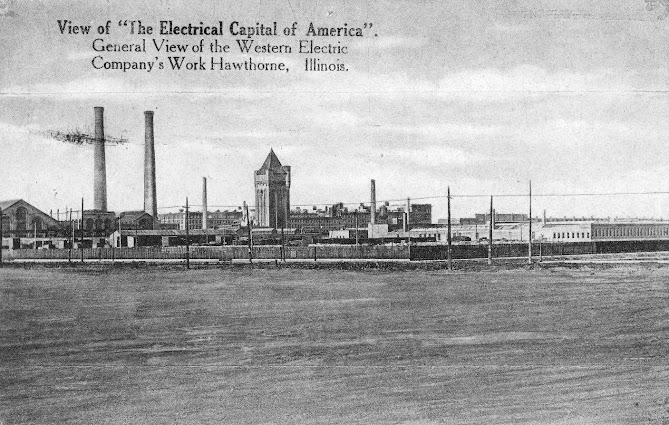 Researchers at the Hawthorne Works pioneered new technologies such as the high-vacuum tube, the condenser microphone, and radio systems for airplanes during the 1910s.
By 1917, the Hawthorne Works facility employed 25,000 people, many of them Cicero residents of Czech and Polish descent, who produced telephone, cable, and every major telephone switching system in the country. In 1900, 676,733 Bell Telephone stations were owned and connected in the country. By 1910, three years after Hawthorne Works opened, these 25,000 employees produced 5,142,699 telephones, and by 1920, 11,795,747 Bell telephones. Over 14,000 different types of apparatus were manufactured at the plant to provide the telecommunications infrastructure for this exponential growth. During the plant's early years into the 1920s, Western Electric was also a major producer of household appliances.
During the Great Depression (1929-1933), the company laid off thousands of workers, but business recovered during World War II. During the war years, when it was subject to federal rules for government contracts, the company began to employ negroes for the first time.
On the eve of World War II (1939-1942), roughly 90% of demand for Western Electric's products came from one customer, the Bell System. By mid-1941, 85% of the demand for products came from the federal government, for which the company provided more than 30% of all electronic gear for war, including radar equipment.
When World War II (1939-1942) started, the U.S. government called on Hawthorne Works to engineer and manufacture mass quantities of the most modern and capable communications and radar equipment.

The Hawthorne Works produced a large output of telephone equipment. In addition, Western Electric produced various consumer products and electrical equipment, including refrigerators and electric fans.
The works employed up to 45,000 employees at the height of operations in WW II. Workers regularly used bicycles for transit within the plant. 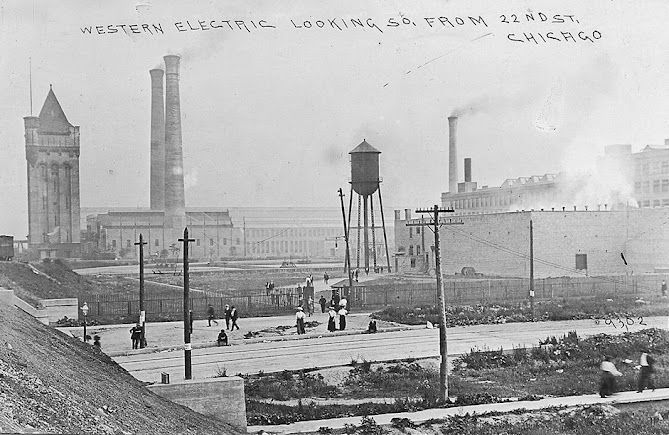 WESTERN ELECTRIC PERKS LEAD TO EMPLOYMENT LONGEVITY
Hawthorne Works benefited greatly by keeping workers happy. There were company-owned, not-for-profit restaurants and cafeterias within the complex. Employees of all statures could have quality hot breakfasts and lunches at drastically reduced prices.
Other perks included: a hospital and numerous "first-aid" rooms spread around the complex; a shoe store; eye care, glasses, and repairs; a store that carried items like men's ties, greeting cards, sundries, snacks, and even women's nylons.
Hawthorne recognized individual milestones in employment with service pins and a dinner. Retirement celebrations were quite elaborate. The entire department would be invited to a fancy dinner, a boutonnière for the retiree, and a corsage and beautiful flower arrangement for the retiree's wife.

As a means of providing outlets for the many Hawthorne Works employees who have interests or hobbies in common, a number of associated clubs have been formed; the Boot and Saddle Club, Camera Club, Chess and Checker Club, Coin Club, Excursion Club, Flower and Garden Club, The Forum, Players Club, Hunting Club, Fishing Club, Male Chorus, Mixed Chorus, Science Club, Stamp Club, and the Flying Club.

But the pièce de résistance was the yearly "Hello Charley Girl" contest.

The Origin of Hello Charley.
Newcomers were often confused during the Merrimack Valley Works, North Andover, Massachusetts (opened 1953), "WE Valley Girl" Contest by long term employees referring to the Queen as the "Hello Charley Girl."
Originally a vacation queen contest. The winner took the name of the greeting that Western Electric employees used when discovering a fellow "Westerner" on vacation.
Why "Hello Charley" and not Phillip?

The greeting grew from an incident involving Charley Drucker, a benefits serviceman in the old days of the Hawthorne Works in Cicero, Illinois. A pensioner whom he had visited wrote him a letter addressed "Charley, Western Electric." Since the retiree had not remembered Charley's last name, the letter made the rounds until finding the right Charley.
Since this letter people began addressing each other as "Charley Western." Soon the greeting spread throughout the company. Every location nationwide has its vacation queen.

THE DEATH OF THE HAWTHORNE WORKS
The Hawthorne Works announced its closing in 1983 because most of its operations had been distributed to more modern facilities around the country. In 1986 the shutdown was completed. The Foundry and most of the Telephone Apparatus buildings were demolished between 1975 and 1983. The remaining Telephone Apparatus buildings and the Executive Tower were razed in 1986 and 1987. The rest of the Hawthorne Works was demolished in 1994.
The only survivors are the Water Tower and the Cable building at 4545 West Cermak Road.
The property was purchased in the mid-1980s by the late Donald L. Shoemaker and replaced with a shopping center. 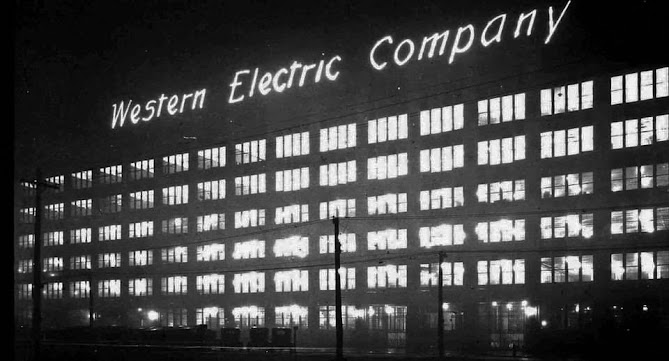 Was there Really a Hawthorne Effect at the Hawthorne Plant?

Rethinking the Hawthorne Studies: The Western Electric research in its social, political and historical context.