John Franklin Farnsworth was a resident of St. Charles. He was an attorney, founder of the Republican Party, congressman, as well as a personal friend of Abraham Lincoln. In 1858, he advised Lincoln during the famous Lincoln-Douglas debates, and in 1860 nominated Lincoln for president during the Republican Party Convention. Farnsworth was also called to the bedside of the dying President at the Petersen House after Lincoln was shot at Ford's Theatre in 1865.

Without Farnsworth's influence, Camp Kane would not have been so successful. Farnsworth had no problems in fulfilling the 1,200-man quota. Approximately one in six men from St. Charles served in the regiments. Recruits also came from as far as Indiana, Iowa, and Michigan.
After the Civil War began, Farnsworth requested permission from his friend, President Lincoln, to commission a volunteer cavalry regiment and train them in St. Charles, Illinois, on property Farnsworth owned. The commission was approved on August 11, 1861. Abraham named the new regiment "Farnsworth's Big Abolitionist Regiment." Farnsworth was promoted to Colonel.
Camp Kane officially opened for training on September 18, 1861, with 1,164 men who mustered in. It was the only Civil War Training Camp in Kane County that became home to the 8th Illinois Cavalry and later the 17th Illinois Cavalry.
In February 1864, extensive barracks were built on the Lovell property, in the north part of the city, which received the designation of Camp Kane, and in February 1864, these were temporarily occupied by the Fifty-second Regiment, then at home for a short time. The regiment received large accessions from the place on a redeparture for the front in March of the same year, and in the June following the One Hundred and Fortieth Illinois Volunteers, marched from Camp Kane. Elgin contributed two companies to the regiment. Besides these mentioned, Elgin contributed many soldiers to other organizations, and from the day, in the early spring of 1861, that the first company left it, until the happy midsummer, four years after, that the war's last veteran marched proudly home, Elgin was never derelict to the calls of the struggling, but at last victorious republic.
Colonel Farnsworth was close friends and political allies with Joseph Medill, Chicago Tribune Editor, and co-owner. Medill was also an abolitionist and used the Tribune for the cause. Once approval was granted to form the 8th Illinois Cavalry, Medill promoted recruiting in the Tribune. Even William Medill, Joseph's brother volunteered.
Despite its size, St. Charles gave one of the largest quotas of troops in all of Kane County. St. Charles residents such as General Farnsworth, Captain Elliott, Major Van Patten, Major John Waite, Captain Beach, Captain McGuire, Colonel Gillett, Major (Judge) Barry, Lieutenant Durant, and Dr. Crawford all aided in the war effort. These names are among the most important in the history of St. Charles.. 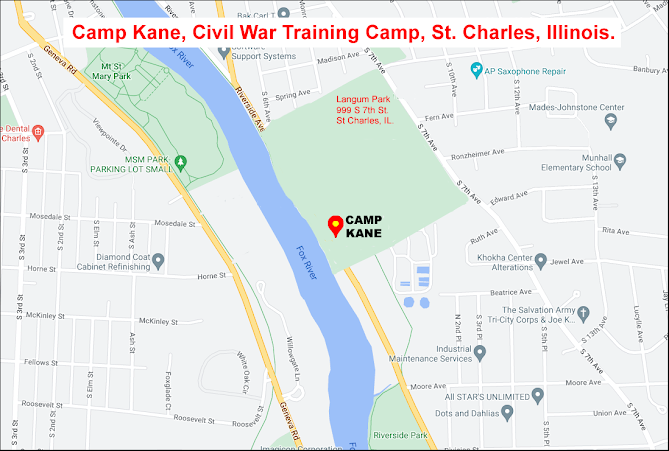 Following the war, men of the 8th Cavalry continued to serve their country. In April 1865, they took part in the search for Abraham Lincoln's assassin, John Wilkes Booth, and also guarded the President's body.

General Farnsworth and Colonel John Beveridge commissioned the 17th Illinois Cavalry in early 1863. Most of their service was in Missouri. They trained at Camp Kane in the early months of 1863 and Camp Kane remained an active training camp until early 1864. 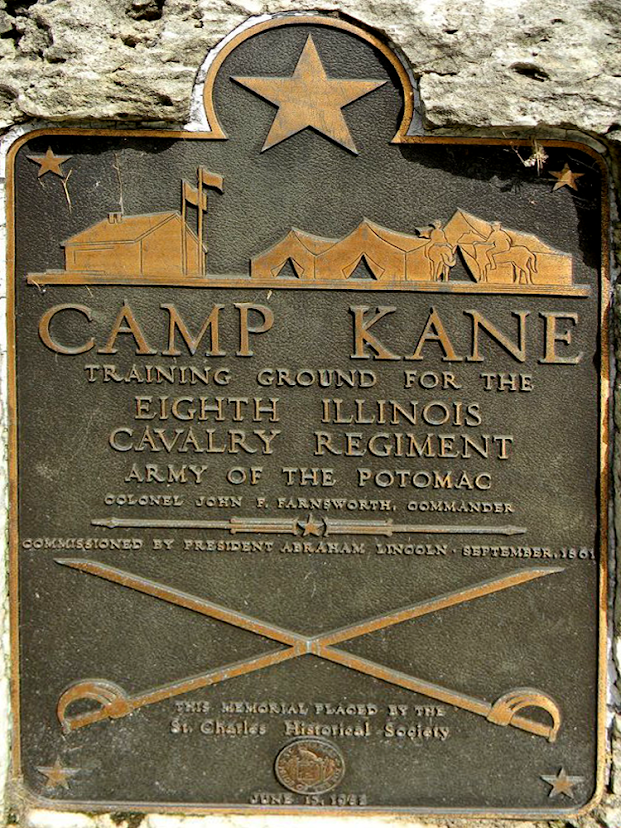