Wm. Pethick Murders a Young Mother and her 2 year old in 1915. Now, for the Rest of the Story.

On May 6, 1915, a 22-year-old man named William Russell Pethick worked as a deliveryman in Chicago when he delivered groceries to a home owned by the Coppersmith family. Ella Coppersmith, age 28, was home with her two-year-old son Jack.
Ella attempted to pay Pethick with a ten-dollar bill, and a dispute arose over the change. At one point, Pethick reached for Ella’s blouse, and she hit him in the face. He fractured her skull with a hammer. Pethick grabbed a kitchen knife and stabbed her repeatedly. As she lay dying, her two-year-old son came into the kitchen. 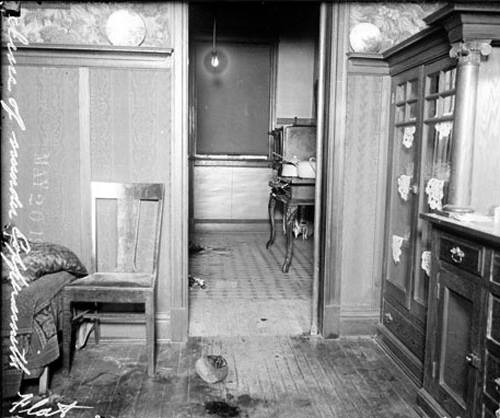 Thinking the boy could identify him, Pethick killed him by slashing the boy’s throat. Then this happened... Pethick, a necrophiliac, sexually abused Ella Coppersmith's corpse (from Clarence Seward Darrow's court docket; Pethick's lawyer).
The site of the murders at 7100 South Lowe Avenue in the Englewood community of Chicago is a well-maintained, empty lot.

NOTE: Clarence Seward Darrow followed the news about the murders and was fascinated by the case. He was convinced that Pethick was mentally ill. He offered to defend the accused, and Pethick’s father gladly accepted. Darrow knew that a jury would very likely convict his client instead of finding him not guilty by reason of insanity.

Darrow surprised the prosecution by having Pethick plead guilty on the first day of trial. Darrow then pleaded with the judge to take into account Pethick’s mental defects to mitigate punishment. He brought in experts to testify about Pethick’s mental problems. The prosecution tried to counter the defense’s testimony. In the end, the judge sentenced Pethick to life in Joliet prison instead of the death penalty.

In several ways, the case was a dress rehearsal for the Leopold and Loeb case in 1924. Pethick spent 47 years in prison before being paroled on December 21, 1962. According to a news account, Pethick was paroled to the Salvation Army and would live and work at the Men’s Social Service Station in Chicago.

Coppersmith is buried at Mount Olivet Catholic Cemetery, Chicago, Cook County, Illinois.
DOUBLE SLAYER OF COPPERSMITHS BELIEVED CAUGHT
Chicago Tribune, May 13, 1915
The murderer of Mrs. Ella Coppersmith and her 3-year-old son, who was slain in their residence at 7100 South Lowe Avenue a week ago today, is believed by the police to be in custody.
The suspect and two companions were arrested yesterday. Secrecy as to the man's identity is maintained by the detectives. The capture was of such importance that Chief Healey was informed of it.
A sore finger on the left hand of the suspect is one of the reasons for believing that he is the slayer of mother and son. A rag that had slipped, or was torn from the murderer's finger, was found on the kitchen floor of the Coppersmith house.
At what station the suspect and his two companions are locked up could not be learned. It was said, however, that they were arrested In a West Madison street "barrelhouse" and taken to an outlying station.
From a habitué of the saloon in which the three men were arrested, the detectives learned the trio robbed a clothing store in South Chicago on Monday night. Part of the proceeds of the burglary was peddled along "West Madison Street.
The police Informant overheard the three men discussing the clothing store "job," and they also mentioned the Coppersmith case.
One of the men - the one with the sore finger - was heard to say he was going to get out of town. "Wagon" and "alley" were words that were heard by the stool pigeon who "tipped" the police. It Is known that a wagon was In the alley at the rear of the Coppersmith home at the time of the murder.
"What are you getting scared about?" one of the men asked the man with the sore finger." The police have pinched three or four fellows for the job, and they don't know where they're at."
After further conversation, they planned to go to Gary, Indiana, last night to do a "job" there. The man who had overheard the talk notified a detective who had once befriended him. The arrest of the trio, all ex-convicts, followed.
Each of the prisoners was questioned about the Coppersmith murder, but all of them denied knowledge of the case except what they had read in the newspapers. The one suspected of the murder said he had been in this city only since last Saturday.
VICTIM'S MATE FIGHTS PAROLE FOR KILLER OF TWO
Chicago Daily Tribune, July 2, 1956
Rape Murderer Serving Life Since 1915. (41 years)
William Russell Pethick, now 62, who pleaded guilty to the 1915 knife slayings of a Chicago mother and her infant son, will seek his freedom from a life sentence in a hearing before the state parole and pardon board on July 10th at Stateville Prison (maximum security) in Crest Hill, Illinois.
The victims of the slayings were Mrs. Ella Coppersmith, 28, and her son, John Jr. They were killed in their home at 7100 South Lowe Avenue on May 6, 1915. Pethick was sentenced on September 28, 1915.
Mate Opposes Plea. Mrs. Coppersmith's husband, John now of Washington, Wisconsin, opposed Pethick's plea for freedom.
In a letter to the board, Coppersmith wrote that only the wiles of the late Clarence Darrow, who defended Pethick, saved Pethick from the hangmen. Coppersmith labeled the killings cruel and senseless.
Fingerprints, which at that time were not widely used as a method of identification, led to Pethick's capture and confession. A ruse was used to get Pethick's fingerprints, and police matched them to bloody ones found in the home.
Returns with Knife. Pethick, then 22, delivered a grocery order to the Coppersmith home. He told the young wife he didn't have change and would return in the afternoon. When he returned, he carried a butcher knife with which he slashed the woman s throat.
Pethick raped her as she lay bleeding on the floor. When the child entered the room, Pethick slashed his throat. He ransacked the home, stealing $100 and a gold wristwatch. Police later recovered the wristwatch from a drain in the shop where Pethick worked.
Compiled by Dr. Neil Gale, Ph.D.
Presented by Dr. Neil Gale, Ph.D. at 4/28/2022 01:45:00 PM