A 1900 Description of Chicago's World's Columbian Exposition in 1893.

An exhibition of the scientific, liberal, and mechanical arts of all nations, held in Chicago, between May 1 and Oct. 31, 1893. The project had its inception in November 1885, in a resolution adopted by the directorate of the Chicago Inter-State Exposition Company. On July 6, 1888, the first well-defined action was taken, the Iroquois Club, of Chicago, inviting the cooperation of six other leading clubs of that city in “securing the location of an international celebration at Chicago of the 400th anniversary of the discovery of America by Columbus.” In July 1889, a decisive step was taken in the appointment by Mayor Cregier, under the resolution of the City Council, of a committee of 100 (afterward increased to 256) citizens, who were charged with the duty of promoting the selection of Chicago as the site for the Exposition. New York, Washington, and St. Louis were competing points, but the choice of Congress fell upon Chicago, and the act establishing the World's Fair in that city was signed by President Harrison on April 25, 1890. Under the requirements of the law, the President appointed eight Commissioners-at-large, with two Commissioners and two alternates from each State and Territory and the District of Columbia. Col. George R. Davis, of Chicago, was elected Director-General by the body thus constituted. Ex-Senator Thomas M. Palmer, of Michigan, was chosen as President of the Commission and John T. Dickinson, of Texas, as Secretary. This Commission delegated much of its power to a Board of Reference and Control, who were instructed to act with a similar number appointed by the World's Columbian Exposition. The latter organization was incorporated, with a directorate of forty-five members, elected annually by the stockholders. Lyman J. Gage, of Chicago, was the first President of the corporation and was succeeded by W. T. Baker and Harlow N. Higinbotham. 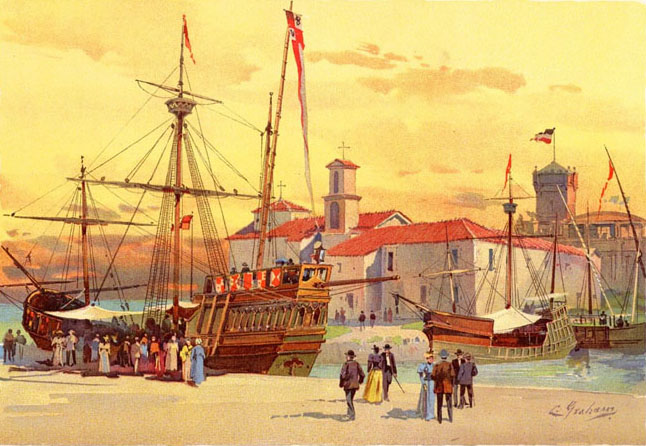 In addition to these bodies, certain powers were vested in a Board of Lady Managers, composed of two members, with alternates, from each State and Territory, besides nine from the city of Chicago. Mrs. Potter Palmer was chosen President of the latter. This Board was particularly charged with the supervision of women's participation in the Exposition, and of the exhibits of women's work. 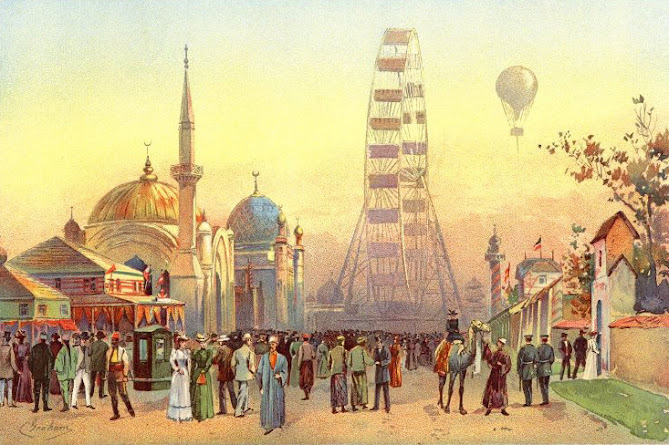 The supreme executive power was vested in the Joint Board of Control. The site selected was Jackson Park, in the South Division of Chicago, with a strip connecting Jackson and Washington Parks, known as the “Midway Plaisance,” which was surrendered to “concessionaires” who purchased the privilege of giving exhibitions, or conducting restaurants or selling booths thereon. The total area of the site was 633 acres, and that of the buildings - not reckoning those erected by States other than Illinois, and by foreign governments - was about 200 acres. When this is added to the acreage of the foreign and state buildings, the total space under the roof was approximately 250 acres. These figures do not include the buildings erected by private exhibitors, caterers, and vendors, which would add a small percentage to the grand total. Forty-seven foreign Governments made appropriations for the erection of their own buildings and other expenses connected with official representation, and there were exhibitors from eighty-six nations. The United States Government erected its own building and appropriated $500,000 to defray the expenses of a national exhibit, besides $82,500,000 toward the general cost of the Exposition. The appropriations by foreign Governments aggregated about $86,500,000, and those by the States and Territories, $6,120,000 - that of Illinois being $8,800,000. The entire outlay of the World's Columbian Exposition Company, up to March 31, 1894, including the cost of the preliminary organization, construction, operating, and post-Exposition expenses, was $27,151,800. This is, of course, exclusive of foreign and State expenditures, which would swell the aggregate cost to nearly $845,000,000. Citizens of Chicago subscribed $5,608,206 toward the capital stock of the Exposition Company, and the municipality, $5,000,000, which was raised by the sale of bonds. 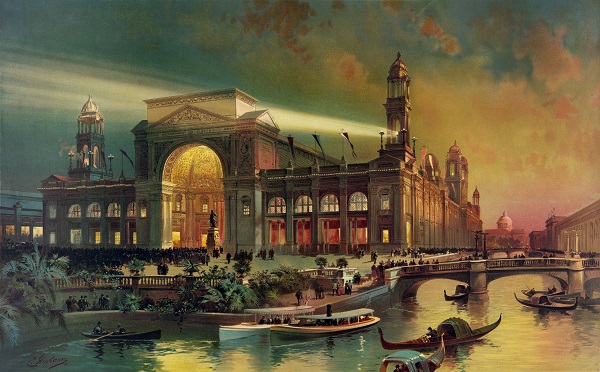 The site, while admirably adapted to the purpose, was, when chosen, a marshy flat, crossed by low sand ridges, upon which stood occasional clumps of stunted scrub oaks. Before the gates of the great fair were opened to the public, the entire area had been transformed into a dream of beauty. Marshes had been drained, filled in, and sodded; driveways and broad walks constructed; artificial ponds and lagoons dug and embanked, and all the highest skill of the landscape gardener's art had been called into play -to produce varied and striking effects. But the task had been a Herculean one. There was seventeen principal (or, as they may be called, departmental) buildings, all with the beautiful and ornate design, and all of the vast size. They were known as the Manufacturers' and Liberal Arts, the Machinery, Electrical, Transportation, Woman's, Horticultural, Mines and Mining, Anthropological, Administration, Art Galleries, Agricultural, Art Institute, Fisheries, Live Stock, Dairy and Forestry buildings, and the Music Hall and Casino. Several of these had large annexes. The Manufacturers' Building was the largest. It was rectangular (1687x787 feet), having a ground area of 31 acres and a floor and gallery area of 44 acres. Its central chamber was 1280x380 feet, with a nave 107 feet wide, both hall and nave being surrounded by a gallery 50 feet wide. It was four times as large as the Roman Coliseum and three times as large as St. Peter's in Rome; 17,000,000 feet of lumber, 13,000,000 pounds of steel, and 2,000,000 pounds of iron had been used in its construction, involving a cost of $1,800,000. It was originally intended to open the Exposition, formally, on Oct. 21, 1892, the quadricentennial of Columbus' discovery of land in the Western Hemisphere, but the magnitude of the undertaking rendered this impracticable. Consequently, while dedicatory ceremonies were held on that day, preceded by a monster procession and followed by elaborate pyrotechnic displays at night, May 1, 1893, was fixed as the opening day - the machinery and fountains being put in operation, at the touch of an electric button by President Cleveland, at the close of a short address. The total number of admissions from that date to Oct. 31, was 27,530,460 - the largest for any single day being on Oct. 9 (Chicago Day) amounting to 761,944. The total receipts from all sources (including National and State appropriations, subscriptions, etc.), amounted to $28,151,168.75, of which $10,626,330.76 was from the sale of tickets, and $3,699,581.43 from concessions. The aggregate attendance fell short of that at the Paris Exposition of 1889 by about 500,000, while the receipts from the sale of tickets and concessions exceeded the latter by nearly $5,800,000. Subscribers to the Exposition stock received a return of ten percent on the same. 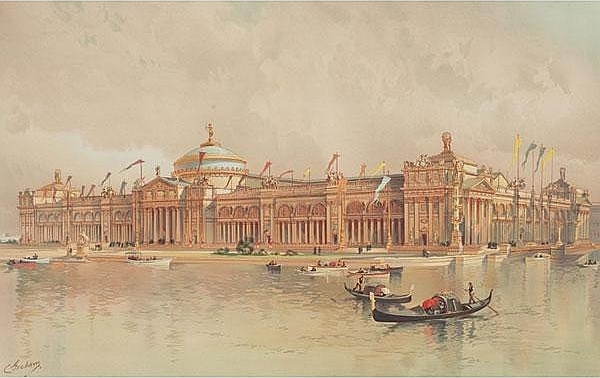 The Illinois building was the first of the State buildings to be completed. It was also the largest and most costly but was severely criticized from an architectural standpoint. The exhibits showed the internal resources of the State, as well as the development of its governmental system, and its progress in civilization from the days of the first pioneers. The entire Illinois exhibit in the State building was under the charge of the State Board of Agriculture, who devoted one-tenth of the appropriation, and a like proportion of floor space, to the exhibition of the work of Illinois women as scientists, authors, artists, decorators, etc. Among special features of the Illinois exhibit were: State trophies and relics, kept in a fire-proof memorial hall; the display of grains and minerals, and an immense topographical map (prepared at a cost of $15,000), drafted on a scale of two miles to the inch, showing the character and resources of the State, and correcting many serious cartographical errors previously undiscovered.
Presented by Dr. Neil Gale, Ph.D. at 8:02 PM